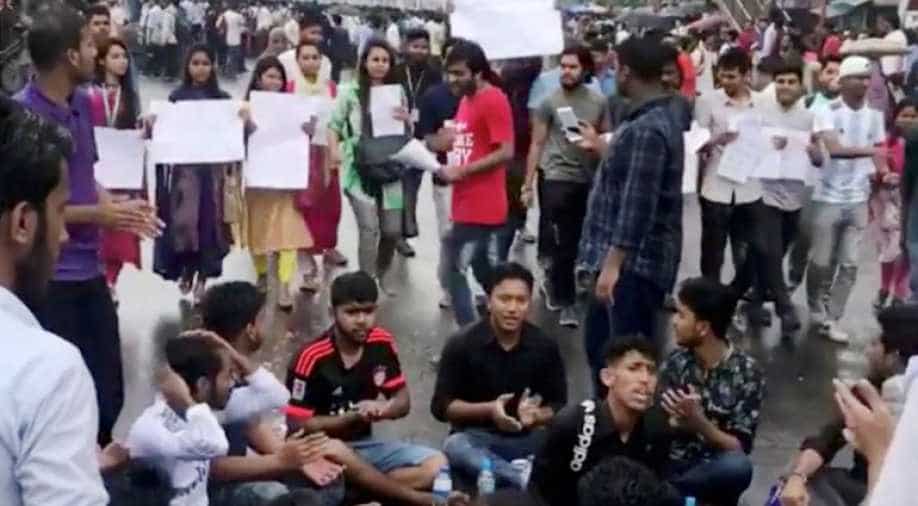 Bangladesh's main opposition party, in disarray since its leader Khaleda Zia was jailed in February, received an unexpected boost this month - days of protests by tens of thousands of students that have shaken the government ahead of a December election.

What began as an outpouring of anger over the failings of an unregulated transport industry after a speeding bus killed two students in Dhaka, quickly escalated into the widest anti-government protests in the South Asian nation in years, providing a focus for discontent with what critics see as Prime Minister Prime Minister Sheikh Hasina's increasingly authoritarian rule.

"The government is trying to control everything," said Rabiul Alam, 28, who works in a curtain showroom in Dhaka. "There is no space, no freedom, no democracy. You can't even criticise the government on Facebook."

Alam, who is a voter in his hometown in Barishal, in southern Bangladesh, said he would vote for the first time this year - for Khaleda's Bangladesh Nationalist Party (BNP). Analysts say such views are on the rise around the country.

The protests, which saw students directing traffic for days in the choked streets of Dhaka, demanding to check drivers' licences and vehicles' roadworthiness, have put Hasina and her ruling Awami League on the defensive in the run-up to an election she was widely expected to win.

The BNP says it was not involved in starting the protests, but is looking to capitalise on the opening they have been offered with rallies across the country aimed at pressuring the government to release its leader.

"The protest was spontaneous and non-political," said BNP secretary-general Mirza Fakhrul Islam Alamgir. "The students have showed us the state is in need of repair."

The government has blamed the BNP for inciting the students.

To quell the protests, Hasina announced compensation to the victims' families and the government agreed to raise the maximum jail time for rash driving to five years from three.

But heavy-handed policing of demonstrations and a wave of arrests fuelled accusations that free speech is increasingly being curtailed. The government said its actions were necessary to restore order.

The protests erupted after the driver of a speeding private bus lost control in a congested part of Dhaka and ploughed into a bus stop, killing two students. Most private bus drivers in Bangladesh do not get paid a salary, but earn commission for the number of people they pick up, leading them to race each other for passengers.

Demonstrations quickly spread to the cities of Chittagong, Khulna, Rajshahi, Sylhet, Rangpur and Mymensingh, as the protests struck a chord.

Hasina's government, which began her term in 2009 cracking down on Islamist groups and sending top leaders to the gallows for war crimes during the 1971 independence war, is seen by some as increasingly high-handed after nearly a decade in power.

In February, a court handed Khaleda, a two-term prime minister with whom Hasina shares a long and bitter rivalry, a five-year sentence for corruption - charges that she says are part of a plot to keep her and her family out of politics.

In recent months, Hasina has faced criticism that her political opponents are being swept up in the ongoing drive against militancy, corruption and drugs, which has also seen security forces accused of overstepping the law.

The police's response to the protests - by firing rubber bullets, water cannons, and teargas at unarmed students - has drawn international criticism for the government, including from the United States and United Nations.

The government has ordered police to patrol school and college campuses to head off further trouble.

Sayed Nasirullah, an assistant commissioner with the Dhaka metropolitan police, said at least 20 students had been arrested on suspicion they spread "rumours and propaganda" on social media. Social activist and photographer Shahidul Alam, who had posted comments that a student wing of Hasina's ruling party was trying to attack the protesters, was held on similar charges.

The government has said it had to impose control because rival politicians got involved in the protests.

"There are forces within and outside the country waiting for any popular issue and then mould it to their advantage," Hasina's political adviser, Hossain Toufique Imam, told Reuters. "There's no doubt that there are enemies of the government who are trying to take every opportunity to destabilise it."

Hasina won the 2014 election for a second five-year term after Khaleda boycotted the polls in protest at the scrapping of the practice of installing a neutral caretaker government to oversee elections. Her party says it will decide in the next few weeks whether to continue with the boycott.

Analysts say the government's response to the emotionally charged student protests means Hasina may now face a much tougher fight to retain power than seemed likely a few months ago, if the BNP decides to take part - even though several leading BNP members are in jail on various charges.

The BNP, facing near-extinction with Khaleda's jailing, hopes it has found the lifeline it needed.

"The student protests showed that people have lost their faith in the Awami League," said Shahadat Hossain, BNP president for the southeastern district of Chittagong.

Anger at the ruling party may not fully translate into votes for the BNP, however.

"The way the ruling party handled the protests was not appropriate. This will definitely have some negative impact on the ruling party," said Nakibur Rahman, 23, a private university student in Dhaka who will be a first-time voter in December.

"All my family members are Awami League supporters. They are not switching sides but I have not taken any decision yet. But I am not going to vote for the BNP either."