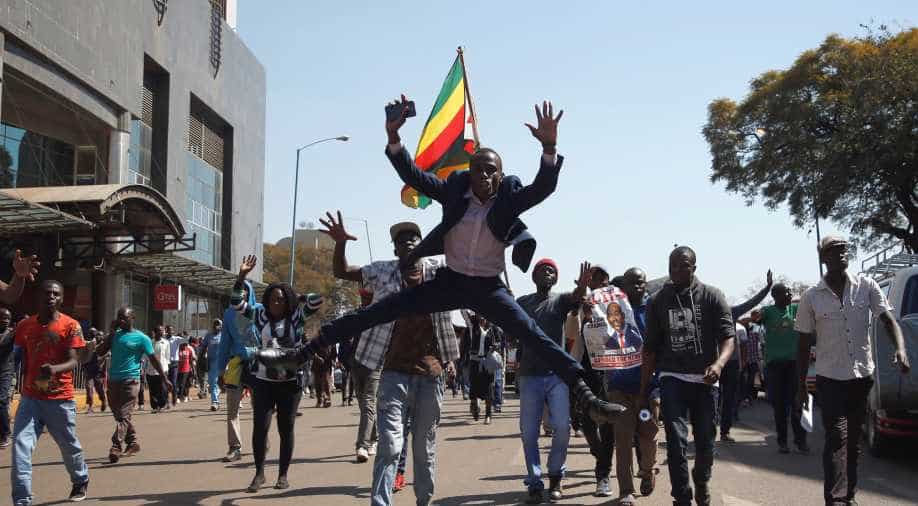 Supporters of the opposition Movement for Democratic Change party (MDC) of Nelson Chamisa, sing and dance as they march in the streets of Harare, Zimbabwe, August 1, 2018. Photograph:( Reuters )

Soldiers and police officials on Thursday cleared the streets of central Harare after the Zimbabwean authorities came under immense pressure to release the election results.

The government accused the Movement for Democratic Change (MDC) opposition party of inciting the unrest and vowed to enforce a security clampdown.

Gunfire crackled as troops, backed by armored vehicles and a military helicopter and some with their faces masked, cleared the streets of opposition protesters.

The unrest started soon after Nelson Chamisa, leader of the opposition Movement for Democratic Change (MDC), declared that he had won the popular vote.

After burning tyres in the streets, scores of his supporters attacked riot police near the Zimbabwe Election Commission (ZEC) headquarters. Officers responded with tear gas and water cannon.

President Emmerson Mnangagwa on Thursday said he wanted an independent investigation into the killings, and that he sought to settle differences "peacefully".

The MDC said the army had opened fire "for no apparent reason," killing unarmed civilians.