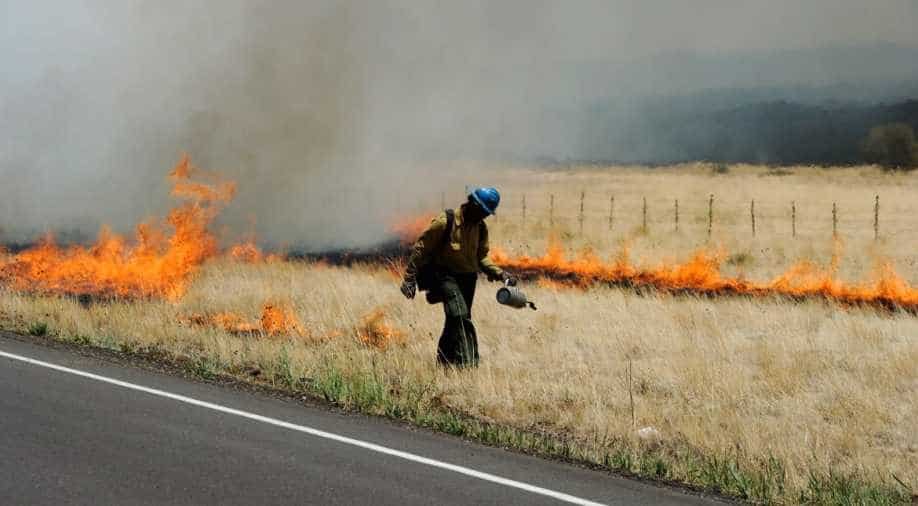 A Firefighter starts a backburn operations in an attempt to control the Wallow Fire along Highway 260 near Eagar, Ariz., on June 9, 2011 in Springerville, Arizona Photograph:( Getty )

Follow Us
A major brush fire burned on Wednesday in central Arizona, forcing over 250 residents to evacuate the town near the east and west side of Yarnell, where 19 firefighters had died in another blaze three years ago, authorities said.

Residents were forced from their homes in Yarnell by the "Tenderfoot Fire" that broke out about 3:15 p.m. local time, said Dwight D’Evelyn, spokesman for the Yavapai County Sheriff's Office.

The fire, which consumed  about 600 acres, threatened an undetermined number of structures in the area. It claimed three buildings, D’Evelyn said. No injuries have been reported.

“The fire has been very active and was moving quite rapidly at some points,” said Dolores Garcia, a spokeswoman for the US Bureau of Land Management. “This is a big deal,” she added.

About 100 firefighters battled the blaze from the ground and in the air, and crew members continued the effort throughout the night on Wednesday.

No immediate cause for the blaze has been identified. A shelter has been set up for evacuees at a local college nearby Prescott, Arizona, officials said.

Nineteen members of the elite Granite Mountain Hotshots had died in the 8,400-acre blaze that roared across drought-parched land northeast of Phoenix in June 2013.

The Hotshot crew, group of 20 firefighters trained in wildfire suppression tactics, died two days after the fire’s start, trapped by a wall of flames as they moved in a box canyon and were overcome by the fast-moving blaze. Hotshot Brendan McDonough was the lone survivor.  Scores of homes were claimed by what was the worst US wildfire in 80 years.