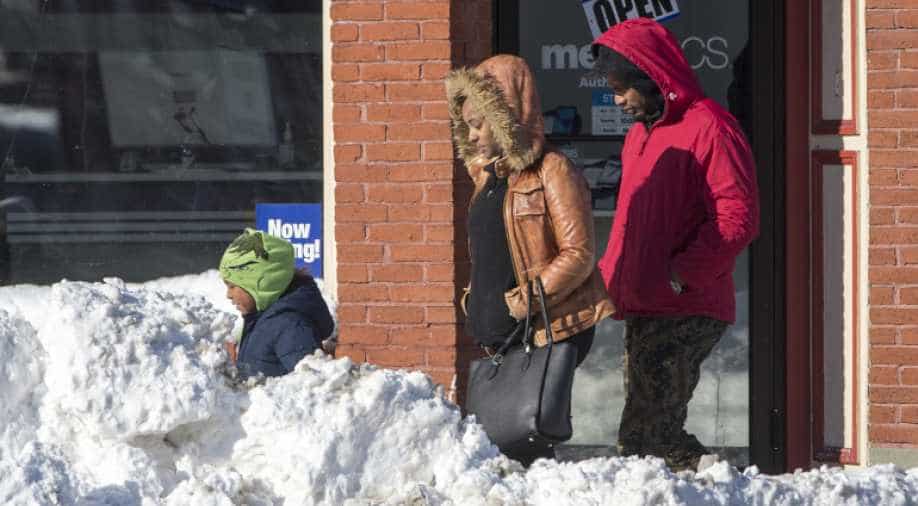 The eastern United States and Canada shivered under record-breaking low temperatures Saturday as Arctic blasts followed a deadly winter storm that left airports struggling to cope with the backlog of flights.

In Canada, temperatures approaching minus 50 degrees Celsius (minus 58 degrees Fahrenheit) were forecast in northern Ontario and Quebec.

Arctic air and dangerously cold wind chills could bring temperatures that feel as low as minus 45 Fahrenheit across much of the eastern two-thirds of the United States, with the risk of frostbite to exposed skin within 10 minutes, authorities warned.

The big chill follows a winter storm, dubbed a "bomb cyclone" by forecasters, which has been blamed for at least 19 deaths in the United States, from Texas to Wisconsin, US media reported.

The storm raked the East Coast with heavy snowfall, glacial temperatures and high winds, forcing the cancellation of thousands of flights and causing thousands more delays.

On Saturday, more than 2,250 flights within, into or out of the United States were delayed, with New York's John F Kennedy airport and the international airport in South Carolina's Charleston most affected.

Although most flights have resumed after the storm's passage, passengers on Air China 989 from Beijing were forced to wait seven hours to deplane at JFK, flight tracking site Flightradar24 tweeted.

Passengers complained of being stranded on the tarmac for hours and then facing lengthy delays in baggage claim that made traveling, particularly with babies or the elderly, a misery.

At least two flights bound for New York -- OS87 from Vienna and LH400 from Frankfurt -- had to turn back over Britain and Ireland due to "capacity limit at JFK," Flightradar24 said.

The Port Authority, which runs New York-area airports, acknowledged the problem, saying it was working to limit JFK flight arrivals until there were "gates available to handle the backlog."

Adding to the chaos, a China Southern Airlines and Kuwait Airways jet clipped each other's wings at JFK's Terminal 4 late Friday, causing damage to both aircraft but no injuries, officials said.

The US National Weather Service warned that below normal temperatures are likely to continue into early next week, forecasting freezing rain from Kansas to Tennessee, and said that ice could complicate road transport.

In the Midwest and Northeast, the highest temperatures were likely to be 20 to 30 degrees Fahrenheit below average, potentially breaking a number of daily records, forecasters warned.

"It will be a brutally cold weekend but some relief is in sight heading into early next week," the weather service said.

The temperature in New York, the US financial capital and home to 8.5 million, hovered Saturday around 14 Fahrenheit, with the Hudson River along the west side of Manhattan partially frozen.

In eastern Canada, which has suffered through extreme cold for two weeks, there were further flight delays and cancellations at the Montreal and Toronto airports, and some communities along the Quebec coast faced flooding.

"Frostbite can develop within minutes on exposed skin, especially with wind chill -- and keep emergency supplies in your vehicle," the Canadian weather service warned.