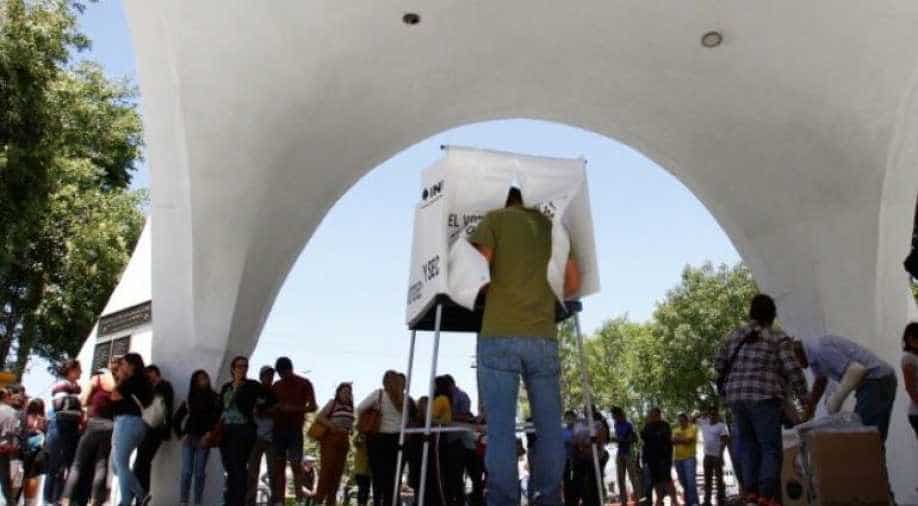 Hundreds of Mexicans living in California drove for hours on Sunday to vote south of the border for Andres Manuel Lopez Obrador as president, persuaded by his pledges to stand up to U.S President Donald Trump and end graft and violence at home.

Exit polls Sunday evening showed Lopez Obrador had won by a large margin, and his rivals both conceded shortly after polls closed.

Queuing under the hot sun at Tijuana polling booths, many Mexican voters who had crossed the border from California told Reuters that they trusted Lopez Obrador most to protect the roughly 12 million Mexicans living in the United States.

"This man is the only one who can make Trump end his persecution and racism against Mexicans," said Luis Evans, 58, who drove from Los Angeles to a voting booth about a mile from the border.

"If there's not a change in Mexico with Andres Manuel, then God help us."

Lopez Obrador has pledged to not let Mexico become a "pinata" battered by the United States and rejects Trump's plan for a border wall. He has also struck a nationalist tone on plans to boost the economy.

Trump has accused Mexico of sending criminals and rapists into the United States and is almost universally disliked in Mexico.

Josefina Serrano, 44, who rode eight hours from Sacramento on a bus organized for voters, said she voted for Lopez Obrador because she was tired of corruption and violence in Mexico, as well an anti-Mexican attitude in the United States.

"I came because I want things to change, and to shut up even President Trump," she said. "Living in the United States, you're called out for being Mexican - not just by Trump, but by everyone. They think we're all corrupt."

Tensions with the United States over migration, border security and talks to revise a free trade deal have loomed over the election, prompting all Mexican presidential candidates to promise to defend the country against Trump's threats.

A poll published in May by Seattle-based political research firm Latino Decisions showed that Lopez Obrador had a 23 percentage point lead over his closest rival among voting-age Mexican nationals living in the United States, especially those registered to vote by mail.

More than 181,000 people registered to vote from abroad, three times as many in the last election under a new policy allowing sign-ups at local consulates rather than in Mexico.

The National Electoral Institute said 98,854 of them mailed ballots by Saturday, more than twice the amount of Mexicans abroad that voted in the last election.

Experts said such a number would not make a difference in a vote with a clear front-runner, but candidates in future elections might pay more attention to voters north of the border.

Lopez Obrador launched his campaign in Ciudad Juarez in tribute to its namesake Benito Juarez, a 19th-century Mexican president whose exiled government resisted a French colonialist intervention from the unruly city that borders El Paso, Texas.

His unconventional, and at times inconsistent, policy stances have sometimes led to comparisons with Trump and have rattled nerves in the business community.

Even many Lopez Obrador supporters say the 64-year-old may struggle to achieve his ambitious goals - including getting Trump to soften his tone.

"What they're saying is a lie, that if Lopez Obrador wins, he'll have a tough relationship with Trump," said Juan Carlos Ramirez, 29, a construction worker in San Diego.

"That dude doesn't give a damn, he'll keep being racist towards Mexicans no matter who wins the presidency."