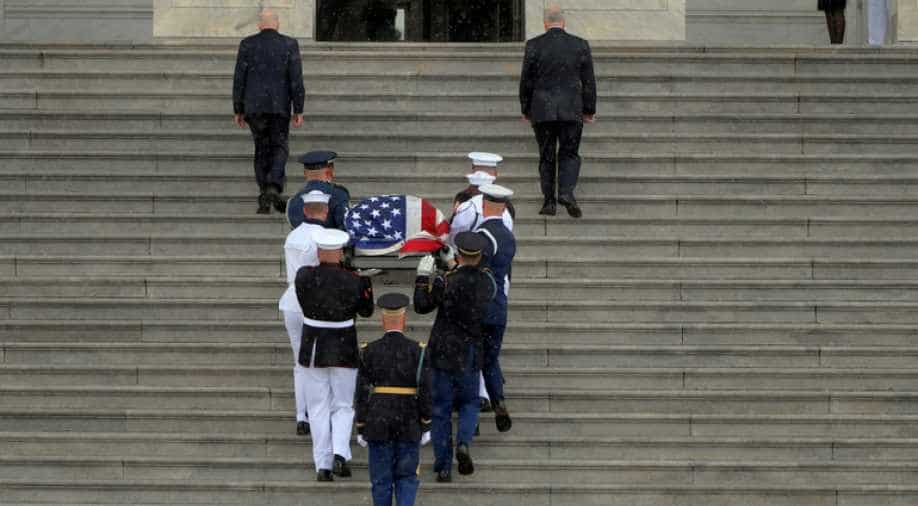 The casket of US Senator John McCain is carried up the steps of the US Capitol in Washington DC, US. Photograph:( Reuters )

Americans paid their final respects Friday to John McCain as the national icon lay in state in the US Capitol as part of a momentous sendoff for the war hero and statesman.

McCain's widow Cindy, his seven children and his 106-year-old mother Roberta McCain joined scores of members of Congress, state governors, diplomats and other dignitaries to bid the senator farewell.

President Donald Trump, who had feuded bitterly with McCain, was notably absent from the sombre ceremony in the Capitol Rotunda, an honour accorded to just 30 Americans throughout the nation's history.

The last visit to Washington by McCain -- who died last Saturday at age 81 after a yearlong battle with cancer -- is being spread out over two days with former presidents George W. Bush and Barack Obama to eulogize him during a memorial service Saturday at the city's National Cathedral.

Just before 11:00 am (1500 GMT) Friday, a military honour guard carried the flag-draped casket up the Capitol stairs, moving one deliberate step at a time, while inside the Rotunda dark-suited mourners stood at silent attention.

The silver-haired Roberta McCain -- whose presence was only confirmed on the eve of the ceremony -- appeared composed as she drew near her son's casket in a wheelchair, making the sign of the cross on her chest.

Seated beside her granddaughter Meghan McCain, she held the young woman's hand and appeared to comfort her as she wept.

Vice President Mike Pence -- who represented Trump at the ceremony -- began his tribute with an address to McCain's family, and particularly his mother.

"It is deeply humbling to stand before you today at the United States Capitol to commemorate the life and service of an American patriot, Senator John McCain," Pence said.

"The president asked me to be here, on behalf of a grateful nation, to pay a debt of honour and respect to a man who served our country throughout his life, in uniform and in public office."

It was an awkward message to deliver from a president who has studiously refrained from praising McCain, either during his illness or since his death.

Guests included former secretary of state Henry Kissinger, riding in a wheelchair at age 95 the actor Warren Beatty, a McCain friend and former senator Joe Lieberman, who in 2008 McCain came close to naming as his running mate.

The former aviator spent more than five years in a Vietnamese prison camp, returning home to launch a political career that saw him win the Republican presidential nomination in 2008.

He will be buried Sunday at the US Naval Academy in Annapolis, Maryland.

The funeral services were planned in advance by McCain, who made clear the US president was not welcome, in what was seen as a final rebuke to Trump.

Their feud took root during Trump's 2016 campaign when he questioned the notion McCain was a war hero -- because he had been captured after his Navy fighter jet was shot down over Hanoi in 1967.

The enmity was clear in the fracas this week over whether the White House would keep its flags at half-staff in McCain's honour -- which Trump finally agreed to do under heavy pressure from politicians, veterans groups and reportedly his own aides.

McCain meanwhile took a final swipe at Trump in a farewell message to the nation, delivered posthumously on Monday, warning not to "confuse our patriotism with tribal rivalries."

The president was unusually quiet in the White House Friday, not tweeting during the McCain ceremony, then departing for a political event in North Carolina.

Thousands of people queued outside for hours, many holding umbrellas to shield themselves from the sun, waiting for their chance to honour a patriot.

US Capitol staff confirmed that as of 2200 GMT Friday more than 10,000 people walked through the Rotunda to view McCain's casket.

"I wanted to pay my respects to John McCain," Mike Holy, a Vietnam war veteran sporting a Hillary Clinton button, told AFP as he waited in a line that snaked down the street.

Holy, 67, is a Democrat but felt compelled to vote for McCain in 2008, and he sides with the senator in not inviting Trump to the funeral remembrances.

"I think McCain was expressing a legitimate view, that he did not want somebody who is, for the most part, all fluff and no substance," he said.

McCain's remains were flown by military aircraft to Washington on Thursday from Arizona, which he had represented in Congress since his first election in 1982.