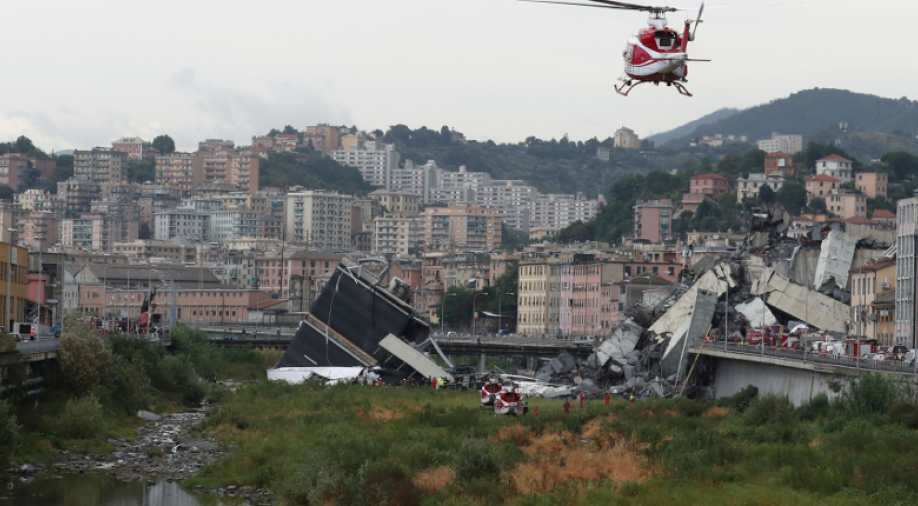 The collapsed Morandi Bridge in the Italian port city of Genoa Photograph:( Reuters )

The 50-metre section of the bridge crashed as heavy rains lashed the city coming down on a factory and buildings below as firefighters and sniffer dogs tried to pull bodies out of the rubble. Reports said four people were pulled out of the rubble.

"Now is the moment of relief, intervention, work, sweat and prayers. But tonight will have to be the time to find out who was responsible, the names and surnames of those who are guilty of unacceptable deaths," Italian deputy prime minister Matteo Salvini, said, adding,"so many schools, hospitals, railways, motorways need maintenance but often we are told that we cannot spend money because of European constraints, deficits and debt."

The 1.2 km-long bridge Morandi Bridge built on the A10 toll motorway in the late 1960s came down leading several train lines to be disrupted as the city came to a halt. Reports said restructuring work was carried out two years ago even as civil protection agency, Angelo Borrelli told Reuters that he was not aware that any maintenance work was being done on the bridge.

"People living in Genoa use this bridge twice a day, we can't live with infrastructures built in the 1950s and 1960s," Deputy Transport Minister Edoardo Rixi told a television channel.

Meanwhile, Prime Minister Giuseppe Conte said he was heading to Genoa and would remain there till Wednesday. Defence minister Elisabetta Trenta said the Army was ready to offer manpower and vehicles to help with the rescue operations.