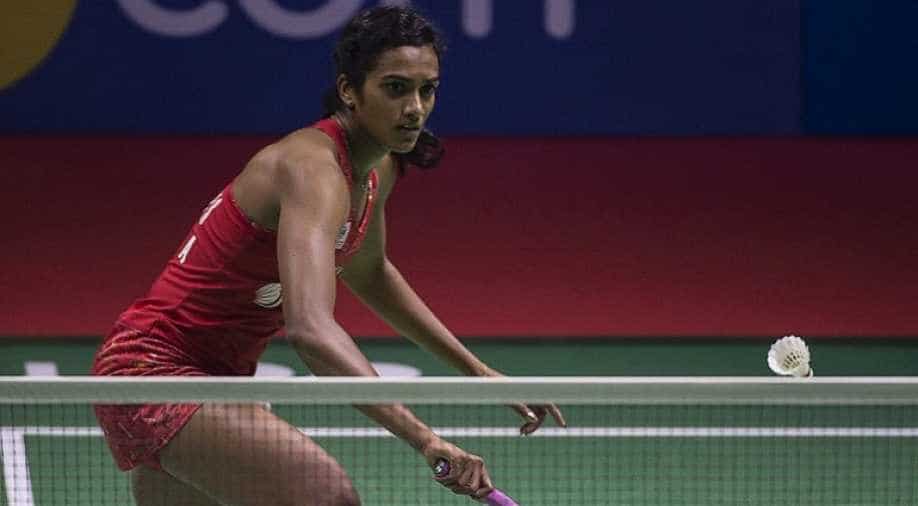 Star Indian shuttler P V Sindhu avenged her heart-breaking summit clash defeat against Nozomi Okuhara last year as she produced a dominant display to beat her Japanese rival in straight games to storm into the semifinals of the World Championships in Nanjing, China on Friday.

Sindhu defeated Okuhara 21-17 21-19 in a 58-minute quarterfinal match to be assured of a medal in the showpiece event. She faces World No. 2 and another Japanese Akane Yamaguchi in the semifinals tomorrow in her bid to reach her second straight final.

Yamaguchi had defeated Sindhu in the final of Dubai Superseries Finals last year.

This will be Sindhu's fourth medal from the World Championships as she has already won two bronze and a silver.

In both the games today, Okuhara led initially but Sindhu was able to come back to take the honours. The Rio Olympics silver medallist Indian dished out her wide array of tricks in her armoury -- the angled strokes, flat as well as steep smashes, drop shots, net placement and strokes to the deep court of her rival.

The win by Sindhu meant that the head-to-head record between the two is now levelled at 6-6.

After the World Championships final last year, they had played five times against each other, including today's match, and Sindhu has won three of them as against two by Okuhara.

Sindhu had lost to Okuhara in the final of the Thailand Open just prior to this tournament.

In the first game, Okuhara took an early 6-2 as she executed a brilliant cross-court half-smash, leaving Sindhu completely stranded.

Sindhu came back strongly as she got behind the shuttle early and not giving Okuhara time to react and sending shuttle from her front court to Okuhara's back. She clawed her way back to 5-7 and after Okuhara hit the net, the score was tied at 8-8.

Another error of judgment from Okuhara gave Sindhu the lead for the first time and then she extended it to 10-8 before going to the break 11-10.

The Indian maintained the lead at 14-12 with a superb down-the-line smash. Okuhara hit net twice and it was 17-15 for Sindhu. Then follwing a 35 shot rally which ended with a smash down the line, Sindhu was 19-15 up and reached game point with a drop shot after a 30-shot rally.

Okuhara came back to be at 17-20 but Sindhu pocketed the first game with a superb net placement.

Okuhara took an early 4-0 lead in the second game. Sindhu produced an exquisite stroke, a flat backhand onto Okuhara's deep corner, but she trailed 2-5. Sindhu then gave away some easy points to Okuhara as she was 3-9 behind.

Okuhara took an 11-8 lead at break but Sindhu came back to level it at 11-11 with three straight points as she mixed up her strokes well.
It was a tight affair as both the players gave nothing away. The score was level at 16-16 but from then onwards Sindhu stepped up the gas to grab the second game and win the match.

Sindhu is now the only Indian left in the fray.

Meanwhile, Saina Nehwal's impressive run came to a disappointing end at the World Championships as she suffered a straight-game loss to two-time champion Carolina Marin.