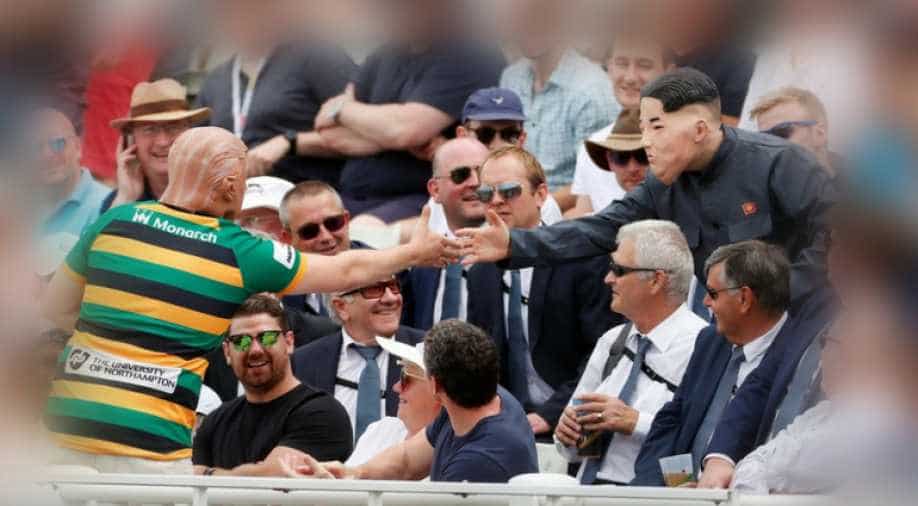 Definitely not, but the masqueraders Kim Jong Un and Donald Trump have added the entertainment in the third day of India vs England Test the match.

The fans and spectators were pleasantly surprised when fake Kim Jong Un was spotted with a dummy nuclear missile in his hand surrounded by a number of fake bodyguards.

After some time, Kim shook hands with US President Donald Trump and the crowd cheered for both the political leaders.

Apart from Ashwin's classic spell, the spectators got something else to enjoy. People also enjoyed it watching it on TV as the on-field cameras captured the 'political show.'

Even the commentators took a jibe at the incident, they said, "Out towards Kim Jong Un at deep point" to raise the fun quotient of the game. Here is a compilation of funny Twitter reactions on the incident.

Didn't realise @realDonaldTrump was a @SaintsRugby fan. Negotiations with Kim Jong Un (much like @englandcricket's batting) appear to have taken a predictable turn for the worse at Edgbaston. pic.twitter.com/YIiRhZ8zHi

Bloody love this. Man dressed as Kim Jong Un, holding a nuke, turns up to the test match with a dozen bodyguards. #INDvENG https://t.co/5KmeVmmHOM

Haha no?? Guy dressed up like Kim Jong un and came with a rocket.Usual fancy dress stuff

"Out towards Kim Jong Un at deep point"... possibly the finest piece of cricket commentary of all time ? @Aggerscricket @bbctms #ENGvIND

So far in the match, England collapsed to 86 for six in their second innings, a lead of just 99 runs, at lunch on the third day of the first Test against India at Edgbaston on Friday.