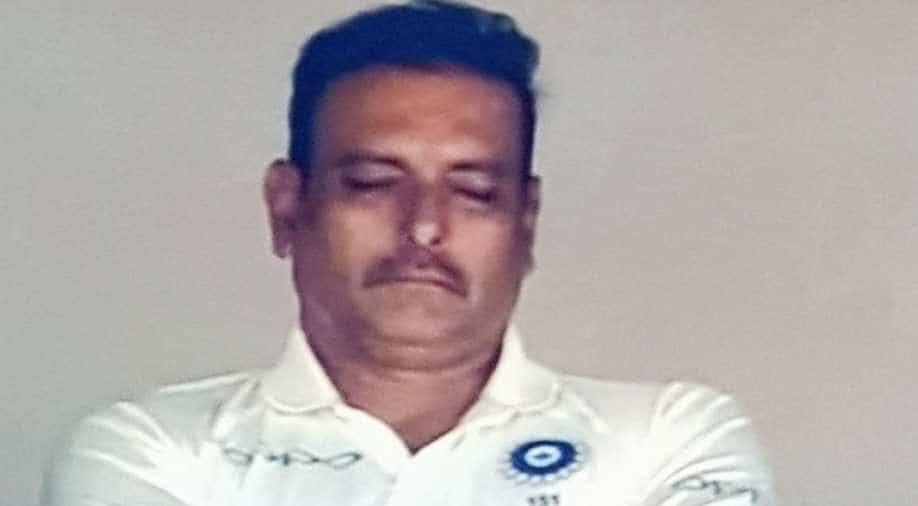 Indian Cricket team started their highly-anticipated battle against England in the longest format of the game in Birmingham on Wednesday.

The Virat Kohli-led side struggled to get wickets initially but displayed an applaudable spell of bowling and fielding, especially after tea break, to dismiss six English batsmen.

Before tea, the game was boring as England opener Keaton Jennings and skipper Joe Root (c) were easily taking singles and doubles to keep their scorecard ticking.

They were neither hitting big shots nor the Indian seamers were able to take wickets.

And that is, perhaps, the reason why coach Ravi Shastri fell asleep even as the players battled it out on the field.

Shastri dozed off after Lunch on Day 1 at Edgbaston and the worst part he was caught on camera napping in the dressing room.

He immediately became the butt of jokes on social media and was even trolled by veteran spinner Harbhajan Singh during commentary.

Bhajji was quick to poke some fun at the former India all-rounder. "Ravi Shastri having a nap there. Wake up, Ravi!" said Harbhajan as other commentators around him burst into a laugh.

Team India batting coach Sanjay Bangar, who was seated next to Shastri in the pavilion, was wearing an earpiece and listening to the commentary. He soon got this request from Harbhajan: "Sanjay, can you convey my message to Ravi?"

Bangar also burst into a hearty laugh, and so did Ravi as he woke up eventually and heard from his fellow coach what Bhajji had to say.

Twitter, too, had a good time poking fun at Shastri.

Ravi Shastri was spotted having a quick nap in the dressing room during the post lunch session. I hope Arnab Goswami doesn’t get to know about this. #ENGvIND #Cricket pic.twitter.com/pZNwIWe6QH

Ravi shastri is having a nap ??

Wonder why fans want Ravi Shastri to wake up. It doesn't matter. He isn't a 'coach' who will watch the match keenly and think of strategies. He's just a Kohli 'Cheerleader' and 'Yes-Man'. We all know that it's Kohli who decides everything. #ENGvIND pic.twitter.com/yMunN3QDgJ

England captain Joe Root won the Toss and chose to bat in the first Test of the five-match series against India at Edgbaston.