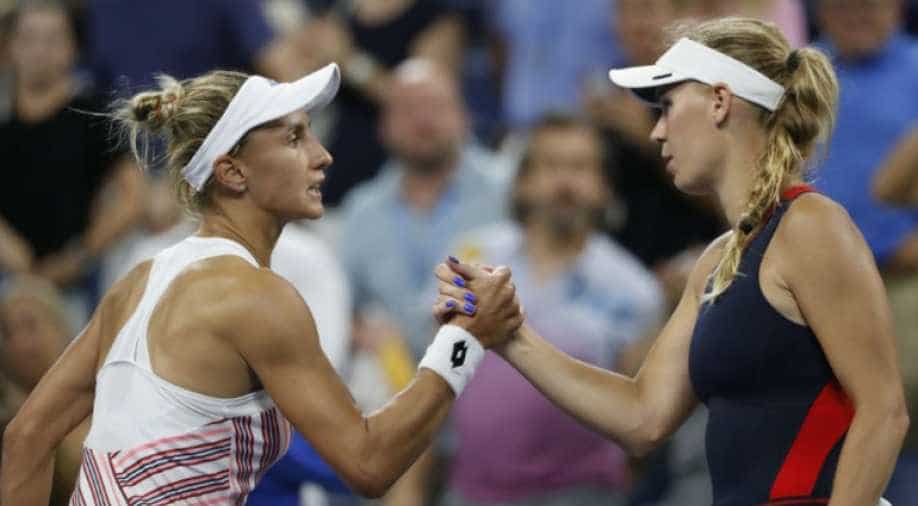 Second seed Caroline Wozniacki was dumped out of the US&nbspOpen after a shock 6-4, 6-2 loss to Ukraine's Lesia Tsurenko on Thursday as Dane's second round woes continued at Flushing Meadows.

The defeat marked the second consecutive year that Wozniacki, twice a US&nbspOpen finalist and this year's Australian Open champion, has failed to advance past this stage.

The second round has been a sore point for Wozniacki after her storming start to the season with the former world number one winning just once since Eastbourne in June, falling in the second round at Wimbledon and events in Montreal and Cincinnati.

"I felt like I'd been practicing really well, playing really well for the week leading up to the tournament," Wozniacki told reporters. "Obviously it wasn't an ideal preparation.

"I usually play more matches and just kind of to get into the rhythm. But I felt like I did everything right under the circumstances.

"She (Tsurenko) played really well, and I was trying to find everything that I could today, but it just wasn't going that way."

Wozniacki looked all business to start with, breaking Tsurenko at the first opportunity to jump 2-0 ahead, but the Dane could only hold serve once more during a scrappy opening set that was highlighted by five breaks.

Tsurenko, who called a medical timeout in the opening set to have work done on her right forearm, continued to receive massages during the second but had no issues finishing off Wozniacki in style, sweeping through the last four games.

"I started off pretty well... but she was playing smarter than me," Wozniacki admitted. "She played the game that I was supposed to be playing."

Tsurenko, who had her best ever result at a Grand Slam by reaching the last 16 at Flushing Meadows in 2016, will next take on Czech Katerina Siniakova, a 6-3, 6-7(3), 7-6(4) winner over Australian Ajla Tomljanovic.

"I actually practiced with her (Siniakova) right before the beginning of the tournament," Tsurenko said. "I've never played match against her.

"It will be a different game, for sure, than we had today."