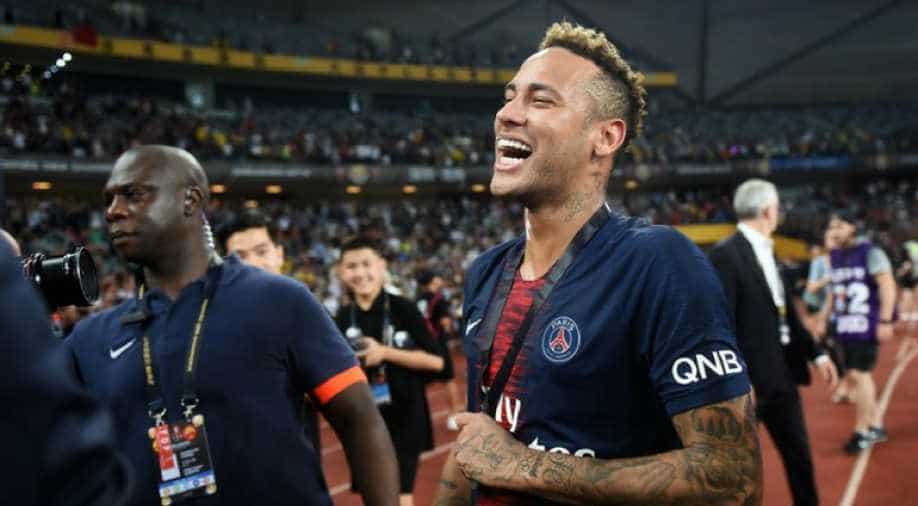 Brazilian superstar Neymar made his first club appearance since February as Paris Saint-Germain thrashed Monaco 4-0 in the French Champions Trophy in China on Saturday.

Angel Di Maria's double fired PSG to their first silverware under new coach Thomas Tuchel as Neymar, long sidelined by a foot injury, came on as a late substitute.

It was a comprehensive win for the reigning French champions in the season's curtain-raiser, even without Kylian Mbappe and Edinson Cavani who are yet to return after the World Cup.

PSG start their Ligue 1 title defence on Sunday, August 12, with a home match against Caen.

"I'm very happy, because we won our first final. It's great, winning 4-0 is incredible," said the 44-year-old Tuchel.

"I really like the fact that we played as a team. It was a very young team and the conditions were very hard, but we played with a lot of intensity."

Former Borussia Dortmund boss Tuchel was drenched in champagne by his players during his post-match press conference, like Didier Deschamps was after France's World Cup triumph last month.

Captain Thiago Silva said he hopes there is plenty more to come from his new coach, as big-spending PSG look to finally make a mark in the Champions League.

"It's good, he's brought in a lot of positive things, responsibility, but always trying to be happy," said Brazil centre-back Silva.

"I think that everyone deserved this result, especially the staff who have arrived, brought a lot of positive things and changed a lot.

"I hope it's just the beginning."

PSG, with their names in Chinese characters on the back of their shirts, were the aggressors and they took the lead via Di Maria's sumptuous strike.

The Argentina winger swept the ball over the wall and into the top right corner from 25 metres, evading Diego Benaglio's despairing dive.

As Tuchel watched while sitting on an ice box in the technical area, Nkunku made it 2-0 on 40 minutes with a close-range finish from Stanley Nsoki's inviting cross.

The 18-year-old Weah put the win beyond doubt in the 67th minute when he stroked home Nsoki's pull-back to score his first PSG goal, before Nkunku rattled the crossbar from close range shortly afterwards.

Italian goalkeeping great Gianluigi Buffon was rarely troubled on his competitive debut, with Stevan Jovetic an isolated figure up front for Monaco in the absence of captain Radamel Falcao and several other key players.

There were loud cheers from the 41,000-strong Shenzhen crowd when Neymar was introduced on 76 minutes but the world's most expensive player, last seen in Brazil's World Cup quarter-final loss to Belgium, couldn't add his name to the scoresheet.

Di Maria, deservedly, had the last word when Adrien Rabiot's long run set him up for an easy finish which he slotted past the beleaguered Benaglio in the third added minute.