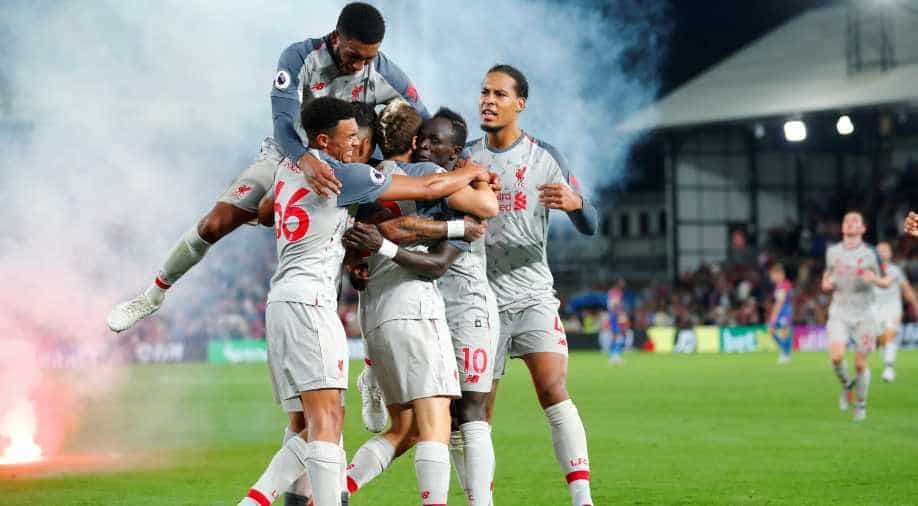 Liverpool's James Milner's converted a penalty on the stroke of halftime and Sadio Mane added a late second goal to secure a hard-fought 2-0 win at Crystal Palace in the Premier League on Monday.

It was an accomplished performance from Juergen Klopp's side who, with Virgil Van Dijk in commanding form at centre-half, looked solid at the back as well as a threat going forward.

Although they had to wait for Mane's fine solo effort to wrap up the points in stoppage time,Liverpool will be delighted that after a 4-0 opening day win over West Ham United they made it six points and two clean sheets from their opening two games.

While many will feel that Liverpool's early form has confirmed pre-season predictions that they will be the main challengers to champions Manchester City for the title this season, Klopp said he had no interest in such talk.

"It's very early. I couldn't care less really. We are not in a race with other Premier League teams each weekend. I was not 100 percent sure tonight in the first half that we would score," said the German.

"You have to play it as it is and be a real challenger, play ugly, do all that type of stuff. Our target is to be a difficult opponent. It is too soon to say anything after two match days. You can discuss whatever you want - just do it without us."

Palace's attacking threat was evident from early on and winger Andros Townsend sent a warning when he rattled the bar with a thundering effort from distance after cutting on to his left foot.

But the game turned as the visitors were awarded a penalty when Mamadou Sakho was ruled to have tripped Mohammed Salah.

Palace felt Salah made a lot of the challenge but, despite the protests, Milner kept his cool to fire past Wayne Hennessey and send the Merseysiders into the break with the advantage.

Palace's task was made harder 15 minutes from time when defender Aaron Wan-Bissaka was sent off for bringing down Salah in a goalscoring position.

Mane made it 2-0 in stoppage time with great strength and skill as he broke from the halfway line, after collecting a Salah through ball, and rounded Hennessey before slotting home.

"I take some comfort and pride in the team’s performance, but it won’t change my disappointment and anger," he said.