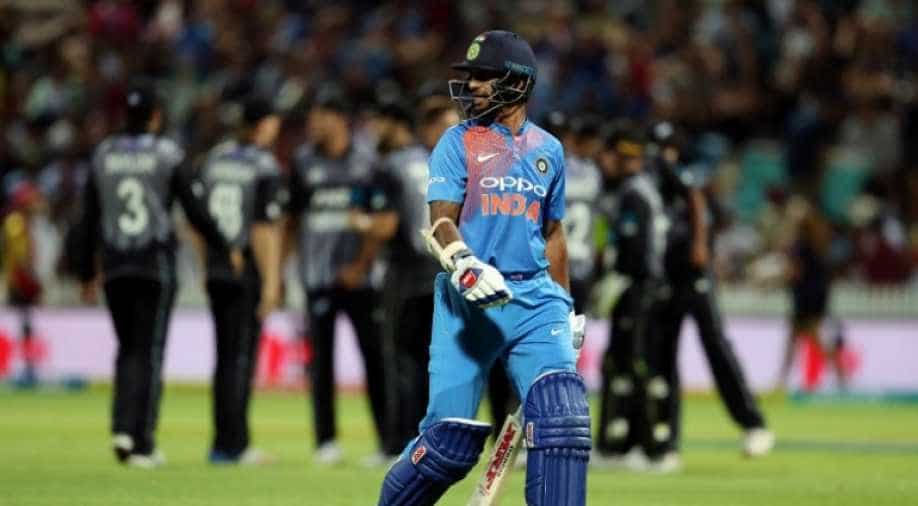 India's Shikhar Dhawan (C) walks off after being dismissed during the 3rd T20 against New Zealand. Photograph: AFP

A good spell with the ball for Tickner and Mitchell and India's required rate has gone up to 12.0. 72 needed off 36 balls, and Rohit Sharma has been caught behind for 38. India 141/4.#NZvIND LIVE ➡️ https://t.co/Prav9ucvl2 pic.twitter.com/YUmxySJ1mC

Dhoni out after scoring 2 runs.

Daryl Mitchell to Rohit, catch out by wicketkeeper Seifert.

Pant departs after terrific innings. He scored 28 off 12 balls.

Santner to Shankar, catch out by de Grandhomme.

Rishabh Pant comes to the crease.

New Zealand get an early breakthrough!

Mitchell Santner to Dhawan, catch out by Daryl Mitchell.

Mitchell takes a good catch at the deep mid-wicket.

Indian openers, Rohit Sharma and Dhawan, come at the crease.

New Zealand post a mammoth total of 212/4 for #TeamIndia to chase.

Will India chase this down or will the Kiwis defend their total? #NZvIND pic.twitter.com/s4ShooR4NU

Colin Munro shrugged off a string of low scores to plunder a rapid 72 as New Zealand posted 212 for four in Sunday's series-deciding final Twenty20 against India in Hamilton.

The New Zealand opener had averaged less than 20 in the previous four one-day internationals and two Twenty20s of the series.

But with the Twenty20s locked at one-all he found his touch with five fours and fives sixes in his 72 off 40 deliveries.

With Tim Seifert cracking 43 off 25, the pair put on 80 for the first wicket.

Colin de Grandhomme chimed in with 30 off 16 to ensure New Zealand passed the 200 mark.

Khaleel will bowl the last over.

Yadav to Colin Munro, catch out by Hardik Pandya.

Munro departs after scoring 76 off 40.

In the previous over, Khaleel Ahmed dropped a catch, Vijay Shankar was sloppy at the boundary and Kuldeep Yadav missed another catch.

Now the team can relax for the moment.

Kuldeep Yadav gets a breakthrough as he takes Tim Seifert's wicket.

On-field umpires referred to third umpire and the final signal is out.

Khaleel Ahmed bowls from the other end.

And for India, pacer Bhuvneshwar Kumar opens the bowling attack.

But India captain Rohit Sharma, who won the toss, said they had put the loss behind them and would defy the convention of batting first in a decider.

"We did not have a good result the last time we played here," he said.

"When it's a big game like a decider you always want to put runs on the board but the combination we play with allows us to chase because we bat very deep."

India go into this match with the series locked at 1-1, after earlier whipping New Zealand 4-1 in the one-day internationals.

New Zealand captain Kane Williamson, chasing a morale-boosting series win, said his side would have preferred to bowl first as well.

"It is what it is. We would have had a bowl but it looks like a pretty good surface so it's important we do the job first up," captain Kane Williamson said.

Sharma, who has hit 102 sixes in T20 internationals, needs one more to equal the record of 103 jointly held by the West Indies' Chris Gayle and New Zealand's Martin Guptill.

Captain @ImRo45 calls it right at the toss and elects to bowl first in the series decider #NZvIND pic.twitter.com/oknkxbex7J

We're back at the Seddon Park for the series decider #NZvIND pic.twitter.com/CJORsbIUa3

Indian captain Rohit Sharma won the toss and opted to bowl in the series-deciding third T20 International against New Zealand on Sunday.

India made one change with Kuldeep Yadav coming in for Yuzvendra Chahal.