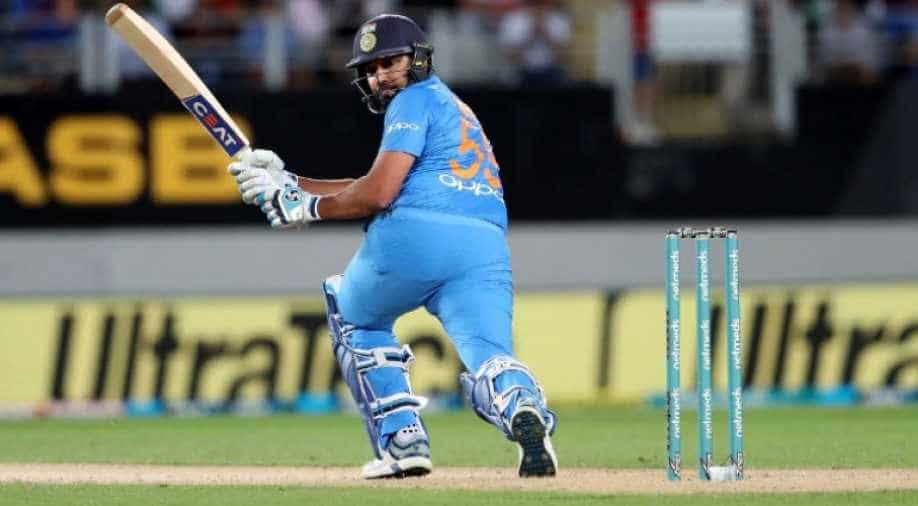 India defeated New Zealand by seven wickets in the second Twenty20 international at Auckland's Eden park on Friday to level the series at 1-1.

New Zealand set India a modest total of 159 and the tourists overhauled it in 18.5 overs, finishing at 162 for three as captain Rohit Sharma top-scored on 50.

Openers Rohit Sharma and Shikhar Dhawan have given India a terrific start while chasing 159 to win the 2nd T20I.

The parsimonious Krunal (3/28 in 4 overs) dismissed Colin Munro (12) and skipper Kane Williamson (20) to peg the Black Caps back.

In between, Krunal also got the controversial wicket of Daryl Mitchell (1), who fell pray to an umpiring howler, when 'Hotspot' showed a clear inside edge onto the pads.

However, Colin de Grandhomme, who has played for KKR in the IPL, then counter-attacked, scoring a blistering 50 off 28 balls, adding 77 runs with Ross Taylor (42 off 36 balls) for the fifth wicket.

Once De Grandhomme was sent back to the dug-out by Hardik Pandya (1/36 in 4 overs) and Taylor was run-out, New Zealand's chances of a big total went up in smoke.

It was a much-improved performance by the Indian bowlers with Bhuvneshwar Kumar (1/29 in 4 overs) removing Tim Seifert (12) in the very third over with a fuller delivery, inducing an inside edge to Mahendra Singh Dhoni behind the stumps.

However, it was Krunal, who really applied the brakes after being brought inside the Powerplay overs.

The elder Pandya quickly found the ideal length, bowling his usual wicket to wicket deliveries with a flatter trajectory.

Both Munro and Williamson got skidders. While the left-handed opener Munro hit one straight to the cover, Williamson was caught plumb in-front.

However, it was the dismissal of Mitchell that once again raised the 'Spirit of Cricket' debate even though it was a clear case of an umpiring howler by TV umpire Shaun Haig.

Krunal angled one into Mitchell, who got an inside edge onto the pads. The on-field umpire adjudged him leg before and he promptly asked for DRS.

As the giant screen showed that a faint edge could be detected by Hotspot, to everyone's dismay, TV umpire Shaun Haig pressed the red button to signal out.

After that, it was left to India captain Rohit Sharma to call the player back but he didn't do so.

At 50 for 4, it was De Grandhomme, who took charge as he attacked Yuzvendra Chahal (0/37 in 4 overs), hitting him for a couple of sixes.

When he was just about threatening to take the game away, De Grandhomme smacked one straight to covers in skipper Rohit's hands.

India bowled 35 dot balls, which could well be decisive in the final context of the match.
Young Khaleel Ahmed (2/27) also polished off two wickets in the end and he and Bhuvneshwar bowled 18 dot balls between them

Innings Break#TeamIndia restrict New Zealand to a total of 158/8 in 20 overs.

Hardik Pandya to Grandhomme, catch out by Rohit Sharma.

After playing a responsible innings, Grandhomme departs after scoring his maiden T20I fifty off just 27 balls.

After the early shocks, Colin de Grandhomme has settled the hosts by hitting some big hits in Chahal's over.

Once the DRS messed it up there was no solution other than asking the batsman to leave. The 3rd umpire has preferred snicko over hot spot. We haven't heard the last of this.

I can understand if the 3rd umpire says the two resolution methods are in conflict and so I will go with the on-field decision. But he doesn't say that. https://t.co/cJ8l5wnrcl

.@krunalpandya24 strikes again! The arm ball skids on, Williamson looks to pull through square leg, goes under the bat and he's in front.

It's clean this time.

Pandya to Williamson, out. It's LBW.

Krunal Pandya gets another, but that was controversial.

Daryl Mitchell has been given out, he goes for a review.

It seemed that there was an inside edge than the impact was made on the pads.

Mitchell and Williamson are sure that there is an inside edge but there is no spike on snicko and that's why Mitchell has been given out.

Williamson objects here and Rohit and Dhoni talk to the on-field umpires.

However, after the confusion, Daryl Mitchell departs at 1.

Krunal to Munro, catch out by Rohit Sharma standing at the cover.

Hardik Pandya and Krunal Pandya are bowling from both the ends.

Bhuvi to Seifert, catch out by Indian wicket-keeper MS Dhoni.

Bhuvi gives India a big relief when an outside edge goes directly into MSD's gloves.

Kane Williamson comes at the crease.

Williamson said earlier that everything clicked for the hosts in the first match in Wellington and they wanted to maintain momentum.

It's now the turn of the men at Eden Park! New Zealand win the toss and bat first in the second T20I. Both teams are unchanged.

Another pacer Khaleel Ahmed bowls from the other end.

New Zealand openers Colin Munro and Tim Seifert are at the crease and for India pacer Bhuvneshwar Kumar launch the bowling attack.

Welcome to the Eden Park for our 2nd T20I against New Zealand #NZvIND pic.twitter.com/wH4iE8UcVn

New Zealand win the toss and elect to bat first in the 2nd T20I. pic.twitter.com/kME8d034VG

Both India and New Zealand are unchanged for the match.

"Usually a good batting surface here. It's always a great opportunity to play against India," said Williamson after winning the toss.

Indian cricket team will leave no stone unturned to make a strong comeback as they suffered their biggest loss in T20I in terms of runs in series opener.

Rohit Sharma led-team lost the game by 80 runs after New Zealand had put up a mammoth total of 219 runs.

"I know we lost the last game, but chasing has been our strength. We have spoken about what we need to do with bat and ball. Hopefully we can get a win today," said Indian captain Rohit.