As it happened | 5th ODI: Australia neat India by 35 runs 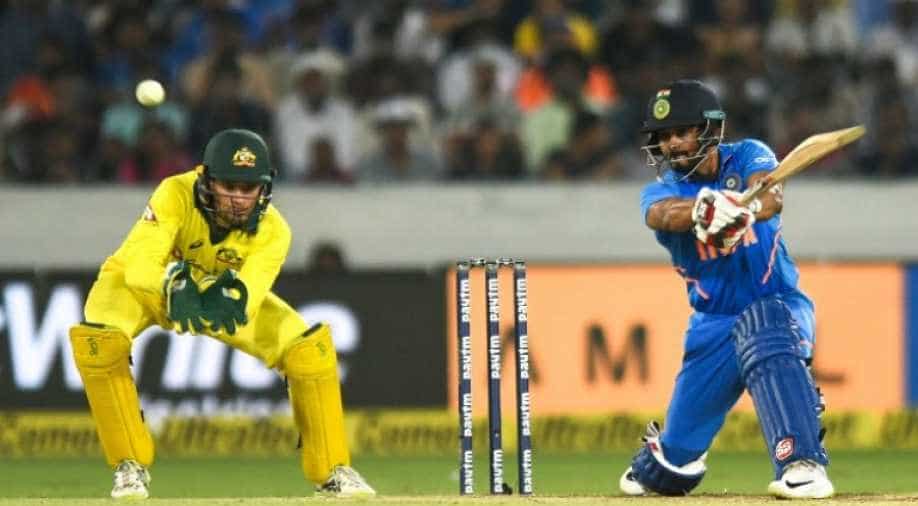 India won the first two games while Australia demolished the hosts in the third and fourth ODIs.

Australia will be on cloud nine as the side have managed to defeat India and win series on their soil, something which India did earlier when touring Australia.

Both the sides will now be preparing for the IPL, followed by the ICC cricket world Cup

That's all for today. Good night!

India were bowled out for 237 runs and with this win the Australia have won the fifth ODI and the series 3-2.

Despite a brilliant comeback by Kedar Jadhav and Bhuvneshwar Kumar, India failed to clinch the series.

Just when the things turned in India's favour, both the set batsmen Kedar Jadhav and Bhuvneshwar Kumar have been dismissed.

Australia again are in command and India again in trouble.

Kedar Jadhav and Bhuvneshwar Kumar are playing a hell of an inning as the two have build a partnership of 70 runs, so far, to keep India alive in the game.

The two played some phenomenal quick shots to reduce the run rate and target, which India at a point were very far from.

India are in trouble as they have lost their set batsman Rohit Sharma 56 and Ravindra Jadeja.

Australia are just four wickets away from winning the series.

25 overs have bee bowled and India's score stands at 122 runs for the loss of four wickets.

India's vice captain Rohit Sharma went on to slam a crucial half century while wickets keep tumbling at the other end.

Sharma, who opened the innings, is showing no hurry to score. He took 74 balls to reach his 50-digit mark.

After Dhawan and Kohli's departure, Rishabh Pant also failed to share the target with Rohit and departed after making 16 runs.

Australia have got their big man Virat Kohli, as India lost its second wicket. It was cross-seamer on a shortish length and Kohli went hard on the cut. Only to get a faint feather through to Carey who took it with ease.

Kohli had build up a partnership of 50 runs with opener Rohit Sharma to keep India on track. However, thing might change for the side as Rohit alone cannot make over 200 runs.

11 overs have been bowled and India's score stands at 57 for the loss of one wicket.

After Shikhar Dhawan's departure, Rohit Sharma and Virat Kohli shared the responsibility and are going strong.

India have lost their first wicket in the form of Shikhar Dhawan. Teh Southpaw, who had slammed a brilliant century in the 4th ODI, was dismissed for just 12 runs.

Dhawan went for the drive on the up. Only managed a thin feather through to Carey and the Australians immediately knew that they had got their man.

Australia have posted a target of 273 runs for the India in the fifth and final ODI at the Feroz Shah Kotla, New Delhi

The team could have gone past 300 but were restricted well at a crucial time by the Indian bowlers.

The five-game series is tied for ow with both sides winning two games each.

Only four more overs are left for the Australian innings to end. The estimated score will be around 260-270.

Meanwhile for India, Bhuvneshwar Kumar, Ravindra Jadeja and Mohammed Shami have bagged a brace each.

Australia lost their fifth wicket as India have started dominating the game.

Ashton Turner, who turned the tabled for the visitors in 4th ODI, was dismissed while trying to hit a big shot. Turned was caught out on the boundary line for just 20 runs.

After Khawaja and Maxwell, Peter Handscomb, who scored a half-century, was sent back to the pavilion by Mohammed Shami for 52.

39 overs have been bowled and Australia's score stands at 199.

It seems tables have turned for India as the Australian side lost two quick wickets - first of Usman Khawaja and second of run-machine Glenn Maxwell.

While Khawaja departed after htting his second ODI hundred, Maxwell was dismissed for just one run.

Coincidentally, both the players were dismissed while trying to hit a shot and the catch was taken by Indian skipper Virat Kohli.

Usman Khawaja scored another century to put Australia In command in the fifth and final ODI on Wednesday.

However, the Southpaw was soon dismissed by Bhuvneshwar Kumar for 100 only.

25 overs have been bowled and Usman Khawaja have kept Australia in command. playing at 75, khawaja is inching forward towards another century supported by Peter Handscomb at the other end.

Usman Khawaja have scored another brilliant half-century to put Australia in a dominating position.

India drew the first blood in form of Aaron Finch.

Ravindra Jadeja angles in from round the wicket, pitches on off-stump, draws Finch forward into the defence, and rips past his outside edge to uproot the off-stump.

Finch, along with Khawaja had established a partnership of 76 runs.

Australian openers have given their side a steady start, something which the team lacked in earlier games.

While Khawaja is inching closer to his half century, Finch is supporting at the other end.

The two are playing an inning filled with patience, however, making sure the scorecard keeps ticking.

Rotating strike was one of the complain the Australian management had with the team but it seems they have left it behind.

Five overs bowled and Australian openers have managed to settle themselves on crease.

The score stands at 30 for the loss of no wicket.

Australia have begin their fight with Openers Aaron Finch and Usman Khawaja on crease.

The two will aim to give their side a decent start before any of them lose their wicket.

Australia have won the toss and decided to bat first in the fifth and final ODI today.

Speaking after the toss, skipper Aaron Finch said, " Looks like a dry wicket. Hopefully we can get a big score and defend it later. The wicket and the squares have been re-laid over the last few years, so we can't look into the numbers much."

"Not a lot of international cricket here over the last 10 years. It's important to keep the momentum, whenever you get the opportunities with the bat, take it, and take the team across the line. Shaun Marsh misses out for Stoinis, Lyon comes in for Behrendorff."

Meanwhile, Indian skipper Virat Kohli, said, " We have to first restrict them with the ball, and we are the one of the best chasing sides in the world and we have to show that today. In terms of team composition, we know which way we are going. Chahal misses out and Jadeja comes in as an all-rounder, and KL misses out to make way for Shami. An extra bowling option for us, and this, we feel is our most balanced side."

Good afternoon and welcome to the live updates of the 5th ODI between India and Australia.

The final of the five-game series decider will be held at Feroz Shah Kotla, New Delhi.

Both the teams have won two ODIs each and will lock horns for the final gam today to clinch the series.

For India, it will be the final 50-over format games before they head to England for the ICC World Cup 2019.