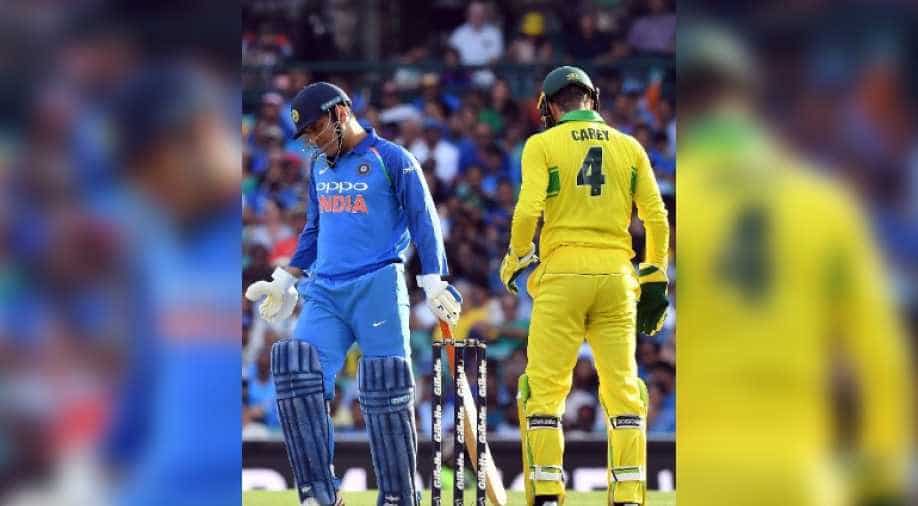 Australia defeated India by 34 runs in the first ODI of a three-match series at Sydney Cricket Ground on Saturday.

Richardson sends back Jadeja at a score of 8 runs.

Bhuvneshwar Kumar comes to the crease.

Rohit Sharma brings up his 22nd ODI century off 110 deliveries.

Next batsman Ravindra Jadeja comes to the crease.

Next batsman, Dinesh Karthik comes to the crease.

With a beautiful shot, Rohit Sharma completes his half-century.

It's his 38th ODI half-century.

India are at a score pf 95 after losing three quick wickets after 24 overs.

Rohit Sharma and MS Dhoni are playing a responsible innings to take India out of the danger zone.

Dhoni achieved this feat while playing at Sydney Cricket Ground against Australian on Saturday in the first ODI of a three-match series.

The wicket-keeper batsman becomes the fifth to reach the milestone for his country. 👏#AUSvIND LIVE 👇https://t.co/cJ0yJS6W8v pic.twitter.com/ezkRGRjCRI

In the same over, Ambati Rayudu too lost his wicket after Virat.

India at 4-3 after four overs.

Australia strikes early as they have taken two major wickets.

After Dhawan, it's skipper Virat Kohli, who scored just 3 runs.

India suffer an early shock while chasing a 288-run target.

Dhawan returns without scoring a single run as Jason Behrendorff strikes in the first over.

Australia scored 288 in the first one-day of a three-match series at Sydney Cricket Ground on Saturday. Electing to bat, Australia posted a challenging target after losing five wickets.

Half centuries from Khawaja, Shaun Marsh and Handscomb have guided Australia to a total of 288/5.

Will #TeamIndia chase this down?

Handscomb scored a crucial 73 runs but lost his wicket to Bhuvneshwar Kumar.

Kuldeep's final over was quite expensive, he gave away a total of 14 runs. That included two sixes.

Overall, Kuldeep Yadav gave 54 runs in his 10-over spell.

Kuldeep Yadav's last over of this game.

After losing two quick wickets, the run rate has been slowed down.

It's been 29 balls since the last boundary.

Soon after completing his fifty, Marsh loses his wicket.

Jadeja to Marsh, out, caught.

Marsh attempts to hit a boundary but the ball landed in the safe hands of fielder Shami.

Marcus Stoinis is the next batsman.

Khawaja tries to sweep the ball but lost his wicket after making no contact with bat.

Usman Khawaja refers for a LBW review but the third umpire goes with the on-field umpire and the decision is out.

It was umpire's call so Australia retain the review.

Next batsman is Peter Handscomb.

Australia are at 119 for a loss of two wickets after 26 overs.

He provided the required resistance and build up a very important partnership with Shaun Marsh.

Australia bring up their 100 after Khawaja's reverse shot.

Though it was a risky shot that went for a four, he looked in control.

Khawaja and Shaun Marsh are trying to push the run rate.

Here, a good partnership will be crucial for Australia.

Australia are at 72 after Finch and Carey's wicket.

Peter Siddle, Usman Khawaja and Adam Zampa caught up with some keen fans at Sydney’s @bupaaustralia Family Day ahead of Saturday’s @Gillette ODI against India at the @scg 🏏 pic.twitter.com/jZO6mUvqBy

Australia are now at a score of 41 runs for a loss of two wickets after 10 overs.

Australia 37 for the loss of one wicket after 9 overs.

Australia are at 27 for a loss of one wicket after 6 overs.

Fourth over started with a no ball and it includes two boundaries. A total of 10 runs from this over of Khaleel.

After three overs, Australia are at 10 for a loss of one wicket.

Pacers Bhuvneshwar Kumar and Khaleel Ahmed are attacking from both the ends.

He goes straight through Finch and removed the bails. Finch failed to defend it and as a result, walks back to dressing room.

After winning the toss, Australian skipper Aaron Finch said, "I think the middle overs we have to get it right, we have identified that. We need to brush up there and improve."

He added, "I think we need to keep wickets in the back end. My form wasn't great during the Test series, but I went back and got freshened up after playing BBL."

Indian captain Virat Kohli also said, "We would have batted first as well but a couple of players were inclined towards chasing."

Virat added, "It's a brilliant wicket to play on, with shorter boundary on one side. It's going to be an exciting chase as I am always inclined towards chasing."

"When two quality players (Hardik and Rahul) are not featuring, it upsets the balance of the side. There are few guys who've got a chance to prove themselves. Jadeja is back in the ODI side, let's see what he's got to offer," said Virat.

Australia won the toss and opted to bat first in the first one-day match of a three-match series.

Australia - following their first-ever 2-1 home Test series defeat to India - made a number of changes to their ODI team.

Alex Carey will open with skipper Aaron Finch, with veteran paceman Peter Siddle to play in his first ODI in more than eight years and Jason Behrendorff to make his ODI debut.

India went for two spinners with Ravi Jadeja returning to the side and Ambati Rayudu and Dinesh Karthik chosen in the middle order.

Hardik Pandya and Lokesh Rahul will be missing after they were sent home from the tour of Australia amid an investigation into comments made about women on a TV celebrity show.

In the last five ODIs at the SCG the average score is 327.

Australia have won three of their last 24 games since the end of January 2017 and are currently ranked sixth, while second-ranked India have only lost one of their last 11 ODIs.