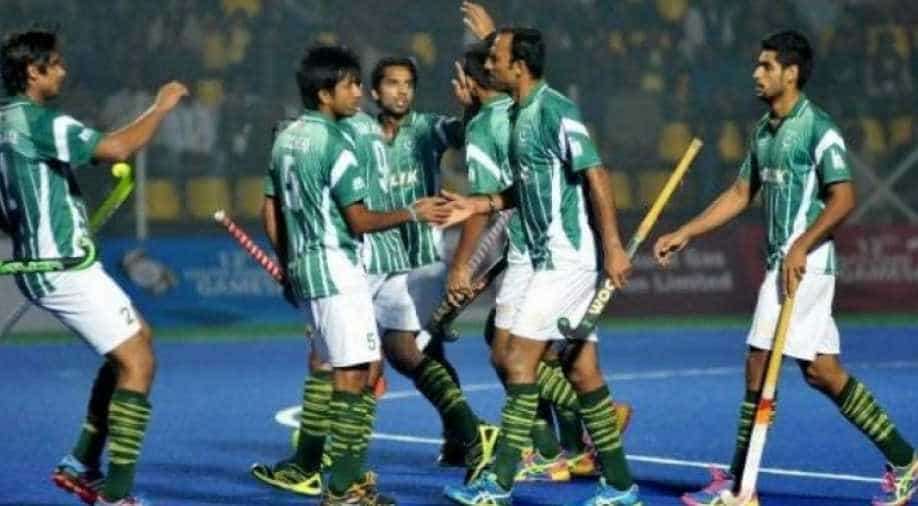 Belgium beat Pakistan 5-0 to face Germany in quarterfinals. Pakistan looked to score at least a goal but failed to put the final ball into the opposition's goalpost.

🏑 | LIVE | GAME-OVER! @BELRedLions are through to the quarters...and it is the end of the World Cup campaign for @PHFOfficial.

Belgium score another goal to increase their count to five against Pakistan's NIL.

They converted a Penalty Stroke for after the ball hit Rashid on body.

Ammad Butt get yellow card. Pakistan down to 10-men.

Penalty Corner by Belgium and they fail to convert it. A relif for Pakistan but their game is going poor with every quarter.

They need to play for pride now as it looks very diffuclt to equalise now. Two goals in this quarter will save them from an embarassing defeat.

Penalty Corner for Pakistan but fail to convert it as Ali drag flick is too wide.

Pakistan down to 4 goals to NIL as 2 Pakistan defenders try to intercept the ball but Sebastien Dockier puts the ball into the net.

🏑 | LIVE | @BELRedLions sneak one more in, this time through Sebastian Dockier!

A deflection from Paksitani defender gave Belgium third goal. The goal will go to Cedric Charlier as he is the last Belgium player to get a touch.

Penalty Corner for Pakistan but they fail to convert as they lost the ball while variation.

Goal! Belgium get the early advantage

Penalty Corner for Belgium as the defender push the ball out of play. They got another PC and Hen drag flicks the ball into the left channel of Imran Butt's goal

Pakistan have had the maximum ball possession so far, a long pass into the Belgium's circle and missed by Pakistani striker.

Meanwhile, some entertainment at the Fan Village

Pakistan pressing from the right but loses the ball. Free hit for Belgium

The first match on day 14 of the ongoing Hockey World Cup will be played between Belgium and Pakistan at Kalinga Stadium in Bhubaneswar.

In the head to head comparison, Belgium won all 3 matches against Pakistan since 2013. In the Hockey World Cup 2018, Belgium stood 2nd in the Pool C thanks to their two wins (South Africa and Canada) and a draw against the hosts India.

Pakistan, on the other hand, just managed to qualify for crossover thanks to their superior goal difference -5 compared to Malaysia's -9.

Pakistan, who played some brilliant defensive Hockey against Germany in their first league match, need to come up with new strategy to hold the Belgium to seal a quarterfinal berth.