As it happened | Hockey World Cup: Netherlands win after Australia fail to score in sudden death 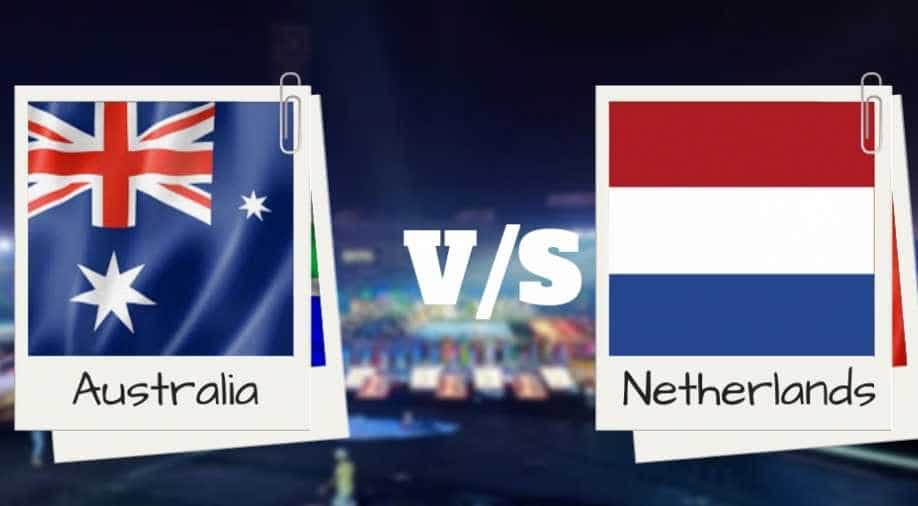 Netherlands are into the finals after beating Australia in Shootout and it is decided in sudden death. Now Netherlands will play for Gold against Belgium.

We're going to a shootout after Australia scored the equaliser with 27 seconds left. This is the first shootout of the tournament and everyone is excited.

Both the sides have played a brilliant game of hockey.

Australia scored the equaliser when only just 27 seconds were left for the game to be over.

Wow! What a game the two sides have played. Hats off!

Australia got a chance to equalise but they failed to. The Dutch keeper is standing like a wall.

Australia losing the ball possession quite frequently now and their chances of third world cup title in a row will be fading.

Penalty Corner for Netherlands but Austraila take video referrel and video umpire says there is no clear reason to change the on field decision.

Only a few minutes are left for the game to end. Australia are losing the game and they have to score to draw the game and take it to next level.

Netherlands are pressing hard to score another and snatch the game from the defending champions.

What a strategy adopted by the Australia side. Instead of hitting it straight, the defending champions scored in penalty corner variations.

The Kookaburras are just a goal behind the Netherlands.

A good pass in the Dutch circle but a skillful pass went unattended. A spin from Hertzberger earns him a free-hit at the top of the Australian circle.

The Australian side has not been goalless for so long in the tournament so far. they are attacking and played a decent game but it is Netherlands goalkeeper that is doing a brilliant job.

The winner of this game will face Belgium, who reached finals after routed England 6-0 earlier in the day.

Australia vs Netherlands - half time

Netherlands lead by two goals to NIL as the Australian defence looked brittle.

Australia tried to reduce the deficit but Netherlands' goal keeper stood as a wall. Exciting 2 quarters to go.

Slowly the game is slipping out of Australia's hands as the Dutch have managed to double their lead, that too very easily.

20' Goal to @oranjehockey. Van Ass gets past @FlynnO17 to the baseline & his cutback is deflected in off Tim Howard #HWC2018 #PrideOfTheKookas

Second quarter begins and the level of the game also rises.

Australia got a penalty corner which they failed to convert it, thanks to a beautiful defence by Netherlands goalkeeper. While defending the defending champions make a foul resulting in the Dutch getting a PC.

Thinking they would double its lead, Australian goalkeeper defended brilliantly.

The Netherlands draw the first blood to lead the game. Australia would be disappointed now and eager to score the equaliser.

Jonas cuts the ball from the baseline and Glenn Schuurman deflects the ball into the Australian net.

Netherlands had the chance to get an early lead, they got a penalty corner but failed to convert it.

And the battle for the final begins! All the best to both the teams.

🏑 | SEMI-FINALS | Here’s the Starting XI for @Kookaburras and @oranjehockey ahead of the second Semi-Finals of this World Cup!#HWC2018 #Odisha2018
🇦🇺 #AUSvNED 🇳🇱 pic.twitter.com/eWe16rBfHs

The second semi-final will see defending champions Australia take on the Netherlands in Bhubaneswar.

In the head to head comparison, Australia won 5 out of 11 matches played between the two sides while Netherlands emerged victorious on 4 while 2 ended in a draw.

A rare history awaits two-time defending champions Australia as they chase a record hat-trick of titles.

World no. 1 Australia is second only to four-time champions Pakistan, having won the world title thrice before, which includes back-to-back gold medals in the last two editions of the tournament in 2010 and 2014.

The Dutch, who have won the title thrice before -- the last time being in 1998 --, too would be desperate to break their 20-year-old jinx. Netherlands would be high on confidence especially after their hard-fought 2-1 win over home favourites India in the quarterfinals on Thursday.

The clash is expected to be an edge of the seat thriller as both the teams play a contrasting style of hockey.

🏑 | SEMI-FINALS | Young Tim Brand will be up against the seasoned @MinkvdWeerden. Who will prevail? 🤔#HWC2018 #Odisha2018
🇦🇺 #AUSvNED 🇳🇱 pic.twitter.com/k9Q7m92EYq