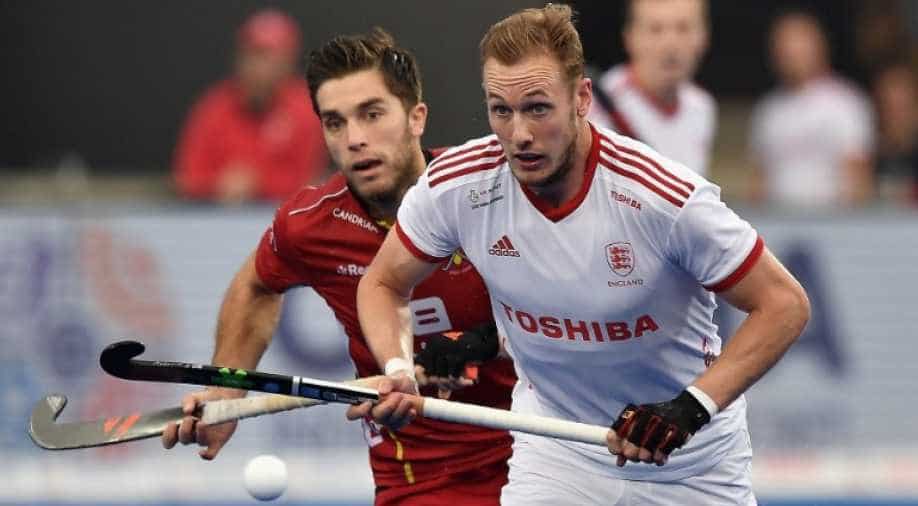 Players of England and Belgium vie for the ball during the first semi-final of the Hockey World Cup. Photograph: Twitter

Belgium have won the game by a margin of six goals. England failed to score even one. Though in the fourth quarter they tried to speed up but it wasn't of any help. Belgium's defence was superb. They played a complete game, which helped them outclass England and reach the finals of the Hockey World Cup 2018.

🏑 | LIVE | @BELRedLions are through to the FINAL of Odisha Hockey Men’s World Cup Bhubaneswar 2018! What a moment for them! The first WC Semi-Final, the first WC Final!

Penalty Corner for England. Belgium take Video referral and he says no reason to change on field decision and Belgium lose their referral.

England again fail to convert the PC as Vanasch make a save.

6th goal for Belgium. Goals are raining for the Red Lions Things are over for England. Only a miracle now can bring them back into the game.

0-6 by @SebDockier with a missile in the roof of the goal ! #HWC2018 #engbel #RoarTogether #RoarForGold

In the fourth quarter, England had the chance to reduce the deficit but a striker failed to intercept the ball at the top of the circle.

Belgium struck again to make it a difference of four goals against England. The English side have lost all the hopes of making a comeback in the game.

Though there is still one quarter left but it won't have any major difference.

Belgium inch closer to finals of the Hockey World cup.

Belgium scored the 3rd gold and it seem England World Cup 2018 dreams are nearly over.

Cedric Charlier scored the goal of the cross.

An example of strength and dedication towards his game and country. Respect.

🏑 | LIVE | As the game ends and enters history books, one of its most heartwarming stories will be of @simongougnard. Lost his father yesterday, stepped on to turf with eyes on the sky, putting nation above everything. Non sibi sed patriae.#HWC2018 #Odisha2018
🏴󠁧󠁢󠁥󠁮󠁧󠁿 #ENGvBEL 🇧🇪 pic.twitter.com/jiomqRLKkY

Half of the third quarter is over and England still haven't opened their account. Their game lacks speed and partnership. They are looking very loose, making it easier for Belgium to enter their circle.

Penalty corner for England at the start of third quarter. And wasted. The English sside got their first chance but they failed to convert it.

Score still the same with Belgium leading by two goals.

England vs Belgium- half time

Belgium indeed played a brilliant hockey to look a better side in first two quarter in the field. They scored two goals to further dominate the game in the second half.

On the other hand, England never had any chance and they need to buck up their game to keep their World Cup hopes alive.

🏑 | LIVE | The first half of the game belonged to the Belgians. @EnglandHockey will have to toil in the second!

England are not able to enter Belgium's circle as the Red Lions are defending brilliantly.

Belgium have won almost all duels and are in total control of the game. They however failed to extend their lead as Dockier fail to put the cross into the net.

Belgium scores of PC deflection as Simon Gougnard scored. By virtue of their goal Belgium are in a dominating position. this is exactly how they have played their games in the tournament so far.

England seem to be perplexed. They have to score before the half time to be alive in the game.

Second quarter begins and England have launched their attack. They would be looking to equalise as soon as possible and also take a lead before the half time.

Belgium, on the other hand, are not leaving a stone unturned to press into England's 'D'.

England on counter-attack now, trying to break into the Belgium's 'D'. Belgium have the ball in the back of English net.

England is pressing hard in Belgium's circle. Belgium has been strong with their defence so far in the tournament so it won't be cakewalk.

Here we go for a new epic battle. Against England for a place in the final! Come on LIONS! #HWC2018 #engbel #RoarTogether #RoarForGold pic.twitter.com/5uvXTFsMfo

Both the teams are prepared and on the ground to begin the encounter.

The first semifinal of the Men’s Hockey World Cup 2018 will see England lock horns with Belgium at Kalinga Stadium in Bhubaneswar.

In the head to head comparisons, England and Belgium won equal number of matches i.e. 3 out of 8 matches played since 2013 while 2 ended in a draw.

Olympic silver medallist Belgium would be looking to create history by making their maiden World Cup final appearance against the English side today.