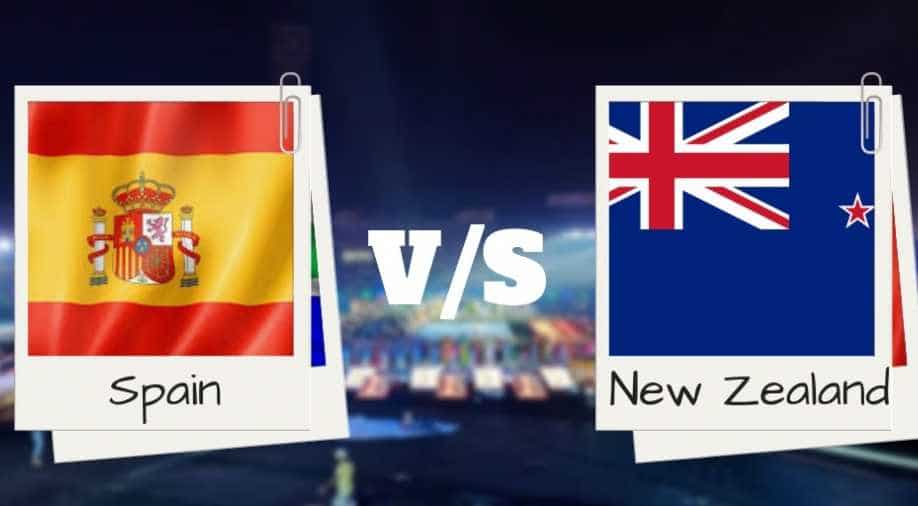 Full time! What a game it was. New Zealand made a strong comeback in the last quarter to hold Spain and end the game in a draw. They were attacking like a bull and displayed a game which they didn't capatilise in the first three quarters.

So, it is 2-2. And Spain would be very upset with it. They had the advantage of an early goal which was later doubled.

By virtue of this draw, Black Sticks hold the 2nd place in the Pool A.

Now, the onus will be on France to beat the mighty Argentina to make their place in cross-overs.

🏑 | LIVE | Both teams took turns scoring and they will be anxious to see how the next match goes. Regardless of that, what a game this was! @rfe_hockey @BlackSticks

Penalty Corner for New Zealand and converted. Finally, some action from Kiwis side. A cross from Arun Panchia and Jenness failed to the ball in the Spanish circle.

They have levelled the score. Kane Russell flicks the ball in the back of the goal and now ee have a tied game.

At last New Zealand score as Hayden Phillips finds the top of the net beating Cortes. Earlier, New Zealand were up the ante while trying to score their first goal but fail to find the goalpost.

New Zealand lost the ball possession and its Spain again. They are lacking basic skills, losing the ball in the Spain's half quite frequently now.

The black sticks have failed to score even a single goal. The game is in Spain's hand, an opportunity to dominate the opposition.

Legendary Indian athlete @anjubobbygeorg1 is the special guest at the Kalinga Stadium today during the #ESPvNZL encounter. She gives her best wishes to the Indian team and hopes to see them in the Final of the OHMWC Bhubaneswar 2018. #IndiaKaGame #HWC2018 #DilHockey #ESPvNZL pic.twitter.com/WaqgkXz3lR

Spain pressing hard in the New Zealand's circle and nearly scored the 3rd goal but a deflection from Goalkeeper's stick deflected the ball.

Spain score the second goal as the cut from the baseline is brilliantly deflected by Alvaro Iglesias.

🏑 | LIVE | @aiglesias19 doubled the lead for @rfe_hockey with a smart execution!

Spain fail to convert the Penalty Corner in the 25th minute of the game.

Arun panchia make a superb tackle as Quamada want to storm into the new Zealand's circle. Spain are dominating the possession, making the Black Sticks starve for the ball.

Spain maintaining the ball possession at the start of second quarter. New Zealand looks desperate to score the equaliser. but it won't be cake walk as Spain is arguably playing an intriguing game today.

🏑 | LIVE | We had some great moments and one goal in the first quarter!

So there's really some excitement in the first quarter. Spain has earned a lead over the Kiwis.

Black sticks are looking strong so far. Stephen Jenness had a good opportunity but his shot just went wide of the goal

What a save! brilliant.

From the 1st minute, New Zealand is pressing hard in the Spain's half.

With just a single win separating their previous results, this match surely promises to be a thrilling encounter.

📸 | Never a dull moment with our World Cup mascot Olly! 😊 Go get some selfies with him in the Fan Village!#HWC2018 #Odisha2018 pic.twitter.com/xqrW5v69eL

Here's is the playing XI of both the teams.

Just one request, please don't end the game in a draw. There has been more of draws then results.

The Day 9 of Men’s hockey world cup 2018 will see the start of 3rd round matches with Pool A encounters.

In today's first game, Spain will lock horns with New Zealand at Kalinga Stadium in Bhubaneswar.

In the head to head comparison for previous Hockey World Cups, Spain won 4 out of 7 matches played while New Zealand came victorious in three.

New Zealand defeated France 2-1 in the first game and lost 0-3 to Argentina in the second. They are placed 2nd in the points table with 3 points.

Spain, on the other hand, lost 3-4 to Argentina in their first match and drew 1-1 against France in their 2nd.

They are currently at 3rd place in the pool with only 1 point.