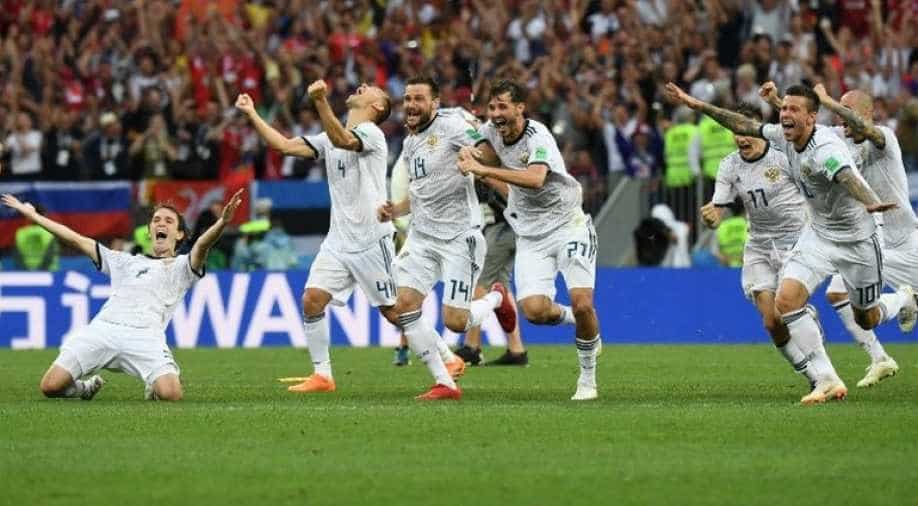 That's all for today.

Russia win the penalty shootout to send Spain back home. The hosts have won and reached the quarterfinals.

Russia have held Spain at bay for 120 minutes. And the game enters into a penalty shootout.

Spain substitution: Rodrigo on, Asensio off.

It's first time in this tournament that any game has gone into the extra-time. Just to inform, new rules allow the team to make a fourth substitution in extra-time

Match goes into extra time. There will be half-an-hour more of Spain vs Russia game. If still the score remains level, will go straight to a shootout.

90 minutes are over. Get extra four minutes. Scores still equal.

Isco floats one into the mixer. Two Russian defenders miss it. The ball falls to Busquets, who has a fresh-air shot from 10 yards.

Russia substitution: Granat on, Zhirkov off.

Dzyuba converts penalty to score equaliser. Russia are back in the game. The big striker sends De Gea the wrong way and plants a low shot into the other corner.

Russia are struggling to even reach near Spain's goal. Fernandes and Samedov combine down the right but all in vain for now.

Clearly an unfortunate one. A mild touch from Ignashevich foot while falling went directly into Russia's net and Ramos takes credit.

In the first 10 minutes, everything is going smoothly for Spain right now. They have shown some beautiful touches but Russia are deep and disciplined and have given no loose area for opponents to score.

Welcome to the WION.com live updates of Spain vs Russia

The suspicion is that this is where reality will catch up with Russia and the hosts will be evicted from the tournament.

Russia have played with tremendous energy so far and some of their players have shown real class – Aleksandr Golovin is suddenly on the wish list of clubs.

Spain have never had any luck against hosts. Spain have faced the hosts eight times in World Cups or European Championships and never won – losing even to South Korea.

'Look at Ishan, Suryakumar and Krunal': Mohammad Amir hits out at PCB selectors