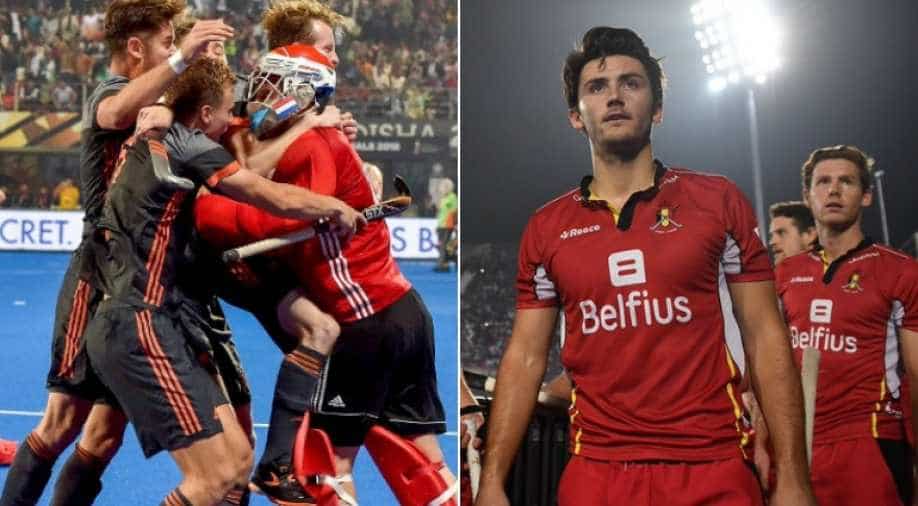 The moment came after Dutch Hertzberger failed to score.

The winner of the Osisha men's World Cup final will be decided in shootout. Both, Belgium and Netherlands failed to score till full time.

Belgium and Netherlands remain goalless as the match ends. Both the sides defended brilliantly and did not allow the opponent to score.

It is the first time in Hockey World Cup final the full time ended without any goal scored.

Netherlands win free hit at the top of baseline. Belgium also making some critical tackle in their circle

The fourth and final quarter is underway and Belgium with full court press now and win the ball at the centre line.

No body is playing loose but they haven't advanced their attack.

As promised the cricket legend is here.

Both the teams are back to mid-field play. Dedication is visible but its the strategy they lack to beat the opponent's defence and score.

Gougnard cuts back from the Dutch baseline but it went unattended.

38th min - BEL trying to put more pressure on the NED defence, but no real danger yet #HWC2018 #belned #RoarForGold

Q3 begins and an attacking start from both the teams but none of them able to find the net.

Another penalty corner for Netherlands before the half time and Belgium take video referral. Umpire says no clear reason to change on field decision.

And the Dutch again fail to score. It's half time now.

🏑 | LIVE | Half-Time! And we are yet to see a goal despite the continued pressure on the ball by both teams.#HWC2018 #Odisha2018
🇧🇪 #BELvNED 🇳🇱 pic.twitter.com/PoFaUBLcV5

Another chance for Netherlands to score but they fail to convert the PC. It seems the teams will reach half time goalless only.

Finally a chance: Van Doren wins the free hit at the edge of circle but loses the ball. Now the ball is in Belgium's court but they too lose the ball.

Belgium are holding the ball while Netherlands are pressing full court. The game has been a balanced one so far but they have to make swift entry into the circle to draw the first blood.

There should be at least two goals at half time.

Second quarter stated with both the teams aiming to score a goal before half time. The game has been quite intriguing so far with both the sides bot allowing other to score or enter each other's circle easily.

The first quarter ends with both the teams being goalless. No side is playing a loose game but eventually it will be goals that will decide the winner.

Netherland's Hertzberger with the shot misses the Belgium's post by 2 feet.

A goal in the first quarter would have been a game changing opportunity for the Dutch.

Meanwhile, take a look at the stands with fans cheering for their respective teams.

🏑 | LIVE | We are underway with the final! Take a look at the stands.

Thank you Odisha for such great hospitality and a kind gesture to hold the 2018 Hockey World Cup tournament.

The Dutch are having the ball possession and making every pass to enter the Belgium's circle. A change in strategy, they make a back pass to keep the possession.

Netherlands is pressing hard in the Belgium's circle and their goalkeeper make two brilliant saves.

Belgium on counter attack and nearly scored the goal.

The first quarter begins with Belgium and Netherlands fighting for gold at the Hockey World Cup 2018.

May the best team wins!!

Both the teams have announced their starting XI, as the clash is all set to begin in a few minutes.

🏑 | FINAL | Here’s the Starting XI for @BELRedLions and @oranjehockey ahead of the final. Who are you cheering? 😊#HWC2018 #Odisha2018
🇧🇪 #BELvNED 🇳🇱 pic.twitter.com/o3IkqVAVfM

Defending Champions Australia, who lost 4-3 to Netherlands in yesterday's nail-biting semi-final, today came third and won the bronze medal in the Hockey World Cup 2018, after defeating England 8-0 in a game to decide the 3rd and 4th position.

It was a one-sided game with Australia's Tom Craig announced as the player of the match for netting three goals.

Now, Belgium and Netherlands will fight for the gold and silver today. The game will begin at 7:00 pm.

🏑 | LIVE | Here’s the final scorecard for the game, where @Kookaburras saw off the @EnglandHockey challenge with comfort.

Hello and welcome to the live updates of Hockey World Cup final.

Belgium and Netherlands will lock horns in Men’s Hockey World Cup 2018 final at the Kalinga Stadium in Bhubaneswar, today.

Although, the Netherlands will enter the ground as the favourites, the final will surely offer more, espeically from the Belgium side.

“We are looking forward for the final match. We learn from every game and there would be better show from us on Sunday," said Netherlands captain Billy Bakker. He said his team will do their best to avoid conceding late goals.

"We need to make sure that we learn from these moments," added Billy.

Netherlands coach Max Caldas said both Belgium and the Netherlands play similar style of hockey and they will enjoy the final.

🏑 | FINAL | A lot will depend on @cedriccharlier and Seve Van Ass as the European giants battle for the Cup.#HWC2018 #Odisha2018
🇧🇪 #BELvNED 🇳🇱 pic.twitter.com/6zEHZlXLTg