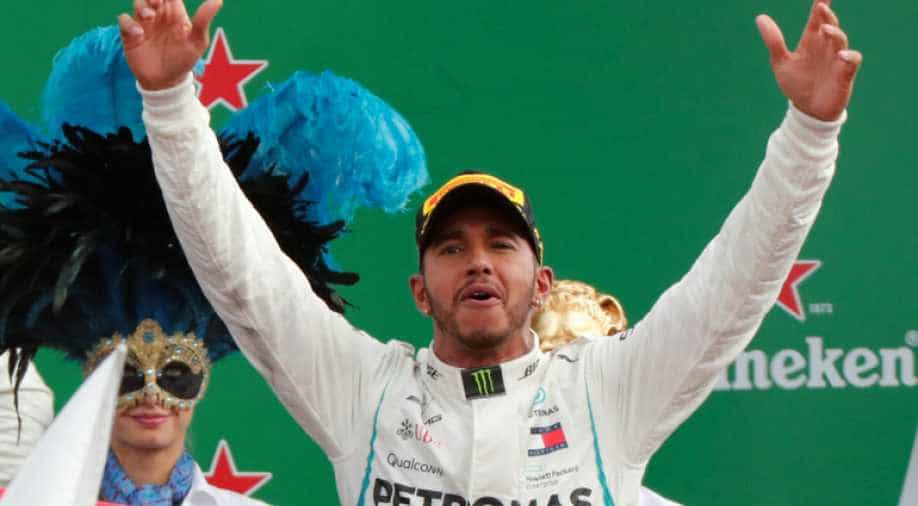 Mercedes' Lewis Hamilton celebrates on the podium after winning the race. Photograph:( Reuters )

Formula One world champion Lewis Hamilton equalled Michael Schumacher's record of five Italian Grand Prix wins on Sunday and left Ferrari feeling the pain once again in their own backyard.

The Briton and Sebastian Vettel, his closest title rival now 30 points behind, collided on the opening lap with the German Ferrari driver sent spinning down to 18th place before recovering to fourth.

Hamilton then twice overtook Kimi Raikkonen, who had started on pole, to dampen the spirits of Ferrari fans who had turned out in droves in the hope of celebrating a first home win in eight years.

The thrilling victory was a fifth in a row for Mercedes at Monza, the spiritual home of the sport's most glamorous and successful team, and one of Hamilton's most satisfying.

"Today was so difficult. Whilst the negativity is never great, that's what powered me along. I actually accept it," Hamilton told the crowd, who flooded the main straight with their flares and flags and booed him massively as he stepped onto the podium.

"I love being here in Italy...the track is incredible, and it's a such an honour to win here in front of such a great crowd."

Hamilton's sixth win of the season lifted him to 256 points, to his German rival's 226, with seven races left in what remains a fierce battle between the four times world champions.

Mercedes have 415 points to Ferrari's 390 in the constructors' standings.

Raikkonen had looked to be in with a chance of his first win in 108 races but the Finn, who seized back the lead after Hamilton passed him on lap four, was unable to hold off the Briton.

Hamilton passed him again eight laps from the end and never looked back.

"I think it (the car) was quick enough but unfortunately our rear tyres went," said Raikkonen, who was hardly in the mood to celebrate his 100th podium in Formula One.

"It was a losing battle from that point. We did our maximum," said the 2007 world champion. "For sure we tried but the rear tyres gave up before the race ended."

The winner was also helped considerably by teammate Valtteri Bottas who led after Hamilton pitted and managed to hold up Raikkonen long enough for the other Mercedes to close the gap.

"I was really trying to do everything I can to get to the podium. First, my mission was to hold off Kimi, and then I was challenging with Max," said Bottas.

Vettel, who made two stops including a first one to replace a damaged front wing, and Bottas both moved up a place at the finish after Red Bull's Max Verstappen was handed a five second penalty for pushing the Finn off track on lap 44.

Verstappen was fifth with Romain Grosjean sixth for Haas and Esteban Ocon seventh for Force India ahead of team mate Sergio Perez.