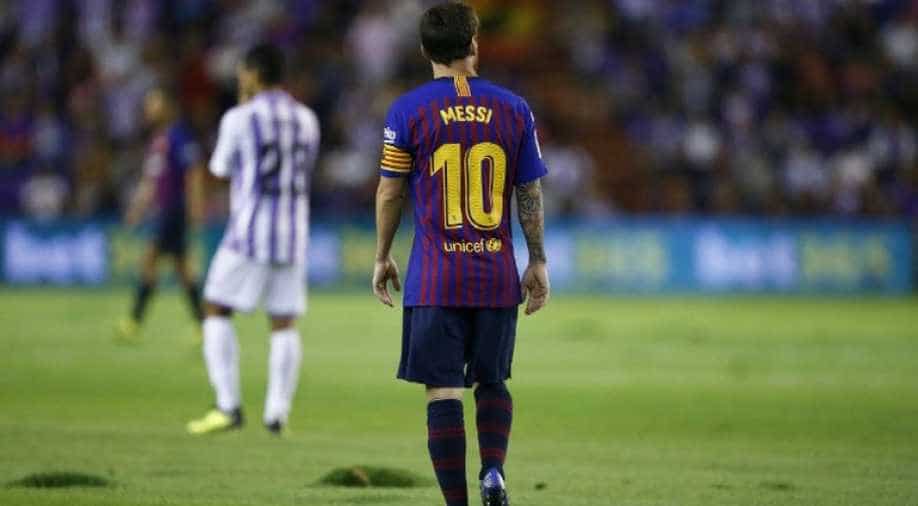 Lionel Messi leaves the pitch after the Spanish league football match between Real Valladolid and FC Barcelona at the Jose Zorrilla Stadium in Valladolid. Photograph:( AFP )

La Liga have opened an investigation into the pitch at Real Valladolid’s Jose Zorrilla stadium following their 1-0 defeat to Barcelona on Saturday.

The pitch, which began to tear up during the warm-up, was only laid on Tuesday and severely impacted the match as a spectacle.

Players from both sides struggled to control the ball and Barca were unable to implement their usual passing style, with the game descending into farce on occasion as players were required to replace entire clumps of turf that had been dislodged.

"Following the conclusion of the game between Valladolid and Barcelona, a disciplinary case will be opened in order to clarify who is responsible for the state of the pitch at the Jose Zorrilla stadium not meeting the minimum conditions demanded by the competition," La Liga said in a statement.

La Liga president Javier Tebas said on Twitter during the match that the pitch "did not meet the minimum criteria demanded for a competition like La Liga."

Valladolid coach Sergio Gonzalez said the club had done everything possible to get the pitch ready.

"We were the last team to get promoted and we’ve had issues getting the pitch ready on time,” he told a news conference.

Local media mocked the state of the pitch, referring to it as a "potato field", while Barcelona’s players were furious throughout and voiced their frustrations after the game.

"I hope those in charge get their house in order and fix this, because it was lamentable."

His view was echoed by team mate Sergio Busquets. "With the pitch like it was it was really hard to play," Busquets said.

"It’s lamentable that the best league in the world is played in these conditions. There were areas that seemed more like a beach.

"It's incredible that no one from La Liga felt they should come and check the grass. You can’t play on that."

Media reports said Barca would also file a formal complaint to the league.

The champions also complained about the length of the grass when they last visited Valladolid in 2014 after suffering a 1-0 defeat.