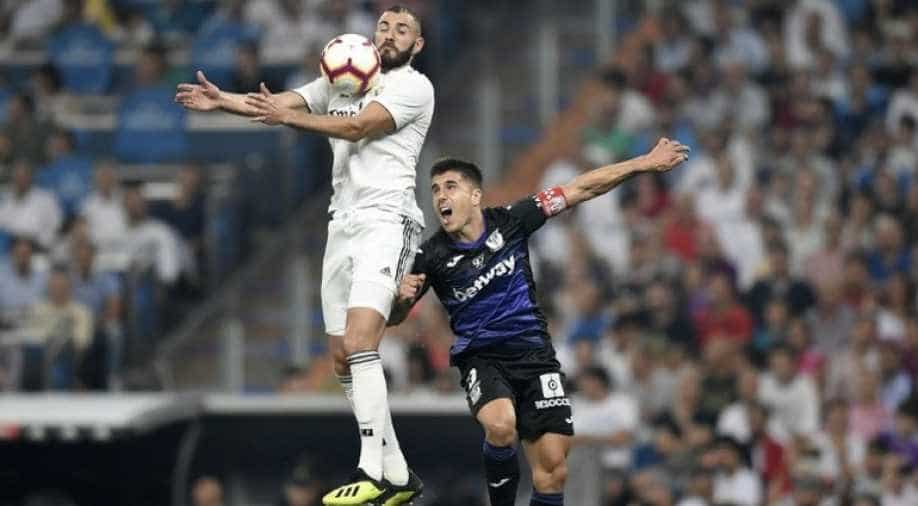 Karim Benzema scored twice and Gareth Bale notched another for Real Madrid in a 4-1 thrashing of Leganes on Saturday after Atletico Madrid crashed to defeat in La Liga.

Benzema grabbed a second-half double and might have got his hat-trick had Sergio Ramos passed on the penalty he scored after a foul on Marco Asensio.

Atletico lost more ground on their city neighbours as they sank to a 2-0 defeat at Celta Vigo which coach Diego Simeone described as "a major wake-up call".

At the Santiago Bernabeu, Bale broke the deadlock with a smart half-volley, which was briefly cancelled out by Leganes' Guido Carrillo, who converted his own spot-kick to ensure Thibaut Courtois' first Madrid contribution was to pick the ball out of his own net.

Together with Asensio, Real may be about to discover a new attacking trio of untouchables, even if Lopetegui rejected the idea afterwards.

"The word untouchable does not exist in football," Lopetegui said.

"The goals were down to the whole team." Real have also taken maximum points from their opening three fixtures in contrast to the same point last season when they were already five behind Barcelona.

Leganes' underwhelming start under new boss Mauricio Pellegrino continues. They are yet to post a victory.

Keylor Navas was named last season's best goalkeeper by UEFA on Thursday but was only deemed second choice here by Lopetegui, who handed Courtois his debut after joining from Chelsea earlier this month.

"He has wished me a lot of luck, we get on very well," Courtois said of Navas.

Luka Modric took the place of Isco, in a midfield three with Casemiro and Toni Kroos. Bale and Asensio supported Benzema up front.

Real's confident start saw Asensio skip in behind but his lifted finish floated just over, before Bale's cross was too quick for the straining head of Benzema at the back post.

The first goal came after Ramos' pass found Dani Carvajal as the furthest man forward and the full-back's clever header back towards the penalty spot wrong-footed everyone except Bale. The Welshman arched his right leg over the bouncing ball, his finish just enough to beat Ivan Cuellar.

Real looked in control but, against the run of play, Leganes earned a lifeline when Casemiro tripped Javier Eraso in the box. Carrillo sidefooted left as Courtois dived right.

Benzema was unlucky to restore the lead when his fired shot was denied only by the foot of Cuellar but the striker did not have to wait long. Three minutes into the second half he headed in Asensio's cross from the left after winning a tussle with Leganes' Jonathan Silva.

Referee Jaime Latre initially blew for a foul but, after consulting VAR, the replay showed Silva had been the aggressor and the goal stood. There was no doubt about Benzema's second. He exchanged a one-two with Modric on the edge of the area and, drifting right, dragged his shot left, back across goal and into the bottom corner.

He might have had his hat-trick had Ramos opted to delegate penalty duties after Asensio fell over a thoughtless challenge from Leganes captain Unai Bustinza. But Ramos took the spot-kick and made no mistake.

Atletico coach Simeone said he "assumed responsibility" as his side went down to goals from Celta's Maximilian Gomez and Spain forward Iago Aspas.

Atletico drew their opener against Valencia before making amends with a 1-0 home win over Rayo Vallecano but they have now dropped points for the second time this season.

"Celta played very well," conceded Simeone. "We didn't trouble them, they were sharp and obviously afterwards they knew how to defend their advantage.

"We lacked precision with the chances we had, that's why we failed to score.

"It's a major wake-up call, for me mainly because against Rayo we weren't good in the final 10 minutes... But I'm not worried, I'm calm."

Reigning champions Barcelona take on Huesca at the Camp Nou on Sunday.