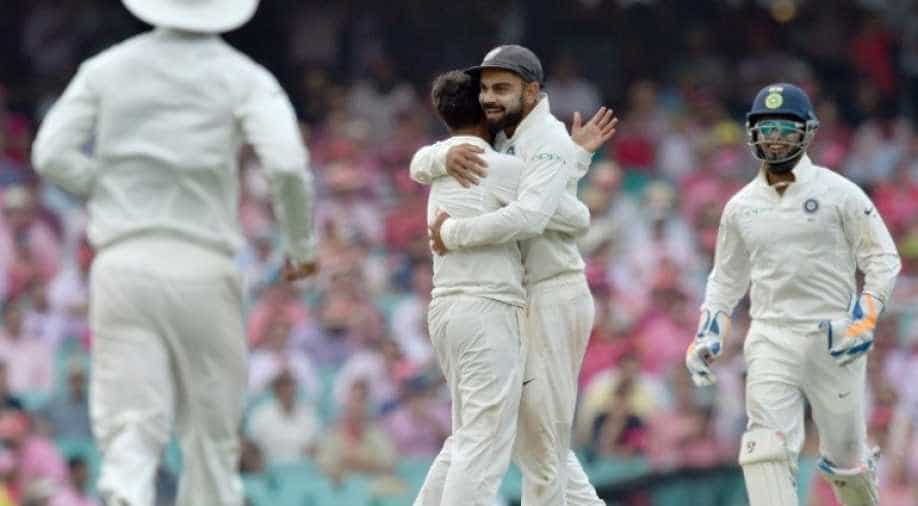 Australia were left struggling at 236 for a loss of six wickets in their first innings in reply to India's colossal score of 622-7 in Sydney Test on Saturday.

Bad light stopped the play and early stumps on the third day of the fourth Test.

Poor visibility forced the umpires to stop the proceedings at the Sydney Cricket Ground in the final session and eventually it was decided to end the day's play 16.3 overs ahead of schedule.

When the players walked off the field, Peter Handscomb and Pat Cummins were batting on 28 and 25, respectively, as Australia trailed India's first-innings total by 386 runs.

Play in the fourth test between Australia and India was suspended for bad light in the final session of the third day with storm clouds threatening rain.

It has started to drizzle at the SCG and play has been stopped due to bad light.

India need a draw at the Sydney Cricket Ground to win the four-match series.

Today's game has been stopped due to bad light.

Pat Cummins comes to the crease as skipper Tim Paine lost his wicket.

Kuldeep sends back Paine after the tea break.

Australia were struggling at 198 for five at tea on the third day of the fourth and final Test responding to India's mammoth first-innings total of 622 for seven declared.

At the break, Peter Handscomb and skipper Tim Paine were batting on 21 and 5 respectively, as Australia trailed by 424 runs.

Ravindra Jadeja strikes as soon as the game resumed after the lunch break.

He gets Harris' wicket.

Responding to India's mammoth first-innings total of 622 for seven declared, Australia were 122 for one at lunch on the third day of the fourth and final Test.

Marcus Harris and Marnus Labuschagne were batting on 77 and 18, respectively, as Australia trailed by 500 runs at the Sydney Cricket Ground.

One for the cause. #TeamIndia presented signed caps in support of the McGrath Foundation on Jane McGrath Day at the SCG pic.twitter.com/BlCCWzS7Oa

For the last 10 years, Australia have continued the tradition of hosting the Pink Test in the beginning of a new year to raise funds for the McGrath Foundation, which works towards breast cancer awareness and aid. McGrath's wife passed away in 2008 from breast cancer aged 42.

Showing his solidarity for the noble cause, India skipper Virat Kohli had added a dash of pink to his batting gear - gloves and pads.

"So touching to see the #indiancricketteam being not just amazing on field, but also off. Fantastic supporters," McGrath Foundation wrote on its Twitter handle.

The McGrath Foundation is seeking to raise as much funds as possible before stumps on day five of the fourth and final Test between India and Australia.

One of cricket's greatest fast bowlers, McGrath also received the baggy pink caps from Tim Paine and his Australian team on the Jane McGrath day at the Sydney Cricket Ground.

Marcus Harris at 69 and Marnus Labuschagne at 15 after 35 overs.

Cheteshwar Pujara ground out a masterful 193 and Rishabh Pant smashed a magnificent unbeaten 159 as Australia's hopes of winning the match and saving the series were washed away by a torrent of Indian runs on day two of the fourth test on Friday.

Virat Kohli declared on 622 for seven an hour before the close of play when Ravindra Jadeja was dismissed for 81 and Usman Khawaja (5) and Marcus Harris (19) ushered Australia to stumps on 24 without loss.