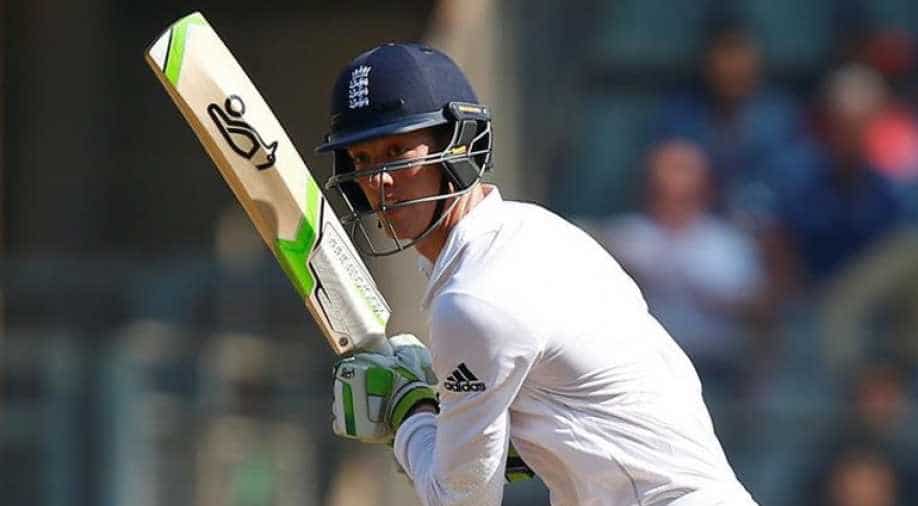 England's Keaton Jennings plays a shot during the fourth Test against India in Mumbai. Photograph:( Reuters )

South African-born batsman Keaton Jennings scored a stunning century on his debut as England made a solid start to their must-win fourth Test against India in Mumbai on Thursday.

The left-hander -- who switched allegiance to England to boost his international career prospects -- made 112 as the visitors ended the day on 288-5 at the Wankhede Stadium.

Jennings, 24, was almost caught on zero runs and took until the 12th ball to get off the mark, but when he did there was no stopping the tall opener.

He grew increasingly confident in the middle as the day progressed with an array of exemplary shot-making, including a trio of audacious reverse sweeps that went for fours.

It was one of those sweeps that brought up his ton mid-way through the afternoon session, with Jennings punching the air in delight as he celebrated a debut to remember.

Jennings, who was only called up to the squad after Haseeb Hameed was injured in the third Test, put on a partnership of 99 with fellow opener and captain Alastair Cook.

Cook was stumped on 46 by wicketkeeper Parthiv Patel after swinging at a Ravindra Jadeja delivery but Jennings held his nerve and plotted his way to 65 by lunch.

He outlasted Joe Root who could only make 21 before he was caught at slip by Indian captain Virat Kohli off a spinning Ravichandran Ashwin delivery.

Moeen Ali steadied the ship, helping guide Jennings to his ton and scoring a half century of his own before foolishly getting caught out.

Ashwin turns it on

He hopelessly scooped up an Ashwin delivery that landed comfortably in the hands of Karun Nair to put England at 230-3.

Jennings, who hit 13 fours during his 219-ball knock, walked soon afterwards when Cheteshwar Pujara caught a little flick off the bat for Ashwin's third wicket of the day.

Jennings, who was born in Johannesburg and captained the Proteas under-19s, became the latest South African-born English cricketer to score a ton on their international Test debut.

Andrew Strauss and Matt Prior both made centuries in their first outings while Jonathan Trott reached three figures in the second
innings of his Test debut.

Jennings, whose mother is English, moved to England in 2011 after leaving school, committing himself to four years there so he could become eligible to play for the national side.

He opted for England to further his career in a similar move to Kevin Pietersen in the early 2000s.

Players who were born abroad are eligible to play for England after spending four years in English county cricket, a policy that has attracted some controversy.

England trail 2-0 in the five-match series and anything less than a victory would see India seal the contest.

In-form off-spinner Ashwin grabbed his fourth wicket when Jonny Bairstow was caught on 14 as India restricted the tourists somewhat after their strong start.

Ben Stokes and Jos Buttler were at the crease on 25 and 18 respectively.