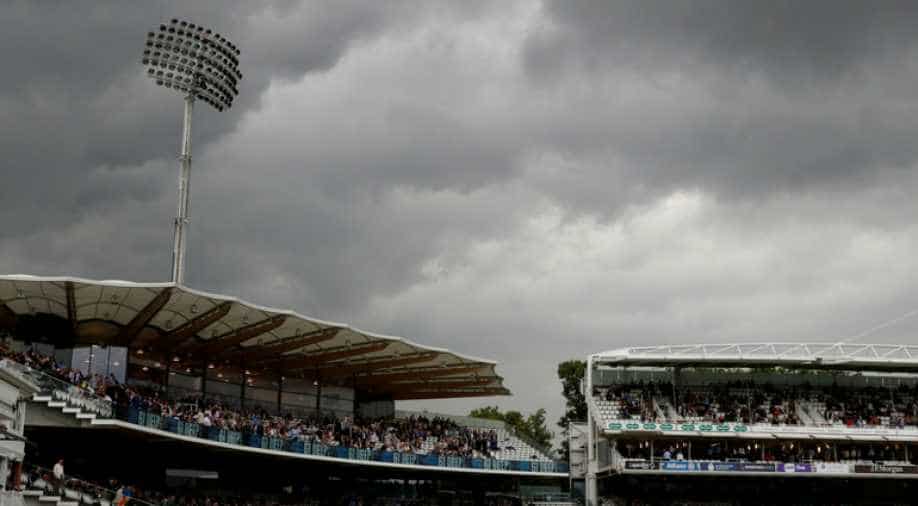 Steady rain forced the covers to be on all day. Photograph:( Reuters )

Virat Kohli-led team collapsed to 15/3 in just 8.3 on the second day of the second Test match at Lord's cricket stadium.

Earlier, England won the toss and opted to bowl. Batting first, India lost the first wicket on the fifth ball of the game.

England's pacer James Anderson stunned opener Murli Vijay and sent him back to pavilion on a duck. Another opener KL Rahul was caught behind off Anderson's stunning delivery for eight.

Cheteshwar Pujara run out for one following a dreadful mix-up with India captain Virat Kohli.

Anderson took two wickets for five runs in 15 balls in the 30 minutes' play.

Following a dreadful mix-up with India captain Virat Kohli, Cheteshwar Pujara run out for one.

England skipper Joe Root said that the weather conditions will favour the bowling unit and it will help in taking early wickets.

Chris Woakes has been included in the squad and the 20-year-old Ollie Pope will make his Test debut.

On the other hand, Indian captain Virat Kohli said that the wicket looks good better than Edgbaston and the tea, is better than before.

Cheteshwar Pujara and KL Rahul have been included in the squad replacing Shikhar Dhawan.

The first day of the game was washed away due to rain. It was the first time a whole day's Test play in England had been lost to bad weather since August 24, 2013, when the fourth day of the fifth Ashes clash at The Oval was abandoned without a ball bowled.

So far, England lead this five-match series 1-0 after a 31-run victory in the first Test at Edgbaston last week.