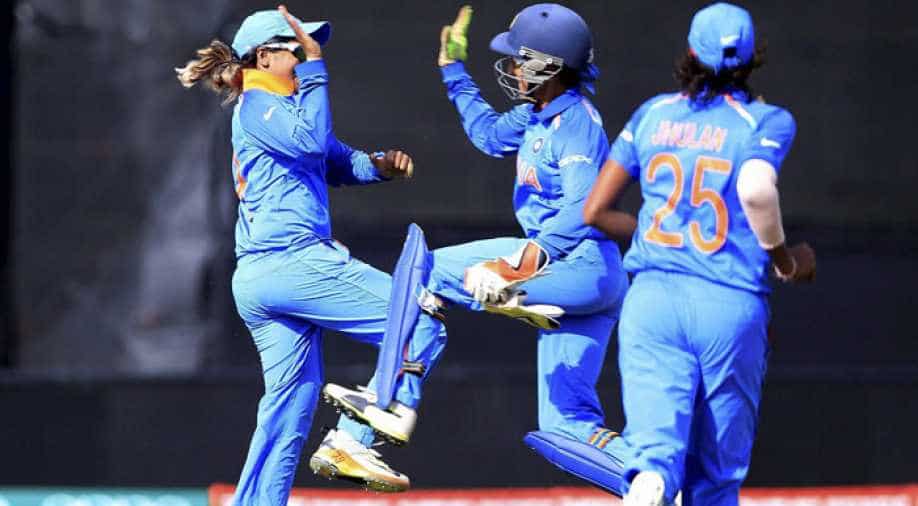 Left-arm spinner Ekta Bisht came to the fore with a stellar show as India crushed arch-rivals Pakistan by 95 runs in a low-scoring encounter to record their third successive victory in the ICC Women's World Cup here today.

India now have six points from three games and are at the top of the table.

It was a sweet revenge for the Indian eves, who were beaten at home when the two teams met in the ICC World T20 in Delhi, last year.

What looked like a sub-par score turned out to be a challenging one for Pakistani batters, who have never successfully chased more than 134 in a 50-over World Cup game.

They were all at sea against Ekta's arm balls. She removed Ayesha Zafar (1), Sidra Nawaz (0) and Iram Javed (0) in her first four overs to wreak havoc.

All three deliveries were almost identical where the batters played for the turn but it didn't turn much after pitching. She later came back to get a couple of wickets more.

Pakistan never recovered from that setback. Seamers Jhulan Goswami (1/12 in 5 overs) and young Mansi Joshi (2/9 in 6.1 overs) were also on target.

Deepti Sharma (1/21) and Harmanpreet Kaur (1/6) were economical as all the batswomen struggled to get going.

Opener Nahida Khan (23 off 62 balls) and skipper Sana Mir (29) were the only ones to reach double figures for Pakistan.

"I am proud of Ekta's performance. Whenever she has been handed the new ball, she has performed. There were some anxious moments when we lost the top-order (while batting). The partnership between Sushma Verma and Jhulan Goswami towards the end was also important. When we got to a total of 169, I knew that if we could bowl well, it could be anybody's game," said Mithali.

Man-of-the-Match Ekta said: "The plan was to pile on dot balls, because we were confident of the target we set."

She said that she never had any problems bowling with the new ball.

"I don't face much of a problem bowling with the new ball. The track spun more than it had during our game against England. Irrespective of how the pitch is, my job is to bowl and take wickets and I hope I can continue doing that for my team."

Earlier, Indian batters had a disappointing day as they could only manage a paltry 169 for 9 after electing to bat.

The Indian innings never gained momentum in their innings once in-form Smriti Mandhana (2) was dismissed cheaply. Worse, skipper Raj (8) and her deputy Harmanpreet Kaur (10) could not also score too many runs, making it difficult for the other players to accelerate.

One of the main reasons for India not being able to get past 200-run mark was because of a very slow fifth wicket partnership between Mona Meshram (6, 35 balls) and Harmanpreet (10, 23 balls). They were together for 8 overs (between 26.3 and 34.3) which yielded only 13 runs.

While Harmanpreet was finding it difficult to hit big as she is playing with a finger injury, Meshram just could not pick the singles.

This was the time when Pakistan's spinners were in operation.

The final six overs of the innings turned out to be productive for India as Sushma's attacking display fetched 41 runs during that phase.