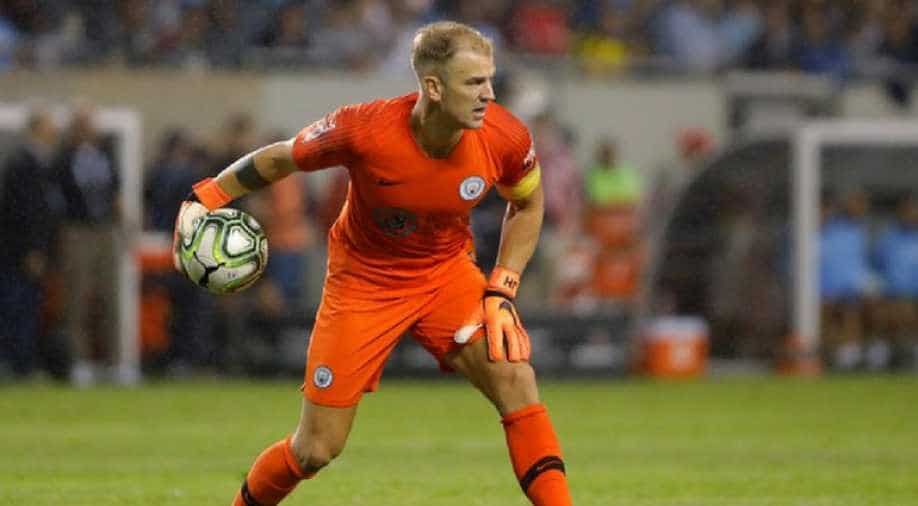 England goalkeeper Joe Hart has signed a two-year contract with Premier League Burnley as he seeks to rebuild his career after falling out of favour at Manchester City.

Burnley did not disclose the transfer fee but media reports said the 31-year-old, with 75 international caps, cost about 3.5 million pounds ($4.5 million).

Hart made 348 appearances for City and won two Premier League titles with the club.

Burnley have two other England keepers on their books in Nick Pope and Tom Heaton but both are sidelined by injuries.

Pope, who was part of England's World Cup squad in Russia but did not play, suffered a dislocated shoulder in a Europa League qualifying match against Aberdeen last month and faces several months on the sidelines.

Heaton missed most of last season with a similar injury and his return has been hampered by a calf problem.

Hart joined City in 2006 from his hometown club Shrewsbury Town and was part of their Premier League title wins in 2012 and 2014 but he fell out of favour following the arrival of Pep Guardiola as manager in 2016.

Serie A side Torino took Hart on loan and he then spent last season on loan at West Ham United where he had an inconsistent campaign and struggled to hold down a first team spot.

"It's definitely the right time for me to move on,"&nbspHart told Burnley's Clarets Player HD.

“They (Manchester City) are doing fantastic and I'm very happy for them. They need to go on and do their thing and I need to do mine.

"I feel good. I feel like I'm in the right place and I feel like this is my time to kick on now," he said.

Burnley manager Sean Dyche said Hart would have to fight to earn a starting spot at Turf Moor.

"It's strange to have three of the recent England goalkeepers in the one camp, especially here at Burnley," said Dyche.

"But the timing is right and having spoken to Joe I think it's right for him too.

"He is clear-minded in the sense that he just wants to get on and work, be part of the team and earn the right for a chance to play.

"He knows he will have to do that but he's a respectful enough person who has been around the game long enough and knows he will be working with some good keepers and a good goalkeeping coach as well."

City captain Vincent Kompany said Hart had played a key role in the transformation of the club.

"Joe joined as a young lad from Shrewsbury and leaves as a City legend," he said.

"When you look at the club he joined and the club as it is now, we have come so far during his time in Manchester and Joe has been a huge part of that," added the Belgian.

Hart is Burnley's second signing of the transfer window following the arrival of central defender Ben Gibson from Middlesbrough.