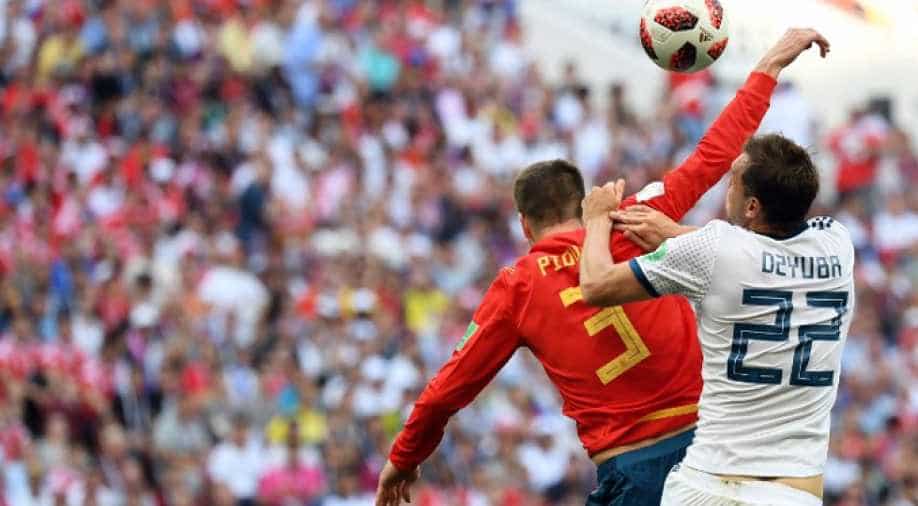 Spain's defender Gerard Pique vies with Russia's forward Artem Dzyuba during the round of 16 football match between Spain and Russia at the Luzhniki Stadium in Moscow. Photograph:( AFP )

Although Piqué scored during the shootout but it was his "hand" which upset football fans.

Gerard Piqué's 'hand' which handed Russia a crucial penalty in the second round of the World Cup at Moscow has riled football fans with several taking digs at his partner singer Shakira.

Piqué's 41st-minute' handball' allowed the hosts to get back into the game after Spain had taken the lead earlier with Russia's Ignashevich's 'own goal'.

One of the funniest moments of the World Cup is #Pique trying to argue that this shouldn’t have been a penalty #RussiaSpain pic.twitter.com/EoIXX4FkI5

The match drifted after that with neither team able to score a goal till extra time, resulting in the first penalty shoot-out of the World Cup which Russia clinched after Koke and Aspas missed the goal during the nerve-racking penalty shoot-out.

Although Piqué scored during the shootout but it was his "hand" which upset football fans.

Now we know where did Gerard Pique get his inspiration from. His own wife Shakira.#ESPRUS #WorldCup #RUS #ESP pic.twitter.com/ZePUb7dcGh

At the end, Pique still wins. He has Shakira. He won at life! #Pique #shakira #RussiaVsSpain #Russia2018 pic.twitter.com/vwLxU9cAFw

You can transfer the money to #Piqué ‘s bank account #ESPRUS pic.twitter.com/MWfyMBhAxY