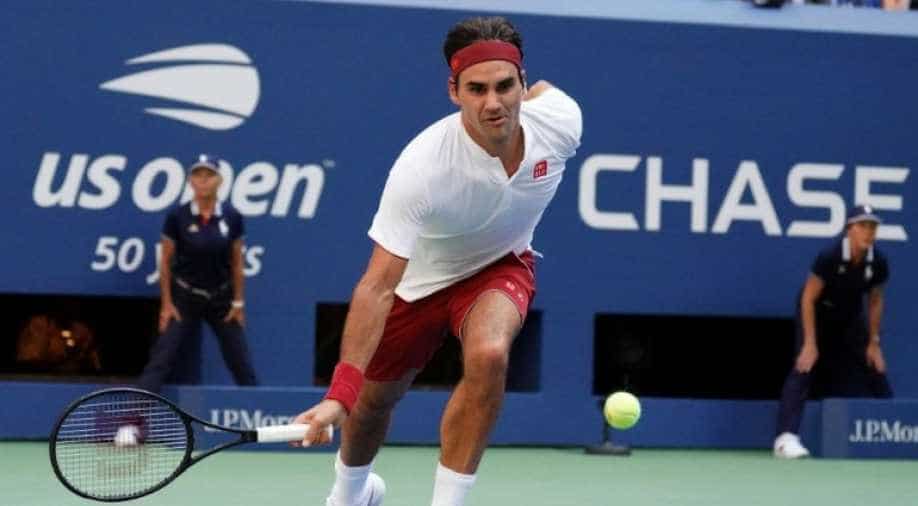 Five-time champion Roger Federer found a new way to amaze Saturday as he reached the US Open last 16 with a 6-4, 6-1, 7-5 victory over Nick Kyrgios.

The second-seeded Swiss withstood an early onslaught from the unpredictable Aussie, firing 51 winners that included an unlikely forehand flicked around the net post that Kyrgios couldn't believe.

"Definitely a bit of luck and good feet," Federer said of the shot that denied Kyrgios a game point -- although the Australian would go on to hold for 4-3 in the third set.

Federer had the luxury of a two-set lead when the duo's most entertaining exchanges thrilled the Arthur Ashe Stadium crowd.

Things would have been much different if Kyrgios could have converted one of four break points in the seventh game of the opening set.

"I think if he breaks there he probably runs away and wins that first set," Federer said. "He came out firing a lot of aces and feeling good."

But Federer escaped, breaking Kyrgios to pocket the first set and dominating the second.

"He's an unbelievable frontrunner," Kyrgios said. "When he gets in front, there's not much you can do."

Federer will be seeking a 13th appearance in the US Open quarter-finals when he plays Australian John Millman, who reached the last 16 of a major for the first time with a 6-4, 4-6, 6-1, 6-3 victory over Kazakhstan's Mikhail Kukushkin.

Djokovic beset by injury and self-doubt to start the season, broke out of the doldrums with his 13th Grand Slam title at the All-England Club.

He backed that up with a Cincinnati Masters title to put himself into the title mix along with Federer and world number one Rafael Nadal despite his relatively modest sixth seeding.

The third round was the end of the line for men's and women's fourth seeds from Germany -- Alexander Zverev and Angelique Kerber.

Kerber, the 2016 US Open winner tying to become the third woman in the last 20 years to win both Wimbledon and the US Open in the same season, was bundled out by Slovakia's Dominika Cibulkova 3-6, 6-3, 6-3.

Zverev, the 21-year-old sensation who has lifted titles in Munich, Madrid and Washington this year and reached finals in Miami and Rome fell, 6-7 (1/7), 6-4, 6-1, 6-3 to veteran compatriot Philippe Kohlschreiber.

It was another Grand Slam disappointment for Zverev, touted as the youngster most likely to end the major dominance of Federer, Djokovic and Nadal.

Kerber's defeat followed the early exits of world number one Simona Halep and No. 2 Caroline Wozniacki -- who were both also seeking a second Grand Slam title of the year.

Kerber didn't blame a domino effect for her departure.

"I just try to go my way, I'm not looking around who was winning or who was losing," said the German, who was at a loss to account for a bad day at the office.

"You have sometimes days where you are trying everything, but it's not really working as you wish," she said.

Vondrousova, through to a Grand Slam third round for the first time, will play Ukraine's Lesia Tsurenko, who defeated Czech Katerina Siniakova 6-4, 6-0 after taking out Wozniacki in the second round.