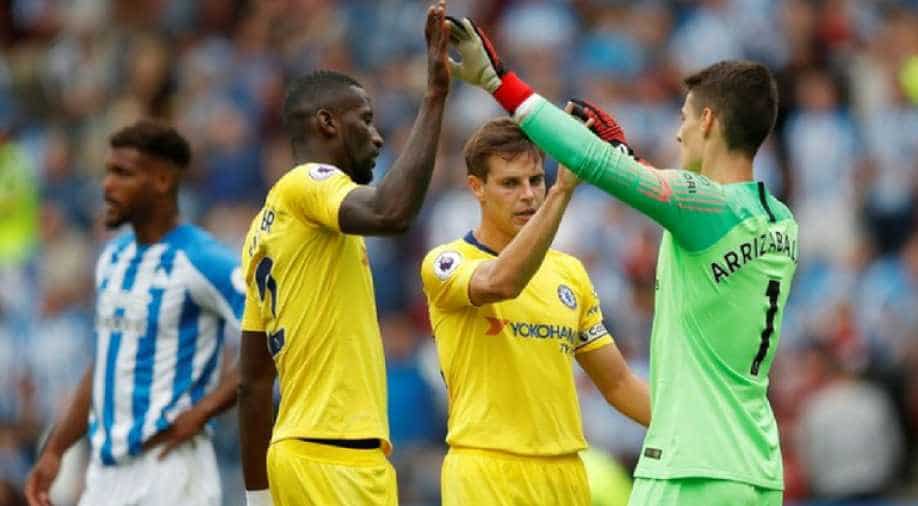 Chelsea manager Maurizio Sarri made a winning start to life in the Premier League as his team enjoyed a 3-0 win over Huddersfield Town at the John Smith's Stadium on Saturday.

The former Napoli coach Sarri, who replaced fellow Italian Antonio Conte at Chelsea in July, said he was delighted to have secured the three points in his first game in English football.

"I am really very happy because in the first part of the season I think it is not easy for us to gain points," said Sarri.

"The first half was hard -- maybe if you look at the result you can think about an easy game, but in the first half we were in trouble for 15 minutes against a very physical team.

"We are not a physical team and I think the best of the game is the capacity to suffer for 15 minutes. Then in the second half the opponents were a bit tired and it was easier," he added.

Roared on by the loud home support that had helped Huddersfield to a surprise survival at the end of last season, David Wagner's side had plenty of early pressure.

Sarri opted for a 4-5-1 formation, abandoning Conte's well established system featuring three central defenders, and Chelsea struggled initially to get a foothold in the game.

But having dealt with a series of crosses whipped into the box by the Yorkshire side, Chelsea went ahead in the 34th minute when Willian's cross from the left found N'Golo Kante whose mis-hit shot squirted past keeper Ben Hamer.

Huddersfield showed their spirit by continuing to attack and striker Steve Mounie headed against the post after Mathias Jorgensen had flicked on a corner.

But the game turned decisively towards the visitors when Chelsea doubled their advantage just before the interval when Marcos Alonso burst into the area and went down under challenge from Christopher Schindler.

Debutant Jorginho coolly converted the penalty, a skip on his run-up leaving Hamer on his backside, as the Brazil-born Italian international, signed from Napoli, calmly slotted home.

Great start of the @premierleague , I’m very happy with my debut. Come on blues!! @chelseafc

Huddersfield ran out of steam - and ideas - after the break and Chelsea were content to keep possession and control of the game but there was still time for a reminder of Eden Hazard's quality.

The Belgian only returned to training recently after his run to the World Cup semi-finals at the World Cup and Sarri, sensing he was not in shape for 90 minutes, started him on the bench.

The winger, long linked with Real Madrid, made a major impact after he came on the field with his dribbling ability immediately evident.

The Belgian was at the heart of a superbly constructed counter-attack that produced Chelsea's third as he broke from midfield and slipped a perfectly-timed pass to Pedro who beat Hamer with an expert finish.

While Sarri left smiling, Wagner felt his side had shown encouraging signs despite the scoreline.

"I have seen passion, desire, the spirit we usually have in our game. I felt the energy in the stadium. We were unlucky," he added.