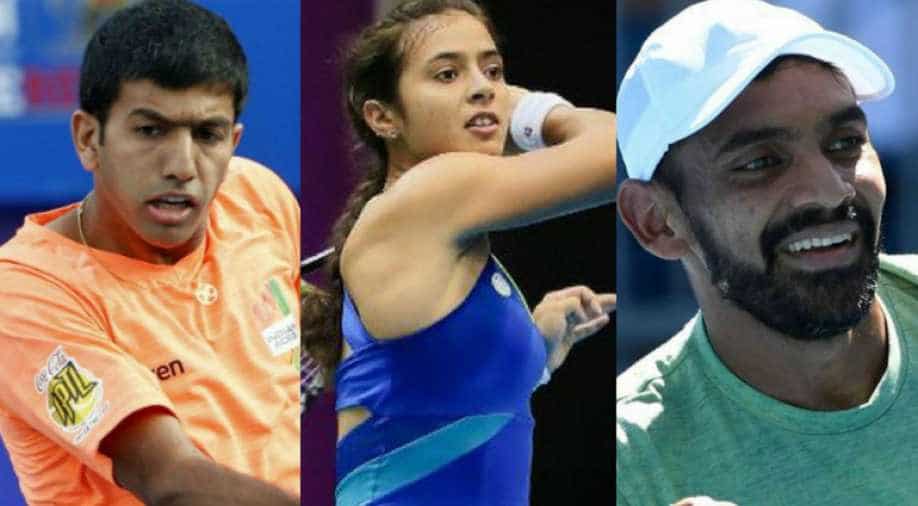 Ankita Raina and top seeds men's doubles pair of Rohan Bopanna and Divij Sharan assured India of at least a couple of bronze medals in the tennis competition by progressing to the semifinals at the Asian Games here today.

World no.189, Raina dispatched Hong Kong's Eudice Chong 6-4 6-1 to enter the last four of the women's singles competition. In all the five events here, both losing semifinalists get a bronze.

Raina played well against an opponent ranked more than 400 places lower than her but also benefitted from a more open draw after the shock loss of world no. 92 Luksika Kumkhum of Thailand.

Ankita has assured India's third medal in women's singles at the Asian Games with Sania Mirza being the only other Indian to do so (silver in 2006, bronze in 2010).

Ankita was down 1-4 in the first set before bouncing back to close it in 54 minutes. She took only 27 minutes to claim the second set.

"Ankita is a fighter and has volunteered to play in all three events in this heat. She played well today. The Thai player in her draw lost, so that opened up the draw for her," India captain and coach Zeeshan Ali told PTI.

Bopanna and Sharan, who don't have much experience of playing together, played a solid match against the seasoned pairing of Yang Hsieh and Yang Tsung-Hua of Chinese Taipei.

The win in the quarterfinals must have given the Indians a lot of confidence and they are well on their way to a gold medal.

Ramkumar Ramathan, second seed in the men's singles, however disappointed in his round of 16 match against Jurabek Karimov of Uzbekistan.

The world no. 134 played a serve and volley game for the majority of the match on the slow courts of Jakabaring Tennis Center and paid the price by losing 6-3 4-, 3-6 against the 428th ranked player.

"Tactically, Ram got it all wrong. The courts were on the slower side, all the more reason he did not need to serve and volley. He kept doing that and paid the price for it. It was not expected from a player of Ram's caliber," said Ali.

Prajnesh Gunneswaran, however, got one step closer to a medal after advancing to the quarterfinals. He beat Vietnam's Ly Hoang Nam 6-3 5-7 6-4 in the punishing heat of Palembang.

The other men's doubles pairing of Sumit Nagal and Ramanathan too crashed out of the competition.

The only Indian pairing left in the mixed doubles draw is of Bopanna and Raina, who beat Wong Chun Hun and Eudice Chong of Hong Kong 6-4 6-4 to enter the quarterfinals.