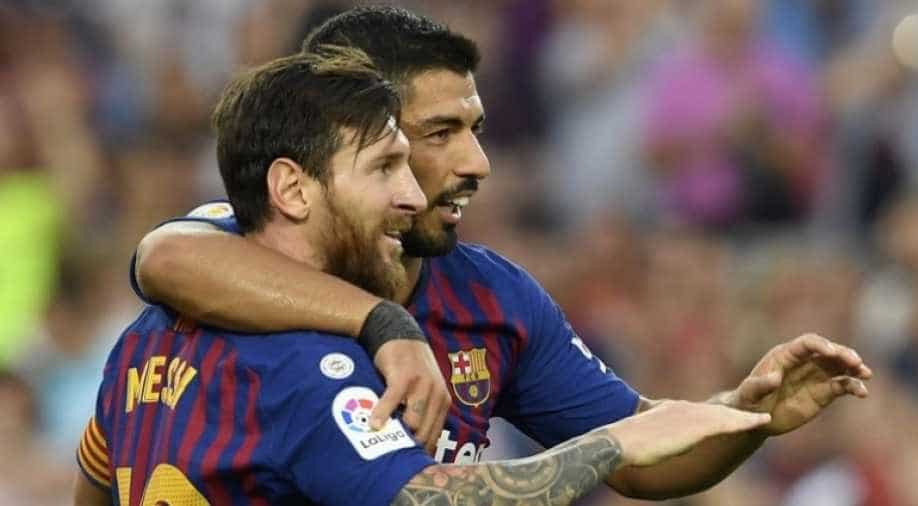 Lionel Messi and Luis Suarez scored twice each as La Liga champions Barcelona turned on the style to hammer Huesca 8-2 on Sunday while Real Betis ended a 12-year wait for a home victory over local rivals Sevilla by winning the local derby 1-0.

Valencia are still without a win this season after being held to a 2-2 draw at neighbours Levante and Alaves came from behind to beat visiting Espanyol.

Top-flight debutants Huesca took a shock early lead in their first league visit to the Nou Camp when Colombian forward Cucho Hernandez deflected the ball in from point-blank range but Messi soon dampened the celebrations of the visiting supporters by cannoning a shot in off the post to level.

An own goal from Jorge Pulido gave Barca the lead and Suarez extended their lead by scoring for the first time in five games in all competitions after the video assistant referee (VAR) overturned an offside call from the linesman.

Huesca`s Alex Gallar pulled one back before halftime to make it 3-2 but any hope of a revival from the visitors was soon killed off by three Barca goals in 11 minutes from Ousmane Dembele, Ivan Rakitic and another strike from Messi.

Jordi Alba capped a brilliant performance to score the seventh after setting up two of the earlier goals, while Suarez added number eight with a penalty in stoppage time as Messi turned down the chance to complete a hat-trick.

The thrashing lifted Barca above Real Madrid at the top of the La Liga standings on goal difference after three games.

"We were sleeping at the start of the game but their goal helped wake us up and we reacted well," Suarez said.

"It`s good to be top of the league before the international break, but the best thing about this win is seeing how well we played."

Barca also put eight goals past Huesca in their last meeting at the Nou Camp in the Copa del Rey in an 8-1 win in 2014, while this was their biggest win in the league since thumping Deportivo La Coruna 8-0 away from home in April, 2016.

Joaquin, 37, became the oldest scorer in a Seville top-flight derby when he rose to head home at the near post in the 79th minute, shortly after the visitors had had midfielder Roque Mesa sent off for two bookings.

Betis went into the derby under pressure after taking only a point from their first two games and made an intense start as Cristian Tello and Loren went close to scoring while Sergio Canales had a goal ruled out for offside.

Sevilla nearly scored through Franco Vazquez and Gabriel Mercado but handed their rivals an extra man advantage when Mesa was booked for fouling goalkeeper Pau Lopez, and Joaquin took full advantage to the delight of the 60,000 supporters inside the packed Benito Villamarin stadium.

"This was the dream derby, even though I`ve played in many of them, this is what I dreamed of," said Joaquin, who is in his second spell at boyhood club Betis.

"Scoring in front of my fans, I couldn`t have asked for more."