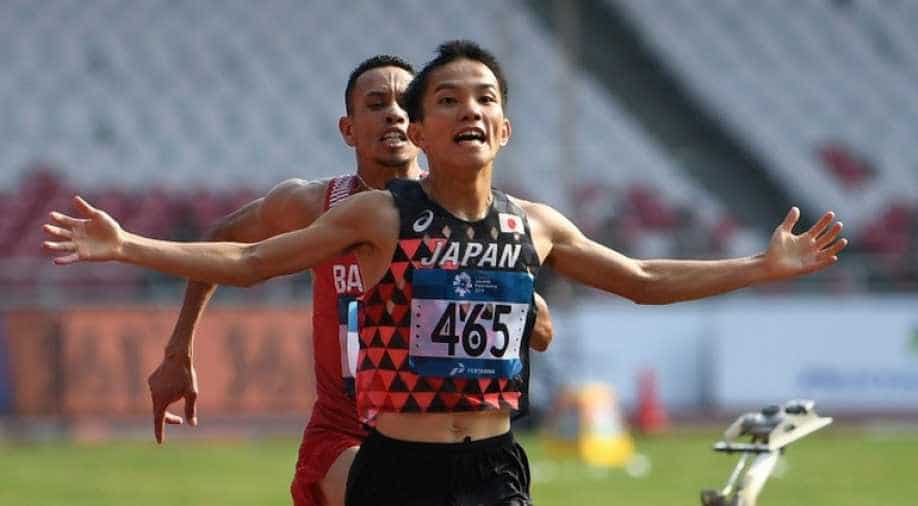 Japan's Hiroto Inoue (R) gestures as he crosses the finish line ahead of Bahrain's Elhassan Elabbassi to win the men's marathon athletics event during the 2018 Asian Games. Photograph:( AFP )

Japan's Hiroto Inoue was accused of pushing his rival in a controversial sprint finish to the Asian Games marathon Saturday, as the runner-up from Bahrain lodged a complaint with race officials.

Inoue and Bahrain's Elhassan Elabbassi entered the stadium in Jakarta neck and neck, before the Japanese athlete opened up a small lead.

In the final 100 metres, Elabbassi attempted to overtake Inoue on the inside but fell back after apparent contact.

"The number one (leader) pushed me," said Elabbassi. "I would have won."

Elabbassi's coach Gregory Kilonzo said the team manager had filed a complaint over the incident. Bahrain team officials confirmed they were meeting with the technical delegate after the race.

"He was almost overtaking the number one, then the guy pushed him," said Kilonzo. "He was pushed and almost went down."

"The Japan guy, when he saw he was almost overtaken, he decided to push."

Both athletes finished with a time of 2 hours, 17 minutes and 22 seconds, but pre-race favourite Inoue came in fractionally ahead.

"I don't know what happened before the end," said Inoue. "I was surprised but I do not understand what happened."