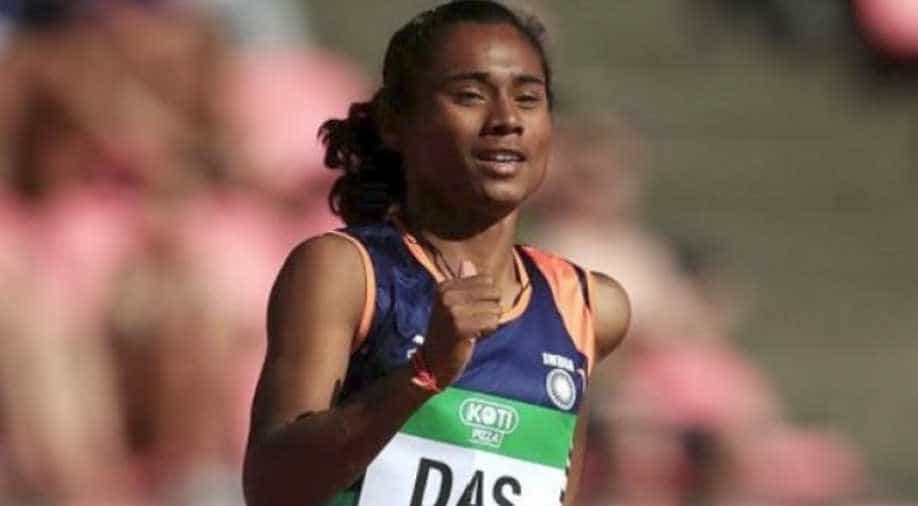 Indian sprinter Hima Das on Sunday clinched the silver medal in the women’s 400m race at the ongoing Asian Games 2018. Das came second to Salwa Naser to clock 50.79s and broke her own national record, which she set yesterday.

Meanwhile, Muhammed Anas also won silver in the men's 400m events with a timing of 45.69.

Anas finished behind Qatar's Abdalelah Hassan, who clocked 44.89, while the other Indian in the fray, Arokia Rajiv, missed bronze, finishing fourth with a timing of 45.84.

He came into Sunday's final having topped the list of qualifiers with a timing of 45.63 ahead of Qatari Mohamed Abbas, who finished in 45.81 seconds.

One of India’s most admired athletes @HimaDas8 bags the coveted Silver in the Women’s 400m Final. India rejoices in her glory. Congratulations to her and all the best for her future endeavours. @asiangames2018 pic.twitter.com/wbxMkcBzi9

Hima Das trails Salwa Naser by a fair bit on the home stretch but she wins women's 400m silver medal with a National record time of 50.79 seconds, the first sub-51 by an Indian. #AsianGames2018 #Athletics Nirmala finished fourth in 52.96. pic.twitter.com/pQawH31oiq

#TeamIndia at the #AsianGames2018#MuhammedAnasYahiya wins Silver No. 9 for India as he finishes 2nd in the Men's 400m Finals clocking 45.69 while #ArokiaRajiv finished 4th with a timing of 45.84. #WellDone @muhammedanasyah ???? & Arokia for your efforts!#IAmTeamIndia pic.twitter.com/kTmJe2KiHX

In the qualification round on day 7, Hima Das broke a 14-year-old national record when she clocked 51.00s as she qualified for the 400m final. The previous national record was set by Manjit Kaur (51.05s) in Chennai in 2004.

Hima had become the first Indian track athlete to win a gold medal with a timing of 51.46 at the Under-20 World Athletics Championships.

In the other events, Olympic medallists PV Sindhu and Saina Nehwal today headed for a gold medal showdown at the 18th Asian Games after their quarterfinal victories ensured India’s first ever women’s singles medals at the Continental event.