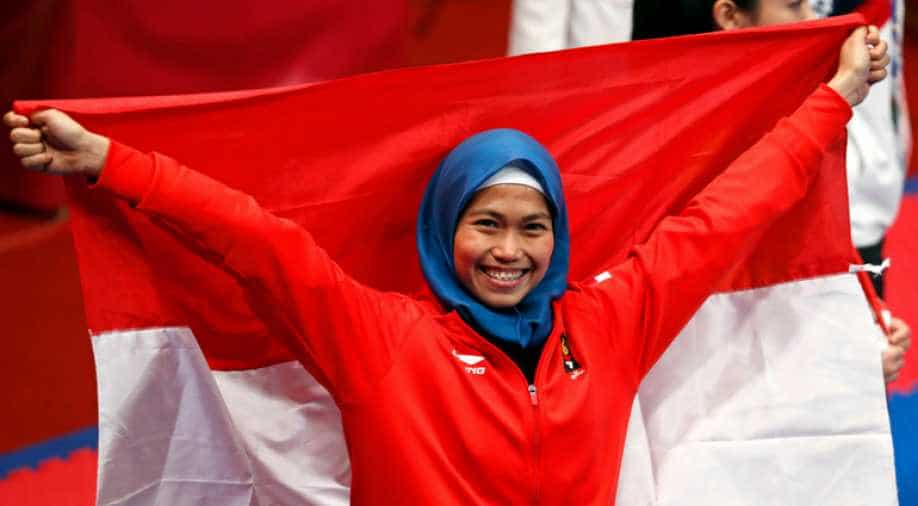 Defia Rosmaniar of Indonesia celebrates her gold medal on the podium. Photograph:( Reuters )

Defia Rosmaniar produced Indonesia's first gold medal in their home Asian Games and instantly became toast of the social media in her country on Sunday.

The 23-year-old taekwondo athlete scored 8.690 to pip Iran's Marjan Salahshouri (8.470) to the gold in women's individual poomsae event, triggering wild celebration at the Plenary Hall of the Jakarta Convention Centre.

Her head covered in a hijab and the national flag draped around her shoulders, an ecstatic Rosmaniar ran around the arena before being escorted to the VIP gallery where Indonesia President Joko Widodo congratulated her.

Rosmaniar's victory earned Indonesia their first ever taekwondo gold in the Asian Games, which they are hosting for the second time. She was also a popular topic on Twitter with local celebrities congratulating her while fans ran hashtags like #terimakasihdefia which means 'Thank You Defia'.

Leading the praise was Widodo, whose own motorbike stunt in Saturday night's opening ceremony has created a similar buzz on social media.

"Defia, the people of Indonesia are proud of you!" Widodo tweeted.

Rosmaniar's victory is a boost for Indonesia who have set themselves a target of 16 gold medals at the Games.

South Korea, who have dominated the event at the Asian Games since its 1986 inclusion, have won two golds, one silver and one bronze in individual and team poomsae events so far.