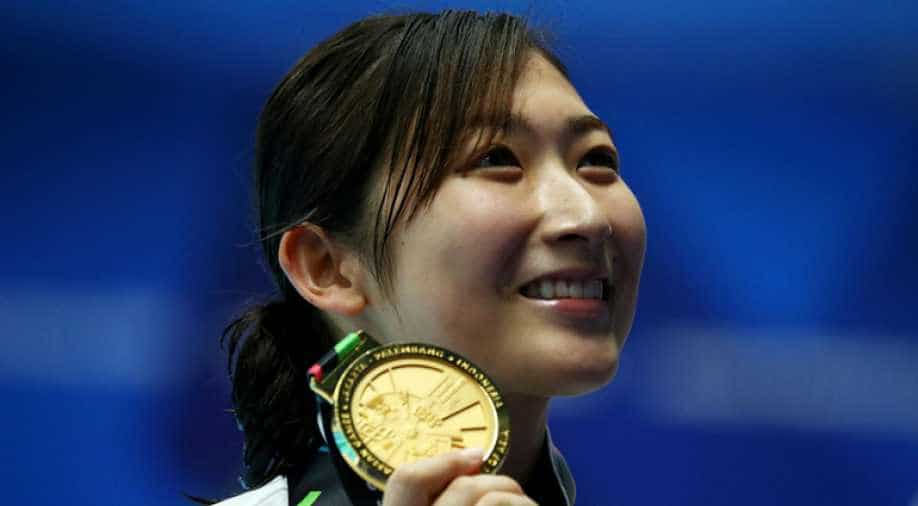 Japan's Rikako Ikee celebrates with her medal. Photograph:(Reuters)
Follow Us

Japanese swimmer Rikako Ikee became the first female athlete to be named the Most Valuable Player (MVP) at an Asian Games on Sunday after the teenager scooped an unprecedented six gold medals in the Jakarta pool.

Only North Korean shooter So Gin-man, who won seven golds and a silver at New Delhi in 1982, has won more titles at one Asian Games but the 18-year-old Ikee also picked up two relay silvers to match his record tally of eight medals.

All six golds were achieved in Games record times and her achievement was made all the more remarkable as she arrived in Jakarta immediately after the Pan Pacific championships, where she won a gold, two silvers and a bronze.

Ikee, whose gold medal haul is the most for a female athlete at a single Games, was the unanimous choice for the most valuable player award, the Olympic Council of Asia said on the final day of the multi-sport event on Sunday.

"I had heard that for a while there was no MVP award and I felt very sad about that, but there was a re-evaluation and I am very honoured to be able to receive such a wonderful award," Ikee said after picking up her trophy and a cheque for $50,000.

"Actually after the swimming competitions, I went back to Japan. I didn't think I had to come back to Indonesia again. This has been a place with lot of good memories."

Ikee became the fourth Japanese athlete to win the award since its inception at the 1998 Bangkok Games and can now be expected to shoulder a huge burden of expectations when Tokyo hosts the Olympics in two years' time.

"There are two more years and I know what I need to do and I will strengthen those points with that (two years) in mind," she told reporters. "I will make effort to make sure that I can perform at my best in my own country."

Japan finished the Games with 75 gold, 56 silver and 74 bronze for a total haul of 205 medals, making it the first time the nation secured second place on the medals table since the country hosted the regional gathering at Hiroshima in 1994.

Japan tied China on 19 swimming gold medals in Jakarta but edged out their rivals in the discipline by 52 total medals to 50. China topped the overall medals table with 289, 132 of them gold.

Yasuhiro Yamashita, the head of the Japanese delegation to the Asian Games, lauded the swimmers for a performance that exceeded expectations.

"Firstly, I have to say that our swimming team made a lot of effort," Yamashita told reporters.

"They won 19 (gold) medals and that provided momentum to the entire Japanese team and created an environment where the athletes in various events could do their best in order to challenge their dreams."

Japanese women won more golds (at the Games) than their male counterparts and it was a very encouraging sign, Yamashita said.

"Once again, this was an event where the performance of (Japanese) women athletes was very noteworthy," he added.

"I am hoping that in the 2020 Tokyo Olympic Games, the women athletes representing Japan will be able to shine -- I think this is something that we can anticipate."