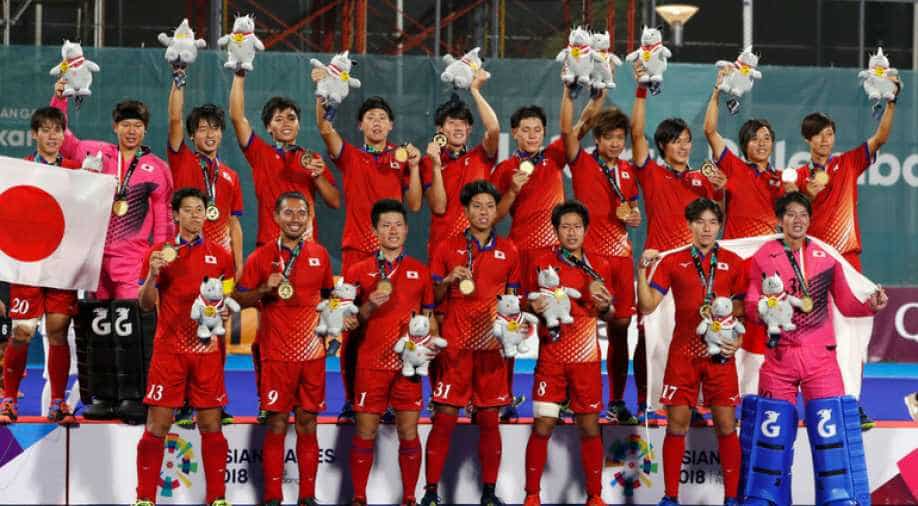 Japan staged a spectacular regulation time comeback to draw 6-6 before edging out Malaysia 3-1 in a penalty shootout and claim the men's hockey gold at the Asian Games on Saturday.

Trailing 4-1 in the second period and then 5-2 in the fourth, Japan pumped in three goals through Kentaro Fukuda, Kenta Tanaka and Koji Yamasaki in a seven-minute blitz to level the pulsating contest.

Tengku Ahmad Tajuddin completed his hat-trick in the 59th minute to put Malaysia ahead again, rekindling their hopes of an Asian gold which secures a place at the 2020 Tokyo Olympics.

But Hiromasa Ochiai levelled when he scored from a penalty corner with 13 seconds left to force the shootout won by Japan who already have a place at the Tokyo Games as hosts.

India, Asian Games winners in Incheon four years ago, won the bronze by beating arch-rivals Pakistan 2-1 in what was a poor consolation for hockey's former giants.

Harendra Singh's side were impressive in the early stages of the competition, pumping in 56 goals - 26 in a rout of Hong Kong alone - in their first four matches and looked on course for a successful title defence.

A 7-6 shootout defeat by Malaysia in the semi-finals not only dashed that hope but left India with a trickier qualification process for the Tokyo Games.

"This is surely not what we came here for," Singh said after Saturday's win against Pakistan. But at least we are not returning empty-handed.

"Yes, the semi-final defeat was a big setback but my boys regrouped and showed character in this match. I'm proud of them," added the coach.

India won the last of their eight Olympic hockey golds in 1980 but have not claimed a medal since then.

Their women's team also failed in their bid to secure qualification for the Tokyo Games, having to settle for silver after Saturday's 2-1 defeat by Japan.