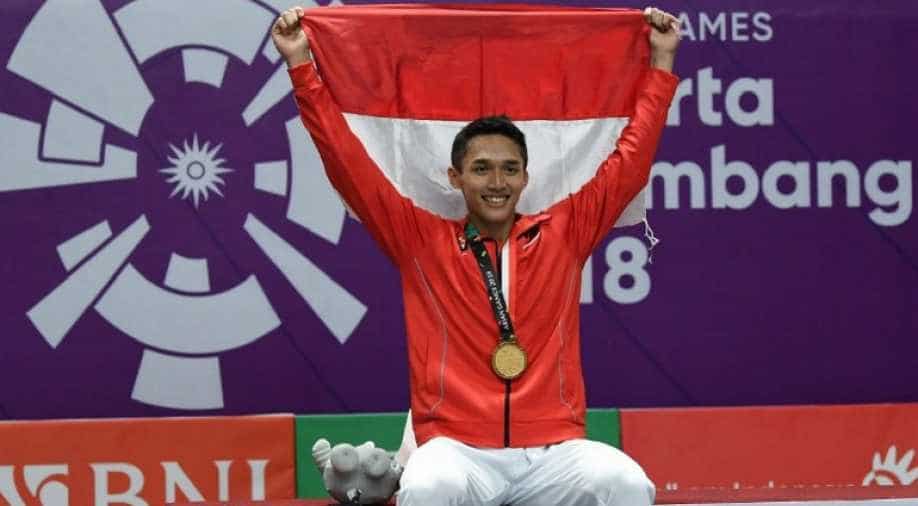 Jonatan Christie gifted Indonesia the Asian Games gold medal they most yearned for when he beat Taiwan's Chou Tienchen in an exciting men's singles badminton final in front of a vociferous home crowd on Tuesday.

The 20-year-old giant-killer, who defeated world champion Kento Momota of Japan on his way to the final, won 21-18 20-22 21-15 to become the first Indonesian to claim the Asian Games men's singles gold since Taufik Hidayat in 2006.

It was not all doom and gloom for Taiwan, however, as world number one Tai Tzuying won the women's singles gold, defeating India's Pusarla Sindhu 21-13 21-16 in a one-sided final.

Badminton is hugely popular in the Southeast Asian host nation and has attracted thousands of spectators at the venue while millions have watched it on television, making it among the most-watched disciplines at the Asian Games.

Christie, known as "Jojo", finished the match off with one of his many powerful smashes down the line and took off his shirt in jubilation, imploring the ecstatic crowd to cheer even louder.

After taking down world number five Chen Yufei of China in the opening round, Christie defeated Momota in the quarter-finals to assure the hosts of two medals in the event.

Christie's triumph made it a gold and bronze for Indonesia after Chou defeated Sinisuka Ginting in the last four.

"First of all I am a bit sad because Anthony (Ginting) didn't make it to the final. If he were competing today Indonesia would have gotten a gold and silver," Christie told reporters.

"I am definitely happy since this is my first Asian Games and it never occurred to me that I could win because there were many qualified athletes such as Kento Momota, Chen Long... this is a blessing."

Tai took a 5-0 lead in the opening set and never looked back.

"I`m surprised that it ended so quickly. I was preparing for a tough match," the 24-year-old said. "I`ve got some experience for important matches now and it`s time to set more challenges for myself and do the best."

The 7,000-capacity badminton stadium has been a sea of red and white – Indonesia`s national colours.

The Taiwanese players had support from Chinese fans who were left with no players to root for in the medal rounds of men`s and women`s singles.

"The two straits is one family as this time. China team didn`t make it (to final) so we support Chinese Taipei," said 26-year-old Mai Shuwen, hailing from China`s Shenzhen.

"I hope China will learn its lesson from this Asian Games and return to the podium."

Indonesia made it a one-two in the men`s doubles when Kevin Sukamuljo and Marcus Gideon beat compatriots Muhammad Rian Ardianto and Fajar Alfian in a tense final.

MS Dhoni one of the best to have played the game, he single-handedly built CSK: Dwayne Bravo