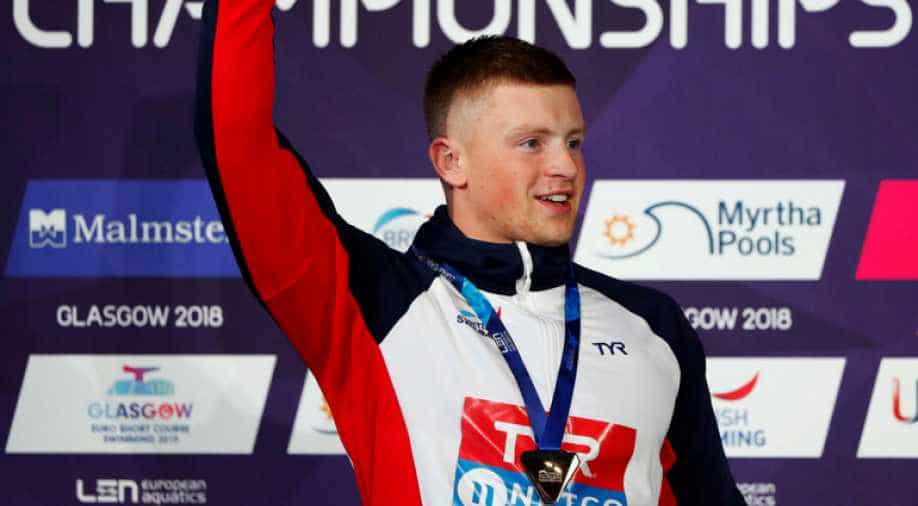 Adam Peaty of Britain during the medal ceremony. Photograph:( Reuters )

Adam Peaty's world 100 metres breaststroke record, set at the European Championships on Saturday, has been amended after problems with the race-timing equipment came to light, officials said on Sunday.

The time, revised from 57.00 seconds to 57.10, is still faster than Peaty's previous record of 57.13 set at the 2016 Rio de Janeiro Olympics, sparing organisers the embarrassment of having to wipe the 23-year-old Briton`s new mark from the record books.

A second world record set on Saturday, the 50 metres backstroke mark of Russian Kliment Kolesnikov, remains unchanged as it was not one of the nine races that were affected by the equipment problem.

The European Swimming League (LEN) said the starting mechanism had been "incorrectly configured" so that nine of Saturday's races at the Tollcross International Swimming Centre showed times that were 0.10 seconds too fast.

"During the afternoon competition session on Saturday, the LEN Technical Swimming Committee became aware of a potential problem in relation to the race timing equipment for the first nine races of that session," a statement from the governing body said.

"Upon thorough investigation, it became apparent that the starting mechanism had been incorrectly configured prior to the start of the session which resulted in all reported times being 0.10s faster due to a configuration delay of 0.10s.

"The LEN Technical Swimming Committee, working with the timing system operators, carried out extensive tests to confirm this system configuration error and have, with the benefit of the necessary technical analysis, revised all recorded times for the first nine races during that session.

"The (committee) confirms that all times recorded during the first three competition sessions and after the first nine races of that session are accurate."

British swimming officials took the revision in their stride, with national performance director Chris Spice saying: "We support LEN's vigilance in this matter and appreciate the time they have taken to make sure all times are correct.

"We want this event to be remembered for the amazing achievements of the athletes so it is important that the results are correct. We don`t want this to take away from Adam`s amazing performance which we all experienced in a fantastic environment."