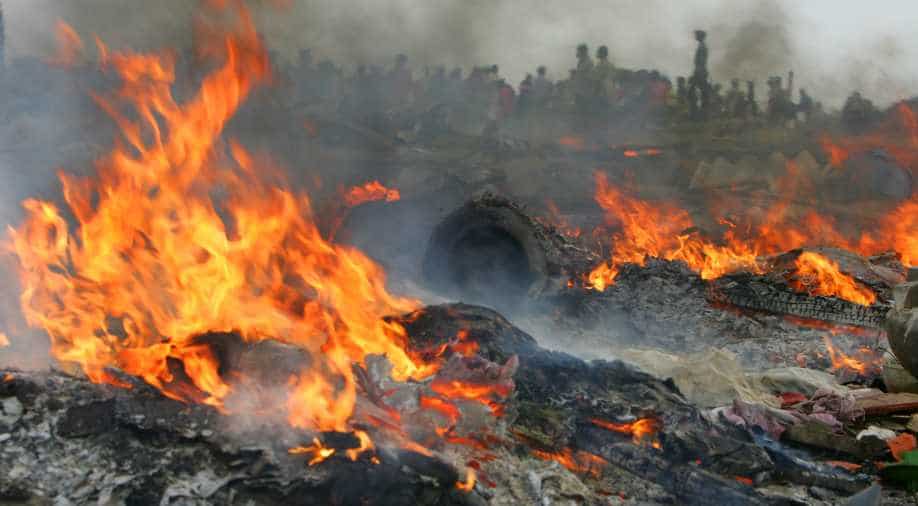 Fires burn along the beach as the clean up work continues and everything is burned January 2, 2005 in Moratuwa, Sri Lanka. Photograph:( Getty )

Follow Us
Flying shrapnel triggered by explosions at an ammunition depot on the edge of Sri Lanka`s capital destroyed a hospital and hundreds of homes, sending thousands scrambling for cover, authorities said today.
At least one soldier burnt to death in the worst ammunition depot fire in Sri Lanka`s history and nearly 50 people were treated for injuries or smoke inhalation, Colombo medical chief Palitha Mahipala said.
The fire was extinguished around 12 hours after it started on Sunday evening at the Salawa military complex, setting off explosions that went on through the night.
"The fire has been put out, but still there are intermittent explosions," army spokesman Jayanath Jayaweera told AFP.
"That is why we are asking residents to keep away."
Thousands of people living near the site were ordered to leave their homes and move to schools and temples.
"The Salawa hospital was evacuated soon after the fire and this morning we found that the hospital has been badly damaged," a police officer at the scene told AFP.
"Fortunately, all the patients there were taken out in time."
Government spokesman Rajitha Senaratne said the national security council would meet today to review the blast.
"This is a military matter and they must investigate if this was an accident or sabotage," said Senaratne.Businessman Neville Nishantha, 44, said he fled with his wife and three children as the explosions began and returned today morning to see his house in ruins.
"A mortar bomb had gone through my roof and hit the living room," Nishantha said.
"A wall collapsed in the bedroom where my three children would have slept."
"We are lucky to have escaped. All of us started running as the explosions began."
Wasantha Fernando, 45, said he abandoned his home and ran as thick black smoke filled the area.
"When I got back this morning the entire place was covered in ash," he said, adding that his walls had cracked and the house was unstable.
Shortly after the first blast, residents in Salawa were seen leaving in droves as police shut the main highway after shrapnel fell on it too.
The night sky was bright with an orange glow as huge fires raged and the area continued to shake every few minutes. Flying debris could be seen from three kilometres (two miles) away, an AFP photographer said.
This was the second time in three weeks that residents of Colombo were forced to leave their homes. Last month, some 200,000 residents in the capital were driven out of their homes by floods caused by the Kelani river bursting its banks.
The Salawa military complex, just by the Kelani river, is located at a former plywood factory about 36 kilometres east of Colombo. It is used by the army to store heavy weaponry and ammunition, including rockets.
"Pretty chaotic scenes on the road," tweeted deputy foreign minister Harsha de Silva, who was in the area on Sunday night.
"I am estimating that thousands are evacuating."
Law and order minister Sagala Ratnayake said the fire had spread quickly to two ammunition depots within the military complex and emergency responders initially struggled to extinguish it because they could not reach the source.
Officials declared today a holiday for nearby schools and government offices.
The explosion was the worst at a military installation since the end of Sri Lanka`s decades-long Tamil separatist war in May 2009.
In June 2009, a much less intense explosion at an army ammunition storage facility in the northern district of Vavuniya, 250 kilometres north of Colombo, injured several soldiers.
Government forces crushed Tamil Tiger rebels in a no-holds-barred military campaign that also triggered allegations of up to 40,000 ethnic Tamil civilians being killed in government bombardments.