The wushu women of Kabul 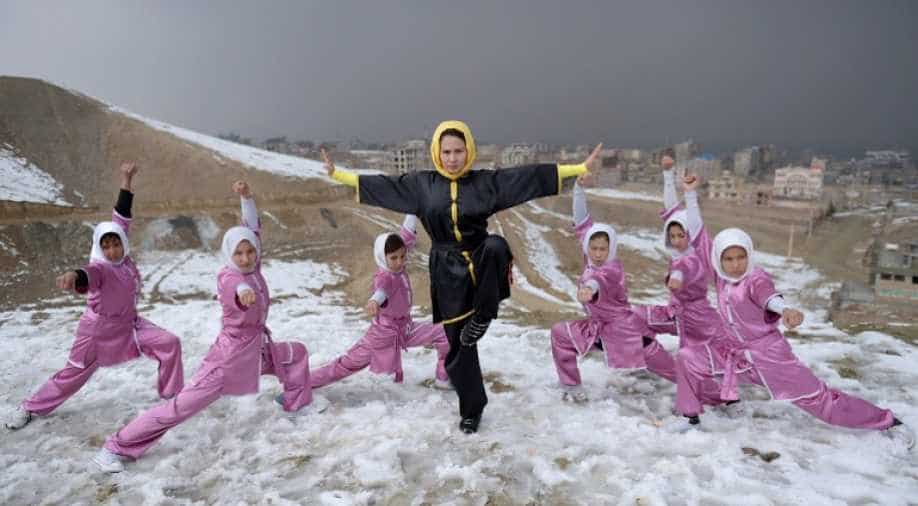 Sima Azimi, (C) left her club in western Kabul, sheltered from prying eyes by a discreet but heavy metal door, to train her young pupils in the open air. Photograph:(AFP)
Follow Us

Sima Azimi frowns as she pirouettes in the snow, suspended for a moment against the sky on a hill overlooking Kabul and above the conservatism of contemporary Afghanistan.

There is still a need for boldness among young Afghans who wish to indulge in sport, even more so with a martial art like wushu, popularised by stars such as Jackie Chan and Jet Li, which Azimi has taught for a year in the war-torn capital.

Earlier this week the 20-year-old woman left her club in western Kabul, sheltered from prying eyes by a discreet but heavy metal door, to train her young pupils in the open air.

In black or pink satin pyjamas, their hair covered, they practise the modern sport derived from traditional Chinese arts mastered by, among others, the flying monks of Shaolin in northern China.

Mixing boxing and blade control, sabres and daggers, wushu can be a choreographed exhibition of acrobatics or a full-contact sport, a challenge to gravity that requires bodies of steel and rubber.

On the warm-up mat, faces sometimes twist under stress and pain as Azimi, a black belt, presses and pushes them.

Sima Azimi (L) in picture. Mixing boxing and blade control, sabres and daggers, wushu can be a choreographed exhibition of acrobatics or a full-contact sport, a challenge to gravity that requires bodies of steel and rubber. (AFP)

Azimi's family took refuge in Iran when she was two years old, with Afghanistan still under the Taliban regime. There the slender young woman was introduced to wushu.

When she returned one year ago she immediately opened her club in a stronghold of the ethnic Hazara community, of which she is a member, in Kabul.

"Unfortunately, we have only Hazara students here and I don't like this, I am not comfortable with this solo ethnicity in my club," she tells AFP, adding she wants to welcome girls from other communities.

'Demanding and complete'
Hazaras, a long persecuted Shiite minority, are among the most open people in Afghanistan. Women are freer in their movements and more independent; men less oppressive to them.

As a result, they are typically found in the young teams of cyclists, climbers, and runners in the country who are often anxious to "open the way for others".

"My family never opposed my class here, my father was just concerned for me, he found me too small and he feared I could get in trouble," said Soraya Rezayi, 19, with the silhouette of a twig like her fellow pupils.

"But thanks to my training I became more powerful," she adds. "If someone came to harass me I could certainly defend myself."

"I am the first lady in my family to do sport," says Latifa Safayi.

Aged just 15, she already sees a long way into the future: to overcome her parents' reluctance to let her train, she proclaimed her dream of "representing the country and ... raising the Afghan flag abroad".

"I want to change the image of Afghanistan, too well known for war and drugs," she vows.

Now she trains three times a week, the aches which overcame her body in the beginning, fading to a sport she describes as "demanding and complete".

For their master Sima, the biggest obstacle was readjusting to her country of origin.

"Iran is a developed country but here in Afghanistan there are some very conservative thoughts to fight," she says.

"But it is only up to women to do something for themselves. So please, get out, show your capabilities, and don't let anyone choose for yourself."

It is not only on the training mats that the young woman knows how to fight.

But her demonstration this week at the top of the hill of Sharak Haji Nabi, although a traditional rendezvous of Hazara walkers, attracted too much attention in a country where many still believe women should be veiled and confined to the home.

She does not plan to return soon, she confesses.