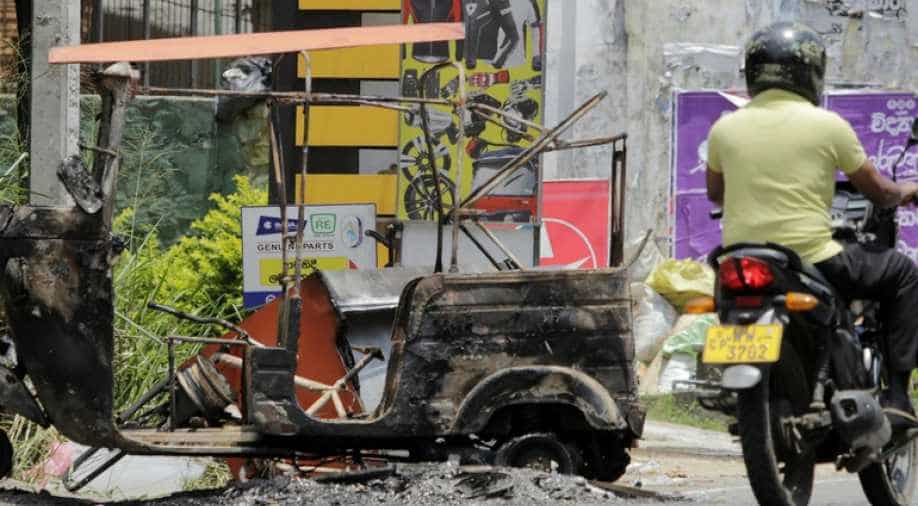 A Sri Lankan man rides a scooter past a burnt vehicle a day after anti-muslim riots erupted in Digana. Photograph:( AFP )

An investigation into anti-Muslim riots that spread in central Sri Lanka prompting the authorities to declare a nationwide state of emergency was announced Saturday by President Maithripala Sirisena.

A panel of three retired judges will probe the breakdown in law and order in the picturesque hill resort of Kandy, Sirisena's office said in a statement.

Three people died, 20 others were wounded and more than 200 Muslim-owned businesses and homes were destroyed in four days of rioting that died down on Thursday.

Eleven mosques were also damaged or completely destroyed by Sinhalese mobs, according to police who say the situation has been brought under control after a heavy military deployment.

A curfew in the district, which is 115 kilometres (72 miles) east of the capital Colombo, was lifted at dawn Saturday but army soldiers continued to patrol alongside police, officials said.

Sri Lanka's Muslim minority held their Friday prayers under military protection across the island amid fears of fresh attacks. However, the weekly religious activity went off without incident, authorities said.

Hundreds of Buddhist monks and activists staged demonstrations in Colombo on Friday denouncing the anti-Muslim attacks and urging authorities to take strong action against the perpetrators.

Police said nearly 150 people, including the main instigator, have been arrested over the unrest.

They named the main suspect as Amith Weerasinghe, a man from the mainly Buddhist Sinhalese majority known for anti-Muslim activism and outspoken social media posts, and said he was taken into custody on Thursday.

The government declared a state of emergency on Tuesday as the unrest escalated when a Muslim man was found dead in a burnt-out building, a day after a Sinhalese man died of injuries sustained in an attack carried out by Muslim men.