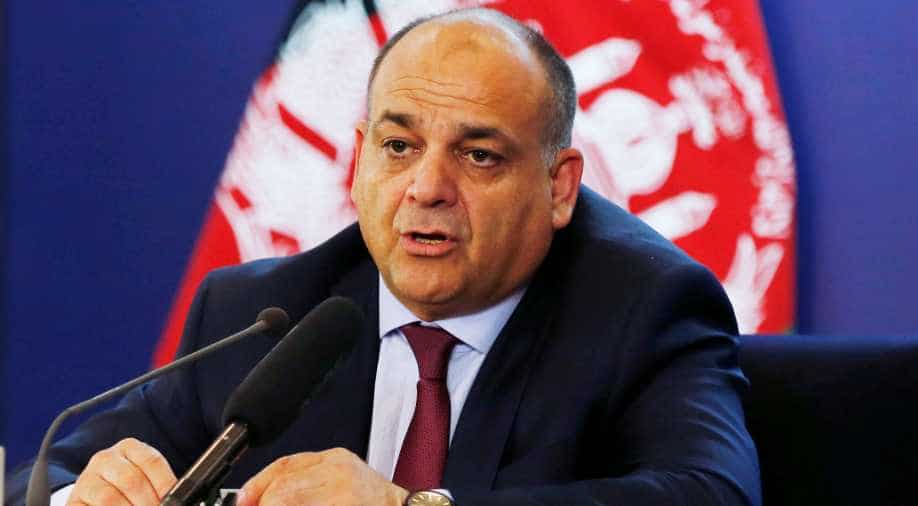 A public row that saw two top security officials trade recriminations live on television has sharply highlighted the divisions undermining Afghanistan's Western-backed government, even as insurgents have stepped up pressure on the battlefield.

The spat between Interior Minister Wais Barmak and Mohammad Sadiq Muradi, deputy police chief of Kabul, after a rocket attack on the capital, came at the end of a deadly few weeks in which the Taliban killed hundreds of soldiers and police and briefly seized the strategic city of Ghazni.

Commenting on the row, Interior Minister Barmak said: "Differences between officials over security issues do not reflect disarray, but, instead, proves that we are working towards improving strategy."

But last month's quarrel, broadcast live on local news channels, was only the most visible sign of the fractures tearing at President Ashraf Ghani's government as it struggles to contain the insurgency amid an increasingly fevered political climate ahead of parliamentary and presidential elections this year and next, according to government sources.

In the same week, National Security Adviser Hanif Atmar, one of the most powerful figures in the government, resigned amid speculation he is preparing to challenge Ghani in next year's presidential election.

While clearouts of senior officials have followed major security failures in the past, the divisions have hit confidence in the government just as a ceasefire in June had offered a brief glimpse of peace after 17 years of war.

"The Taliban knows that our top bosses are busy fighting inside conference rooms and are sending mixed signals to the forces on the ground... this helps them seize every opportunity to lay siege on cities and villages," said a minister in Kabul, speaking on condition of anonymity. "Our inherent flaw works in the Taliban's favour."

The row between Barmak and Muradi was a case in point, with the minister accusing the police commander of incompetence and Muradi complaining that his leaders were out of touch.

"I swear to God that nobody in the leadership of interior ministry listens to us," Muradi said, in response to Barmak's criticism that he had failed to prevent rocket attacks near the presidential palace and the diplomatic district of Kabul on Aug. 21.

The accusations reflect the disunity and lack of coordination between security officials that have repeatedly hampered the government's fight against the Taliban and other insurgent groups.

Heavy fighting between Taliban insurgents and Afghan forces across the country this year, as well as repeated suicide attacks in Kabul and other major cities, have underlined the dire security situation facing Afghanistan.

Last month, the Taliban rejected an Afghan government offer of a ceasefire to coincide with the Muslim Eid al-Adha holiday. A three-day ceasefire had been observed over the Eid al-Fitr festival in June.

National security adviser Atmar said he resigned because of "serious differences over policies and principles with government leadership".

Aides said he had argued with Ghani after warning that Ghazni, which sits on the main route linking Kabul to southern Afghanistan, needed to be reinforced and that the highway in particular was vulnerable.

They said Ghani had told him to draw up a proposal before additional troops were deployed, frustrating Atmar, who wanted to move immediately.

For their part, aides to the president say Atmar's resignation was a matter of political expediency ahead of his expected candidature in next year's election.

Ghani has responded by appointing Hamdullah Mohib, a 35-year-old former ambassador to the United States considered absolutely loyal to the president, as his new national security adviser. Facing criticism that he lacks experience and got the job mainly because of his loyalty to Ghani, he faces a daunting challenge.

"Mohib must start by resolving internal disputes, introduce reforms, because the Taliban's strength lies in the weakness of the government," said Haroun Mir, an independent political analyst.

The Taliban have mocked the disunity in the government, which it said reflected the failure of the strategy announced last year by U.S. President Donald Trump to force them to negotiate by stepping up air strikes and sending thousands more trainers to help the Afghan army.

"Enemy casualties have increased multifold, their expenditure has ballooned and the Kabul administration has taken further steps in corruption, instability, feuds and disagreements while having no achievements," the insurgents said in a recent statement.