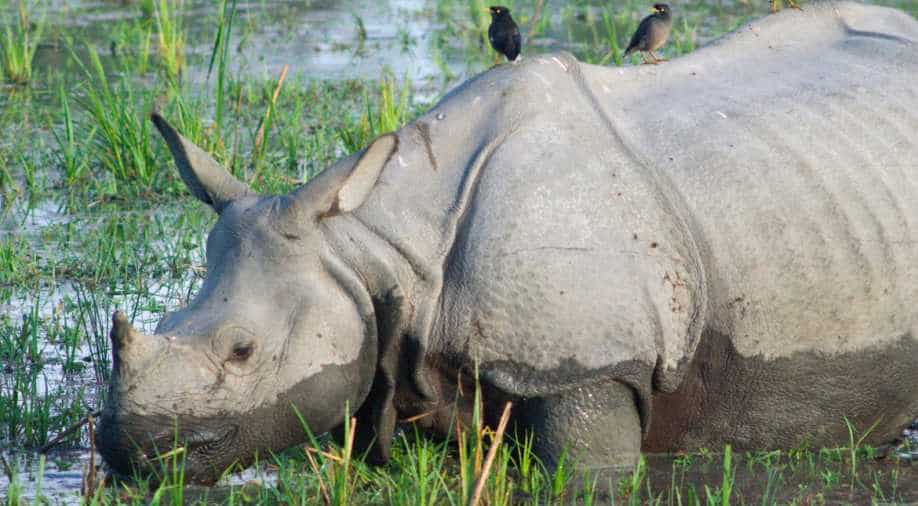 At least a dozen rhinos have been poached in Kaziranga in the first six months of this year, more than twice the number killed in the whole of 2006. Photograph:( Getty )

Follow Us
As night falls over the lush plains of India's Kaziranga national park, a small group of lightly armed forest guards sets out on foot to protect the world's largest population of one-horned rhinos. These men with their ageing rifles and small plastic torches are on the front line of the battle against increasingly sophisticated international poaching networks that prey on the rare animals, entering the park under cover of darkness to kill them for their horns.

A decade ago, India had all but declared victory over poaching in Kaziranga, a 430-square-kilometre (166-square-mile) protected area of forest in the northeastern state of Assam that is home to around 2,500 rhinos. But recent years have seen an alarming upsurge in the slaughter of the animals, whose horn is highly prized in neighbouring China and in Vietnam.

At least a dozen rhinos have been poached in Kaziranga in the first six months of this year, more than twice the number killed in the whole of 2006.

"The poaching network has become more systematic, stronger, more efficient," said Amit Sharma, senior coordinator for rhino conservation at World Wide Fund for Nature (WWF) India, who blames a surge in demand that has seen prices top $100,000 per kilo for the final product.

"The value of a horn has shot up like anything, that is why people are ready to risk their lives," he added.

Park rangers say they are woefully under-equipped to deal with the modern, sophisticated weapons used by the poachers, including AK47s and night-vision goggles. Many of the myriad insurgent groups operating in India's restive northeast are involved in the trade, which passes through the neighbouring state of Nagaland into Myanmar before being smuggled to China.

The issue is hugely emotive in Assam, where the rhino is both a source of pride and a big tourist draw. It hit global headlines in April when a rhino was poached on the very day that Britain's Prince William and his wife Kate visited the national park.

"Many years ago you would see rhinos everywhere around here", said local villager Damayanti Chhetri. "The poachers have no heart".

Local people are a vital source of information for the park rangers, providing tip-offs about upcoming poaching raids. But some are also in the pay of the poachers, who rely on their knowledge of the local terrain, according to one senior forest official.

"Locals know every corner of the park. Huge money is involved. It is a risky job, and still they do it," said the official.

The risks are high: Kaziranga's forest guards have the right to shoot suspected poachers on sight, and dozens have been killed over the last decade. The policy is controversial, but they argue it is justified as no one is allowed to enter the park without permission.

"If we see someone, without any enquiry we can shoot. We will presume that he is a poacher," said one guard who had killed a suspected poacher.

Two years ago Dipen Sawra, a 35-year-old father of two, failed to return home after a forest guard offered him work cutting firewood. He was later found dead with a bullet wound to the head.

"They were good friends, he (the guard) used to come and drink tea with us here," his father Vikari Sawra told AFP at the family's small mud and straw home.

"We never thought something like this would happen," he said.

The family say they never received a death certificate or the results of the post-mortem. The guard was arrested on a murder charge, but was later released, and his case is still pending.

Assam's new forests minister Pramila Rani Brahma told AFP in Guwahati that local poverty was fuelling the trade in rhino horn. But she has also ordered an investigation into forest officials suspected of collusion with the poachers.

Last month she suspended Kaziranga's director after he failed to inform her a rhino had been killed while she visited the park. A few weeks earlier, police arrested two forest guards on suspicion of covering up poaching after the corpse of a rhino was found buried in the park, its horn removed.

WWF India's Sharma does not believe park authorities are complicit in the trade but says the pressure they are under may be leading them to cover up incidents of poaching. Meanwhile, conviction rates are woefully low. Even when suspects are caught, they often get bail, leaving them free to re-offend.

To help police secure convictions, WWF India is working with the Assam government to set up a rhino DNA database -- a system already used in South Africa. Traffickers may be identified by evidence left when they handle the horns.

"Every rhino has a fingerprint in form of DNA", said Sharma. "In court it's going to be very easy to convict (with DNA evidence)."

But for him, the priority should be to provide the struggling forest guards with better equipment.

"The backbone on which we are trying to save our rhinos needs to be strengthened," he said. "They are our foot soldiers, without them we cannot protect our rhinos."