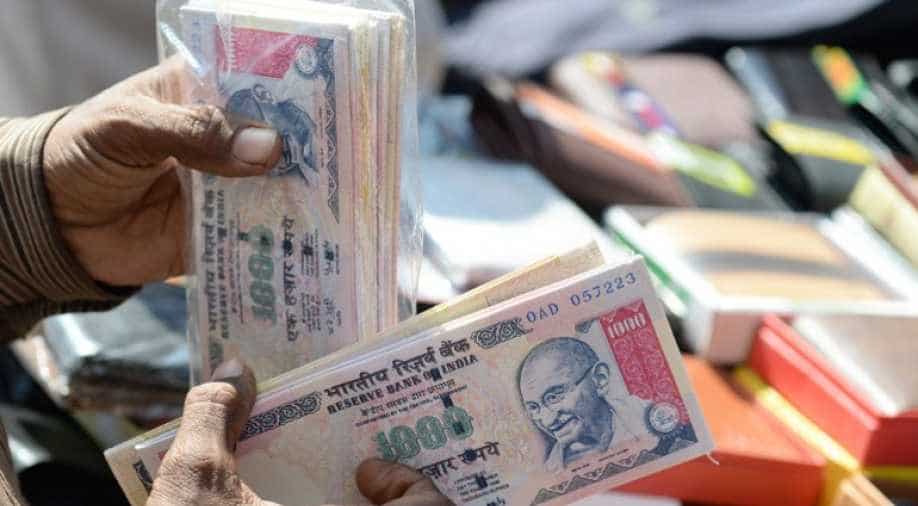 The report also points out that lack of proper investigation by the Income-Tax (I-T) department suggests that parties are able to cover up funds that may be dubious. Photograph:( AFP )

While Prime Minister Narendra Modi’s call for a debate on ways to crack down on alleged dubious funding to political parties has been welcomed, the previous United Progressive Alliance (UPA) government had skirted the issue, despite a committee making many suggestions on the issue.

The report, a copy of which DNA has accessed, was commissioned by the then Finance ministry through the Central Board of Direct Taxes (CBDT) in 2011 and it was submitted in 2013. It clearly stated that major political parties were heavily relying on black money through unaccounted political donations. The report never saw the light of day during the then government’s tenure.

The two-volume, hardbound blue-covered report, titled “Study of Unaccounted Income of India,” by the National Institute of Public Finance and Policy (NIPFP) grimly stated the scale of the problem.

“In the case of one party, the entire income from such donations is in tranches below Rs 20,000. In seven other cases, it is over 80 per cent. This implies that large amounts are being credited by these parties in their book of accounts as coupon sales or cash donation received from anonymous or unknown sources.” it said.

“Cash donations or coupon sales below Rs 20,000 is an open avenue for political parties to introduce any amount into their books of accounts, and also avail exemption from tax with no question asked. This is a venue open to serious misuse and the introduction of black money,” the report said.

Such damning findings beg two questions: why did the then government not take cognisance of the report? What was the role of the Election Commission (EC) in this regard?

The report also pointed out that though the EC had taken steps to standardise audit reports of parties, little action had been taken and even if implemented, “they were unlikely to put any real check on introduction of black money through these opaque sources (black money avenues).”

The report was vetted by 20 officials of the CBDT, which included KV Chaudhry (current CVC), Enforcement Directorate, Director of Revenue Intelligence, Financial Intelligence Unit, Election Commission and the then revenue secretary Sumit Bose.

Asked to comment on the report, SY Qureshi, then Chief Election Commissioner of India, confirmed its findings. “Currently, almost 80 per cent of funds to parties are being seen as cash collections from unknown sources and the EC has been protesting about it for a very long time. We would like total transparency and we have to ask that every political party be audited annually by an independent auditor and the audit report be put on the party’s website.”

Currently, the regulatory control of EC on the financial affairs of political parties is minimal, once the election period is over.There is evidence that a very large number of registered parties are not filing their contribution reports or audited statment of acounts with the EC.

The proforma of return form ITR 7, which political parties are required to submit is the same as that prescribed for ??Trusts and Section 25 companies. However, t?his is, for the most part, irrelevant to the type of information needed for the proper assessment of the income of political parties. Such a system does not require the particulars of contributions above or below Rs 20,000 to be reported separately.

?As the report points out, “there is no mechanism to know as to which political party has not filled the contribution statement (form 24A) under Section 29C of the Representation of People’s Act (RoPa) with the EC, or even its returns of income.”

The report also points out that lack of proper investigation by the Income-Tax (I-T) department suggests that parties are able to cover up funds that may be dubious.

“Although copies of election affidavits are forwarded by the EC to the I-T department, our discussions brought out that such actions rarely lead to any effective investigation or verification.

The main reason is that while the election affidavits have been designed as a statement of wealth of a candidate and his dependents, declaring the market value of the assets on a given date, the data available with the I-T department even in respect of those candidates who are assessed pertains to annual incomes,and not wealth,” the report said.

?Not surprisingly, the contents of this report, has put political parties on the defensive. While former finance minister P Chidambaram refused to comment, other parties were vocal.

BJP’s national spokesperson GVL Narsimha Rao told DNA: “I am sure the report is in possession of the Special Investigation Team (SIT), which has been constituted by our government and not by the UPA. Given that such information is under the possession of the SIT, it is entirely in its realm to use that report and decide on it. Our government does not have any role to play.”

Other parties insisted that a thorough probe was needed. Brinda Karat, CPM politburo member said the matter was under discussion between the EC and parties: “The EC has put this issue on the agenda of their discussions with parties.

Such donations should form only a small percentage of the income, but at present there is no such limit and parties take donations from corporates. My party does not take any money from corporates. Our coupon donations are all recorded. Our mass collections form a very small part of our income,” she said.

How to reform political funding

Separate return form for political parties. Special rules to check the opaque sources of funding, such as coupon sales. Returns of political parties and candidates must be made available for public scrutiny by making appropriate amendments in Section 138 of I-T Act. All parties and electoral trusts may be assessed centrally at the headquarters of Directorate-General of Income Tax (Exemption), Delhi. Parties should not receive any donation/contributions/Fees etc by whatever name from a single person or entity called exceeding Rs 10,000 in a year except through account payee cheques.

According to the report, in the case of one party, the entire income from such donations is in tranches below Rs 20,000.

In seven other cases, it is over 80 per cent.

Cash donations or coupon sales below Rs 20,000 is an open avenue for political parties to introduce any amount into their books of accounts, and also avail exemption from tax with no question asked.

This is a venue open to serious misuse and the introduction of black money.