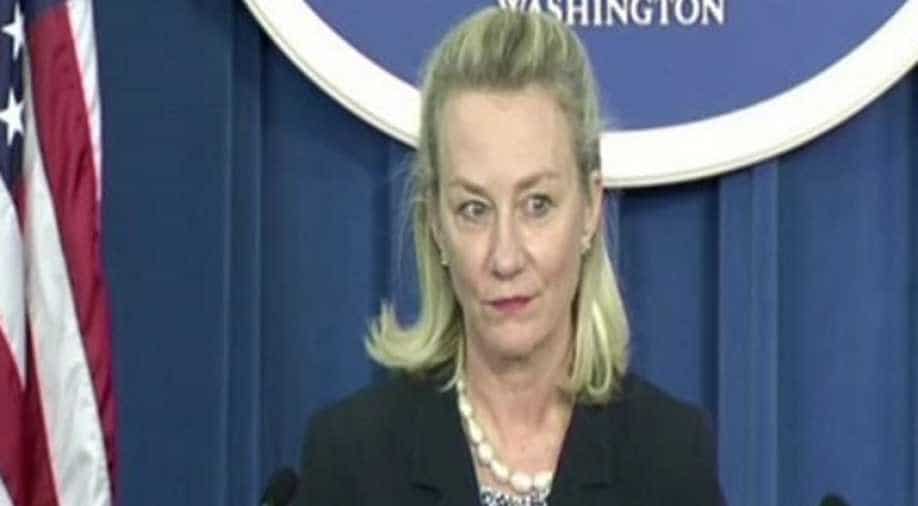 Principal Deputy Assistant Secretary for South and Central Asian Affairs Alice Wells underscored that Pakistan has a critical role to play in the long-term stability of Afghanistan.

She also added that Islamabad should take serious steps to take action against terrorist organisations for ensuring peace in the region.

Addressing a presser in Washington on Monday, Wells said, "We encourage Pakistan to take stronger steps to ensure that the Taliban comes to the negotiating table, rather than enjoying safe havens in the country. Both Pakistan and Afghanistan embarked an effort to improve their ties for negotiating a solidarity document which we strongly support."

Expressing grave concerns over terrorist organisations and proxy groups enjoying safe havens in Pakistan, Wells asserted that the new government should take strict action to ensure peace and stability in the region.

She elucidated, "We look forward to working with new government (in Pakistan). We are urging them to do more and bring pressure to these terrorist organisations. We welcome (Pakistan Prime Minister) Imran Khan`s words when he discussed the importance of having peace on both sides of the border."

The American diplomat underlined that while Afghan President Ashraf Ghani is putting forward a peace proposal in the interests of the Afghan people, it is the perfect time for all parties to come to the negotiating table, adding that the US wanted Pakistan to reinforce the message of peace and stability.

Talking of the South Asia strategy implemented by the Donald Trump administration, Wells said that India is playing a supporting role in ensuring the stability of war-torn Afghanistan.

She continued, "One of the key new features of strategy tapping is that India is supporting the economic development of Afghanistan up to 2020. We need to see Afghanistan stitched back into the region. We welcome that India has stepped up and enhanced this commitment and it enjoys a strategic partnership with Afghanistan not at the expense of any other countries in the region."

Throwing light on the Indo-Pacific region, the 55-year-old diplomat said that Washington wishes to build its long-standing commitment to the region and has taken important steps to ensure the region`s future is free, open and operate in a rule-based system.

Wells informed that the US conducted US $1.4 trillion in two-way trade with the countries in the Indo-Pacific region. She added that Washington made a major investment in strengthening security cooperation across the region.

Wells added, "More than US $100 million of funding will go to South Asia, which includes US $39 million for Bangladesh, US $14 million for Sri Lanka and US $17 million for Nepal. It will focus on maritime security, humanitarian assistance and disaster response, peacekeeping capabilities and counter transnational crime, which is the key for a free and open Indo-Pacific."

Wells stated that the Indo-Pacific strategy belonged to all and is all about underscoring a series of norms and commitments to achieve a free and open region.

Stressing on the `Quad` alliance, she continued, "There are many diplomatic architectures which are being used to promote Indo-Pacific strategy. ASEAN`s role is critical. Through a variety of trilateral and quadrilateral groupings that existed particularly countries that are very like-minded and the US, Japan, India and Australia are able to coordinate our approaches to the region to espouse on standards for infrastructure or identify areas where development tools can be overlapping and reinforcing."

Talking of the Indian Ocean Conference which is set to take place in Hanoi, Vietnam on August 27 and 28, the American diplomat said that the event would be hosted by the India Foundation along with its partners from Singapore, Sri Lanka, and Bangladesh and would focus on "Building Regional Architectures."

Wells further said, "South Asia is the least economically connected region in the world in terms of inter-regional trade. Building a stronger regional architecture would be my priority. The US would be lending its expertise to the Indian Ocean naval symposium, which is a forum to pursue collective actions on regional maritime security issues such as devastating natural disasters."

Stressing on the Bay of Bengal Initiative for Multi-Sectoral Technical and Economic Cooperation (BIMSTEC) organisation, the 55-year-old diplomat stressed that the forum would enhance capabilities of Sri Lanka and Bangladesh to share shipping information with India for detecting and responding to emerging maritime threats.

Well said, "More economically focused organisations of BIMSTEC and SAARC are offering important venues to drive conversations on regional connectivity on priority. All these org would allow us to build capacity within the Indian Ocean region on a more holistic level."